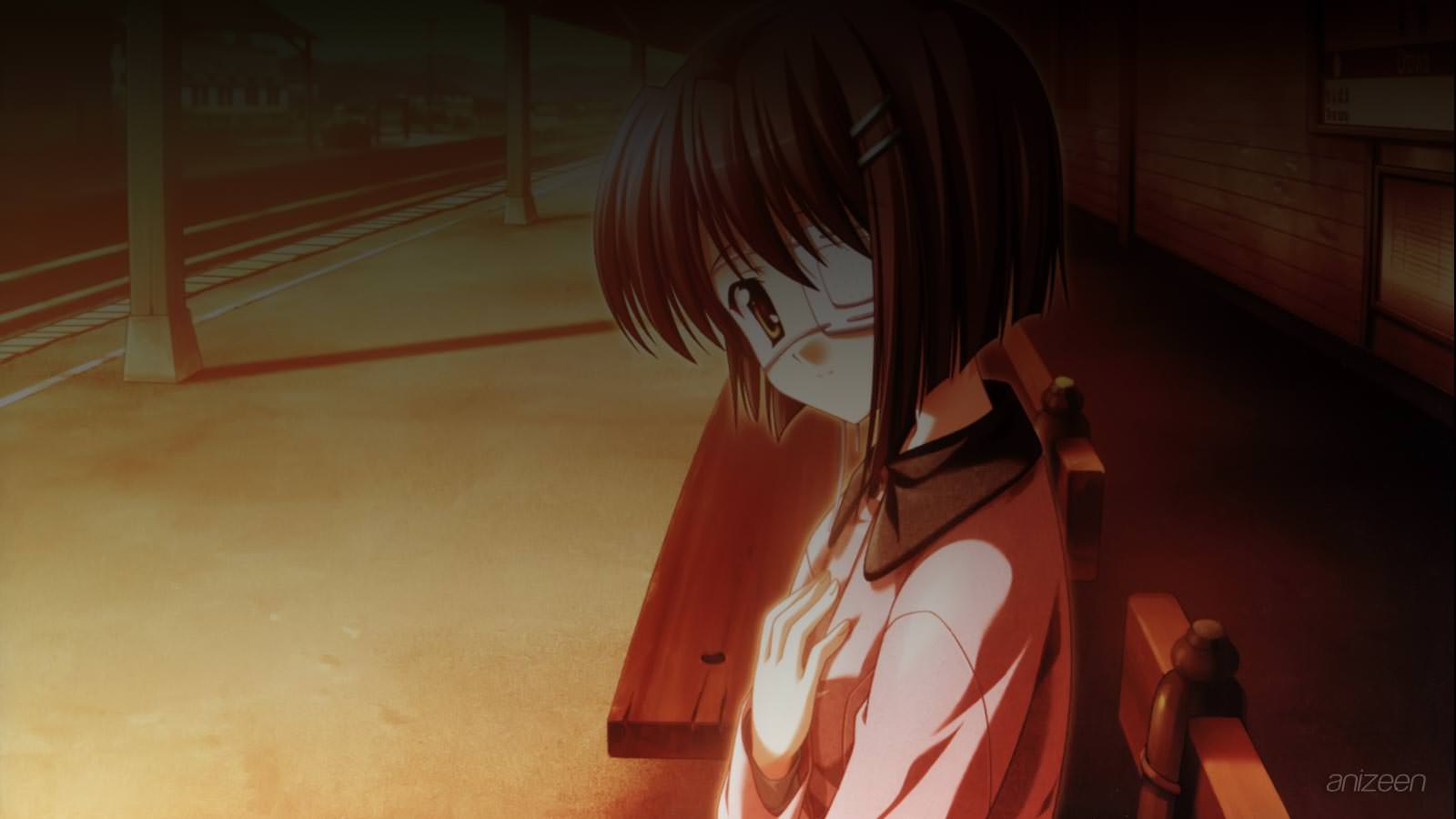 Renji Aso meets Chihiro Shindo at an abandoned train station one day after school, and returns to the same stations several days in a row to meet with her again, finally becoming friends with her on the third day.

While out during Christmas heading to his friend’s Christmas party, Hiro Hirono stops near a church where his bike was stolen by a girl who passes by chasing a purse snatcher. After catching up to her, he spends the rest of the night with her and finds out her name is Miyako Miyamura.

As a visual novel, ef – a tale of memories, consists of two parts with three chapters each. The first part is titled Ef: The First Tale. and primarily consists of the story of Hiro Hirono, Miyako Miyamura, Kyosuke Tsutsumi, Kei Shindo, and Yuko Amamiya. It consists of a prologue and two main chapters with Miyako as the focus for the first chapter, and Kei for the second.

This is followed by the second part of the story, Ef: The Latter Tale. which primarily deals with the story of Renji Aso, Chihiro Shindo, Shuichi Kuze, Mizuki Hayama, and Yu Himura. The second part consists of two more main chapters and an ending chapter, with Chihiro as the focus for the third chapter, and Mizuki for the fourth. Bringing the two parts together forms the all-encompassing Ef: A Fairy Tale of the Two.

Hiro Hirono is the main protagonist of the first chapter in the story. He is a high school student who is mainly interested in job as a manga artist of shoujo manga under the moniker “Nagi Shindo”. Hiro used the given name of his older sister Nagi Hirono, and a homophonic spelling of the family name of his childhood friend Kei Shindo to create the moniker. Writing manga causes him to lose interest in school and focuses mainly on his work in order to earn an income, as usually he does not have much money as it is. After meeting Miyako, he starts hanging out with her more.

Miyako Miyamura is the main heroine of the first chapter in the story. She met Hiro after stealing his bike on Christmas night while trying to catch a purse thief. She ended up destroying his bike, and she hung out with him for the rest of the night. Afterwards, they meet again at school; she too does not attend classes much because she finds them boring. Miyako has an energetic personality and enjoys doing unorthodox things. She eventually starts to become attracted to Hiro.

Kyosuke Tsutsumi is the main protagonist of the second chapter in the story. He has a passion for filming, and constantly carries a digital video recorder around with him. On Christmas night, he saw Kei Shindo running down the street and tried to get a shot of her, but a truck passed by, so he could not get a clean shot, plus he did not realize it was Kei at the time. After immersing himself in the thoughts of the mystery girl that Christmas night, he ends up quiting the film club and his girlfriend suggests they break up, which he agrees to as well. He eventually falls in love with Kei.

Kei Shindo is the main heroine of the second chapter in the story. She is Hiro’s childhood friend and is one year younger than Hiro; she attends the same school as him too. She is also Hiro’s neighbor, and she often has to go over to Hiro’s house to wake him up if he had spent the previous night drawing his manga. She is very athletic and is the start player of her school’s girl’s basketball team. She is attracted to Hiro, and becomes jealous when she finds out how much time he is spending with Miyako Miyamura.

Yuko Amamiya is a mysterious girl dressed like a nun who Hiro first meets in a church on Christmas night. She always appears generally out of no where, and disappears just as quickly in various places throughout the story to talk with Hiro or other characters and give them advice; interestingly, Miyako already knows her. She is the key figure throughout the entire Ef story.

ef – a tale of memories
(エフ ア フェアリー テイル オブ ザ トゥー)
Is related to Ef: A Fairy Tale of the Two. is the overall title of a two-part Japanese adult visual novel series by Minori for the PC as a DVD. The first game in the series, Ef: The First Tale., was released on December 22, 2006, and the second game, Ef: The Latter Tale., is planned for a release on May 30, 2008. The opening video for the game was animated by Makoto Shinkai, also known for The Place Promised in Our Early Days and 5 Centimeters Per Second. Before the release of the first game, a manga based on the overall story, drawn by artist Juri Miyabi, started serialization in the shounen manga magazine Dengeki Comic Gao! on February 27, 2005, published by MediaWorks. Also prior to the release of Ef: The First Tale., a light novel began serialization in Kadokawa Shoten’s seinen magazine Comptiq on June 10, 2006. Another two separate light novels were published in October 2007 by Fujimi Shobo. After the first visual novel’s release, an anime adaptation under the name Ef: A Tale of Memories. was produced by Shaft and began airing on October 7, 2007.
OP
S1. “euphoric field” ~ Tenmon feat. ELISA
ED
S1. “I’m here” ~ Hiroko Taguchi ep 1,3,7; “euphoric field” ~ Tenmon feat. ELISA ep 2; “Kizamu Kisetsu” ~ Junko Okada ep 4,5,9; “Sora no Yume” ~ Natsumi Yanase ep 6,8.
WEB