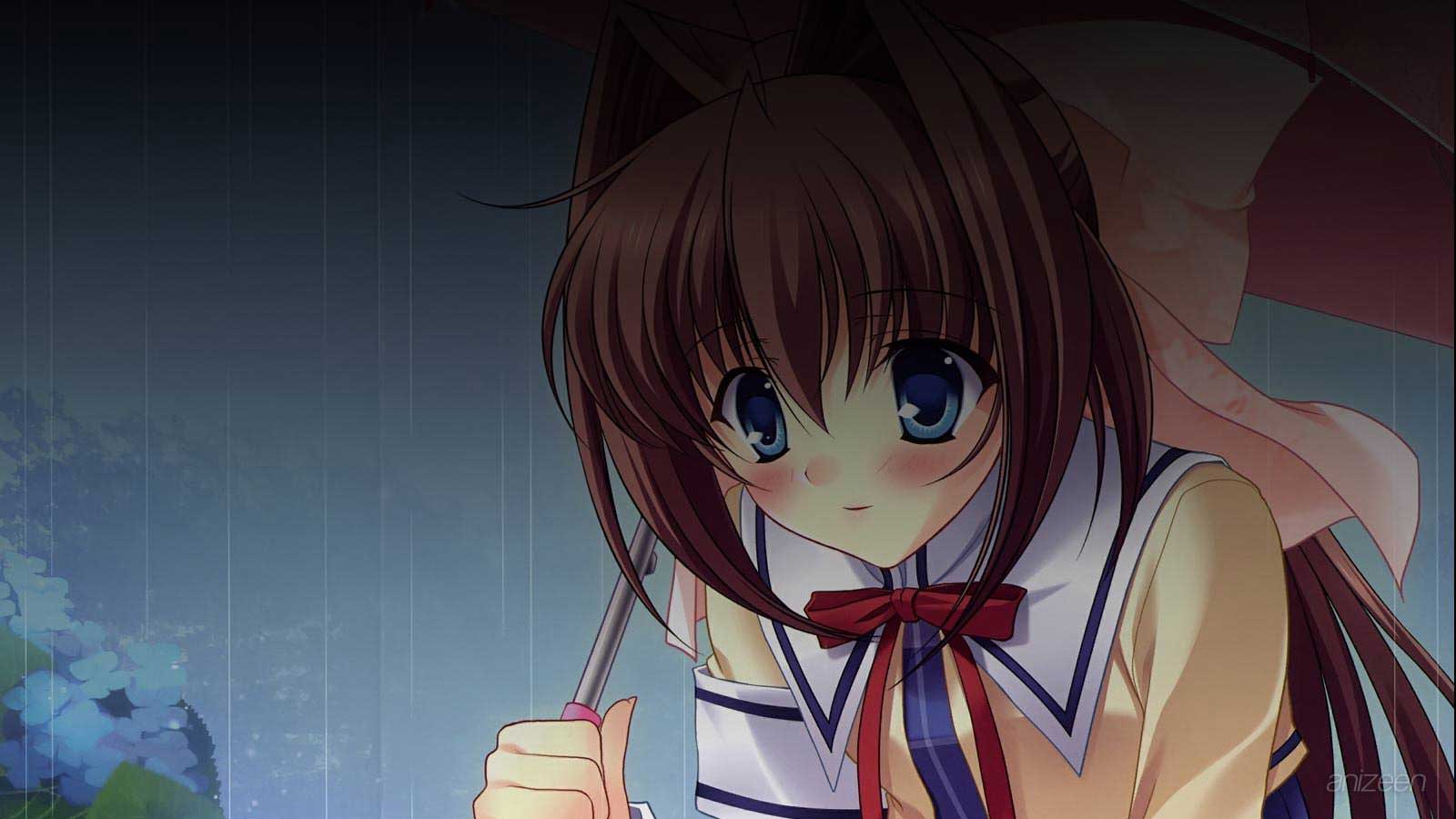 The protagonist, Yoshiyuki Sakurai, was born when Sakura Yoshino, weary of being alone for so long, wished upon a prototype artificial wish-granting magical sakura tree for a family. Years later, though, the tree starts malfunctioning, granting all wishes, regardless of how impure.

Sakura and Otome Asakura at first try to handle all the problems caused by it, but the situation gradually worsens and they have to choose whether or not to save Hatsunejima — the island in Japan where the story takes place — by deactivating the tree which would erase Yoshiyuki’s existence in the process.

Sakura makes a last-ditch effort to stop the tree by entering it directly, but fails. Yoshiyuki eventually manages to persuade Otome to choose the island over him, and she has the tree wither, revoking all the granted wishes, including Sakura’s.

In D.C. II, Yoshijuki is standing near a large sakura tree facing a girl whose face we can not see, as she is confessing her love for him. Yoshijuki wakes up in his room and realizes it was indeed just a dream. As such he quickly gets up and rushes out of his room, almost running over his ‘sister’, Yume, who had, apparently, come to wake him up. Before he gets to leave he is stopped by Yume, who complains she is hungry. Since Yoshijuki doesn’t have the time to cook anything, he uses ‘magic‘ to create wagashi for her.

Yoshiyuki Sakurai is the protagonist of Da Capo II. The son Sakura and Junichi never had, brought into existence by the new unwilting sakura tree. His name refers to this as well as it can be taken to mean “Yoshino born from within Sakura”. Like Junichi, Yoshiyuki can create wagashi with magic. He also appears to be able to see either the future or peoples desires and dreams when he himself is asleep, as shown when at the beginning of a couple episodes in the anime version where it shows a dream he is sharing with someone and later when the actual event occurs and he recognizes the relation between the reality and his dream.

Otome Asakura is the main heroine in the game and one of Junichi and Nemu’s granddaughters. She is the chairman of the student council. She refers to Yoshiyuki as “otouto-kun”, meaning “little brother”. Otome inherited her mother’s magical abilities.

Yume Asakura is Otome’s younger sister, and one of Junichi and Nemu’s granddaughters. Due to her magician blood, she sees the future in her dreams.

Nanaka Shirakawa is the school idol. She likes singing, but not in front of others. Like Kotori in the previous game, she has the power to read minds (due to a wish granted by the magical sakura tree), but only when she is touching the person whose mind she wants to read. She starts to fall in love with Yoshiyuki when he starts being genuinly worried about her and helps her when she is picked on by other girls for playing with guys’ feelings (even though those are just jealous rumors), but later she finds out he was worried about her not because he liked her, but because he saw her as a good friend.

Koko Tsukishima is a childhood friend of Yoshiyuki and Nanaka. During the beginning of the anime, she confesses her feelings for Sakurai, which Sakurai accepts and they start dating.

Minatsu Amakase is a robot who runs on bananas, but claims to hate them. She is upset over the fact that she is a robot but does not have a rocket punch.

Anzu Yukimura is one of Yoshiyuki’s classmates. Due to a wish granted by the magical sakura tree, she has the power to never forget anything.

Sakura Yoshino is one of the two returning characters from Da Capo. She is now the principal of Kazemi, the school Yoshiyuki goes attends, and still maintains her childlike appearance while being old enough to be a grandparent.

D.C. II ~Da Capo II~
(D.C.II ～ダ・カーポII～)
Is an adult Japanese visual novel developed by Circus which was released as a limited edition version on May 26, 2006 playable on the PC as a DVD; a regular edition followed on June 23, 2006. Da Capo II is apart of the ongoing Da Capo series of games by Circus, and is the direct sequel to Circus’ previous title D.C. ~Da Capo~ released in 2002. A sequel, D.C. II Spring Celebration, was released on April 27, 2007 and features springtime stories set after the endings for each of the six Da Capo II heroines. There have been three drama CDs, and two separate sets of novels and manga created based on the original game. An anime adaptation began airing in Japan on October 1, 2007 on TV Aichi, and is also being broadcast on other networks as well.
OP
S1. “Sakura Kimi ni Emu” ~ yozuca
ED
S1. “Yasashisa wa Ame no Youni” ~ CooRie
WEB