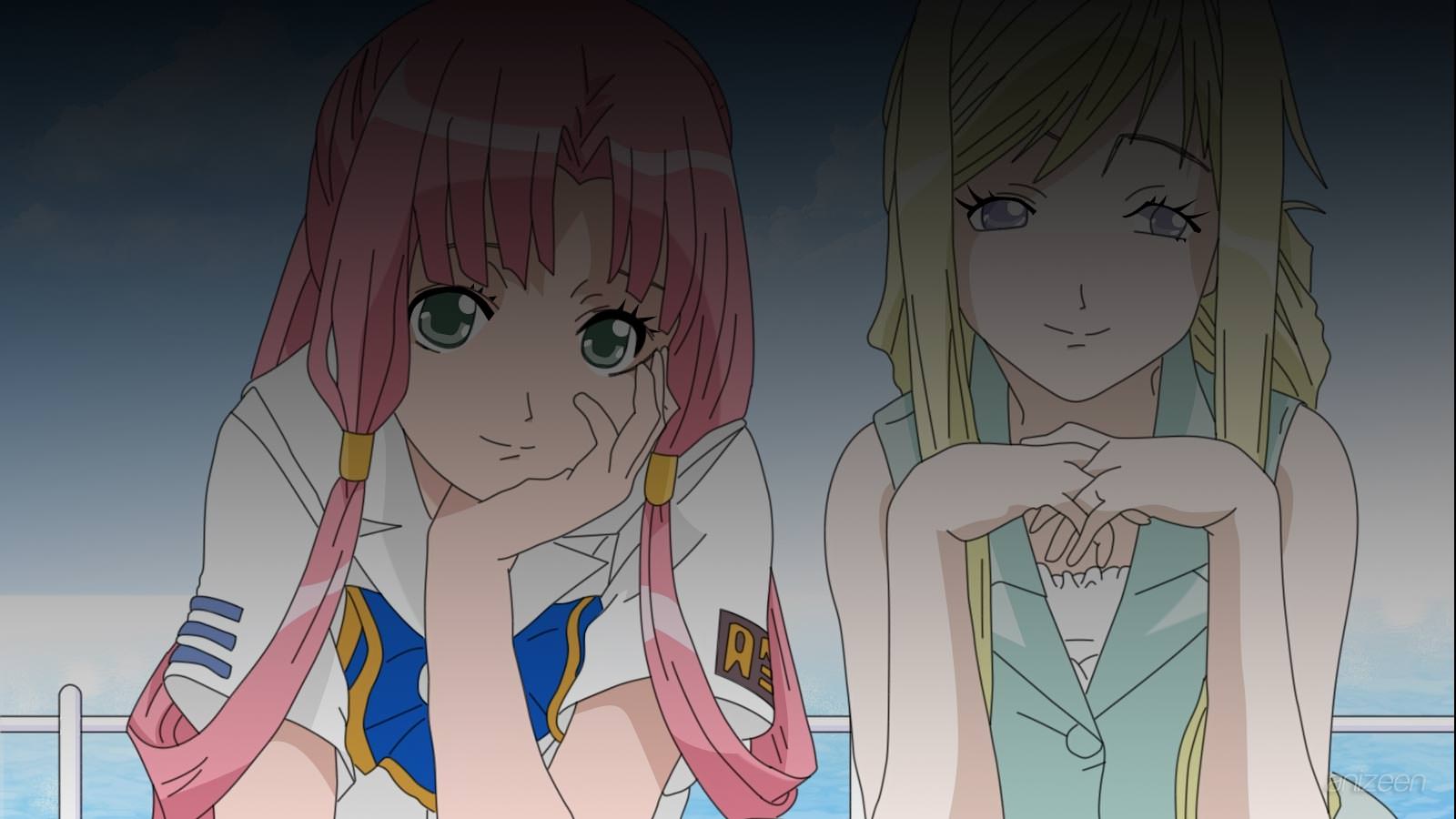 Aqua and Aria take place in the early twenty-fourth century, in the city of Neo-Venezia on the planet Aqua—formerly Mars, now renamed after being terraformed into a habitable planet covered in oceans. Neo-Venezia, based on Venice in both architecture and atmosphere, is a harbor city of narrow canals instead of streets, traveled by unmotorized gondolas.

At the start of Aqua, a young woman named Akari arrives from Manhome (formerly Earth) to become a trainee gondolier with Aria Company, one of the three most prestigious water-guide companies in the city. Her dream is to become an undine, as gondoliers who act as tour guides are called (see Terms below). As she trains, Akari befriends other trainees and neighbors around her. Aqua covers her arrival on Aqua and early training as a Pair, or apprentice, while Aria continues her training as a Single, or journeyman.

For ARIA ~ The ORIGINATION, nothing much has changed, so if you loved them, you’ll feel a warm sense of nostalgia watching the third season. From the beginning, you are thrown back into the world of Neo-Venezia and reintroduced to all the characters from the main cast of Alicia, Akira and Athena and their juniors Akari, Aika and Alice, as well as side characters like Al-kun, Akatsuki, Woody and the ever lovable trio of feline presidents.

Slow days come after the winter carnivale on Neo-Venezia, a time where the city shows its true calmness after the festivities and rush of tourists and vacationers dies down. Alicia and Akari receive a gift from one of their customers during the festival, some cherry jam and tea, and decide to invite everyone over, since it’s been a while since they’ve last gotten together.

After a day of shopping and baking, the group arrives and talks shift to various times in the carnivale when the great water faeries showed their prowess as undine, making Akari, Aika and Alice realize how much further they have to catch up. But Akira reminds them that they too have much to learn, that one must always strive to better themselves day by day, so having the long road of improvement ahead of them is only natural.

Akari Mizunashi is a native of Manhome who emigrated to Aqua when she was 15 to become an undine. While not as skillful at sculling a gondola as Alice, nor as familiar with the history of her adopted city as Aika, Akari makes friends quickly and converses easily with customers and other strangers. She finds enjoyment in things or events that others think humdrum and mundane, for which Aika and Alicia call her “mysterious.” Akari often says hohe or hahi, which is her short version of “wow.” When Akari used gondola simulations on Manhome, she accidentally learned how to row backwards and had to relearn the proper method when she started at Aria Company; however, as Aika notes, “Akari is almost invincible when she rows backwards.”

Alicia Florence is the only other undine with Aria Company, one of the three Water Fairies of Neo-Venezia. At the start of the series, she is 19 and the most popular undine in the city. Like Akari, she is relaxed and easy-going, but she also has a playful side that comes out when she teases others (especially Akira). Her favorite words are ara ara (“well well”) and she frequently giggles, to Akira’s annoyance.

Akino Ametsuchi is a famous and longest-serving Prima undine, who started Aria company with Aria Pokoteng after realizing she was missing too much of life as Himeya’s top ace. She was Prima undine for 30 years and mentor to Alicia, her last disciple, to whom she left the company on her retirement. She is highly respected by young undines, especially Alice, and is known as “Grandmother” or more informally “Grandma”.

Aika S. Granzchesta is the first friend Akari makes on Aqua, Aika is 16 when they meet. Aika is a Pair and then Single at Himeya Company. She is the only daughter and heir of Himeya’s owners, but does not enjoy the distinction as she feels the company’s employees fawned on her too much. Aika speaks in an open and blunt manner, and often responds to Akari’s idealistic comments with “Embarrassing remarks are not allowed!”. Despite their contrasting personalities, she gets along well with Akari, and later with Alice. She is proud of her skill as an undine, and can be very competitive about it. She also greatly admires Alicia, and finds any excuse to visit Aria Company—and once says that if not for her family obligations, she would join Aria Company. Over the course of the series, Aika develops feelings for Al.

Akira E. Ferrari is one of Neo-Venezia’s three Water Fairies, and a native of Aqua. As a Prima undine, Akira is called the “Crimson Rose”, and is famous for her conversational skills. She has many admirers among her customers, more of them female than male—which she admits bothers her, as she considers herself very feminine. Akira is Aika’s supervisor with the Himeya Company, who calls her the Demon Instructor for her strictness as a trainer and her loud, brusque personality. She is particularly harsh with Aika because she believes there is potential in her; Aika admits that it is only due to Akira’s strictness (and honesty) that she has become a good undine.

Alice Carroll is an undine for Orange Planet. Although initially only a Pair, her sculling already surpasses both Aika and Akari’s—for which skill she was was scouted by Orange Planet despite her age. Despite working for rival companies, Alice, Akari, and Aika often practice together, and Alice sincerely enjoys the others’ company. Because of her age and lower status, Aika often addresses her as “kouhai-chan”. Through her friendship with Akari and Aika, Alice lightens up as the series progresses. This does not stop her from telling the other girls to be quiet when they argue, however. For a long time, Alice is not confident in singing skills, until Athena advises her simply enjoy what she sings and not worry about her performance.

Athena Glory is the third Water Fairy of Neo-Venezia, known as the “Siren”for her beautiful singing voice. She is as Alice’s mentor at Orange Planet. She is quiet most of the time, and often appears to be an airhead who does not pay attention to her surroundings (in the anime, she once forgets to duck when she rows under a bridge), but she genuinely cares about Alice. Athena has a strange laugh that comes out sounding as though she is angry. She was a trainee undine with Alicia and Akira, and joined them in joint practice sessions much like Akari, Aika, and Alice do now.

ARIA ~ The ORIGINATION
(水星领航员 第3季 ～ The ORIGINATION)
Is based on the ongoing science fiction manga by Kozue Amano. The series was originally titled Aqua when it was published by Enix in the magazine Monthly Stencil, then retitled when it moved to Mag Garden’s magazine Comic Blade. Aqua was published in Stencil from 2001 to 2002 and collected in two tankoubon volumes. Aria has been serialized in Comic Blade since November 2002, and collected in eleven volumes as of December 2007. The last chapter is scheduled to be published in the April 2008 issue of Comic Blade, with the twelfth and final volume to be published on 10 March 2008. The series has been adapted as an anime television series, with a first season broadcast in 2005 and a second season in 2006, plus an OVA released September 2007. A third season began airing on 8 January 2008, and is scheduled to end around the same time as the manga serialization.
OP
S1. “Spirale” ~ Yui Makino
ED
S1. “Kin no Nami Sen no Nami” ~ Akino Arai
WEB