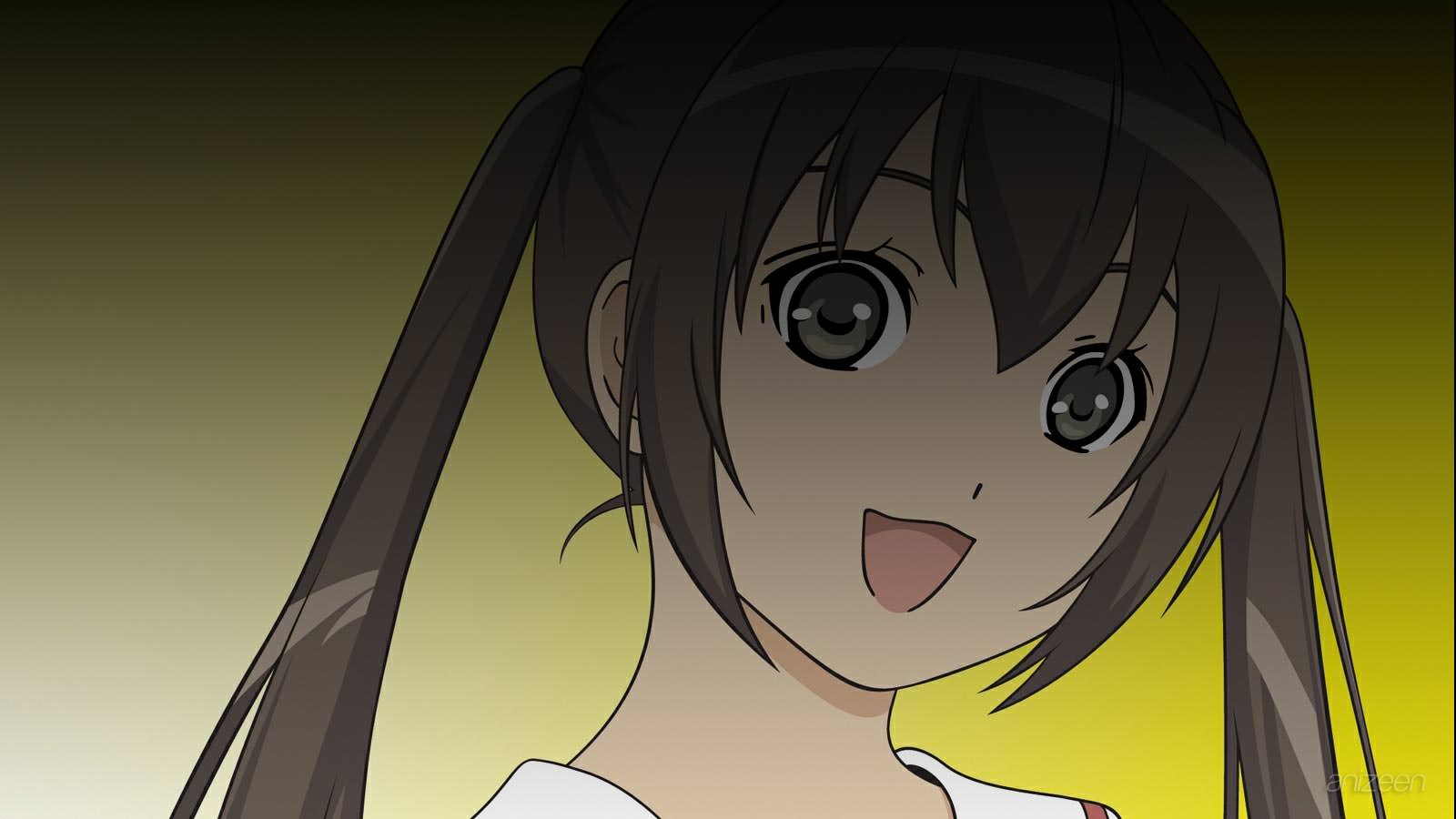 As they don’t have parents, the eldest sister, Haruka, does most of the housekeeping chores although she goes to high school. The second sister, Kana, is a junior high school student. She is a cheerful girl but a bit of an airhead. Chiaki still attends elementary school, but she is a cool and ironic person, and often makes a fool of Kana. Most of the stories are scenes of their daily lives, and they progress normally without remarkable climaxes.

In Minami-ke ~Okawari~, Kana gets off of the phone with Uchida Yuka, before getting into the usual trouble with Chiaki. Kana also wonders why their uncle Takeru is with them on the break, but it is obviously because he has nothing better to do. Kana expresses her wish for Haruka to preform for them, and even Chiaki is unable to resist agreeing with her.

Kana answers the door while Haruka prepares, finding Makoto and Touma in normal clothing. Makoto suggests that he would like to return to being a normal boy, but Kana denies his entrance in that appearance. Kana finally lets the two in after Makoto changes his appearance, making Mako-chan despair inside afterwards.

When Kana suddenly mentions her belief that Chiaki has eaten some of her cake, she gets scolded by her younger sister. After eating some ramen, the group suggests they want to travel somewhere. They don’t believe this is realistic, until Takeru walks into the room after returning with drinks.

Takeru begins driving the group to their location, with a bit of trouble after hearing Kana’s usual thoughts. Takeru brings up Fujioka’s coming along with them to Haruka, but she is more concerned with the directions to their location. Kana finally reveals that they are going to a hot spring, putting Mako-chan and Touma in panic.

The Minami sisters enjoy themselves in the bath when they get there, while Mako-chan and Touma struggle outside. Touma suddenly realizes that there is no problem with her entering, as she is not hiding anything, so she leaves Mako-chan behind.

Haruka Minami is the oldest sister and in her second year of high school. She has been taking care of her younger sisters since she was young, and this fact has led to some misunderstandings with her classmates. Haruka is the most reliable among the three, but becomes infinitely bored when she is by herself. She was called Banchou (gang leader) during her junior-high days, though it is revealed soon after that it was simply a title.

Kana Minami is the middle sister in her second year of junior-high school. Kana is a lively girl who never thinks before acting. She often acts or talks impolitely without thinking, much to the annoyance of Chiaki. Other than that, she thinks everything she gets as a challenge, like the love letter from Fujioka. She generally does not get good grades in school, though she thinks that if she puts on Keiko’s glasses she will act and speak smartly.

Chiaki Minami is the youngest sister in elementary school. She is in class 5-2 (a reference to Kyo no Gononi). Her apparent high intelligence often makes her overanalyse simple stuff. She also tends to ignore idiotic behaviour displayed by Kana and Makoto. Even being the youngest, she is the meanest out of the three; most of the time, she is quiet during group activities, and almost always uses the word “bakayarou”, which is a more forceful form for “idiot” in Japanese (“baka” being the less forceful term).

Touma Minami is the only daughter in the other Minami family. She is a tomboy girl in class 5-1 who, despite having the same surname, is not related to the Minami sisters. However, Chiaki adopted her as a little brother because of the same surname. She has three older brothers that know nothing about her. Her tomboy action can be said to be an influence by her brothers

Makoto is one of Chiaki’s classmate. He is nicknamed “stupid child” which his classmates believe is more of an impression of him than a nickname. He has a crush on Haruka, and goes as far as cross dressing in order to see her at the Minami residence. When he crossdresses, he is referred to as “Mako-chan”.