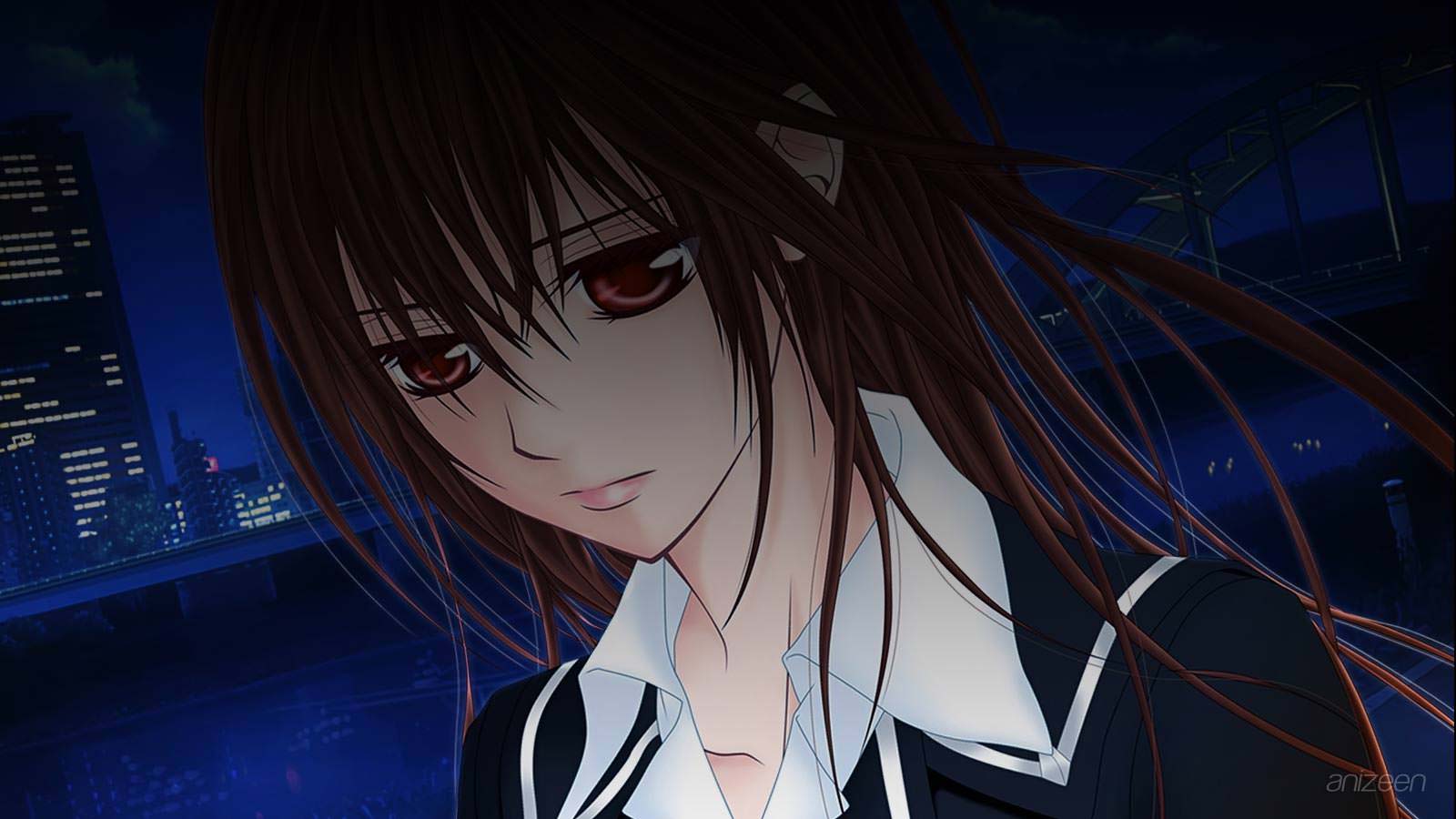 Yuuki’s earliest memory is of a snowy night in winter, when she was attacked by one vampire and was saved by another, Kaname Kuran. Ten years later, Yuuki Cross, the adopted daughter of the headmaster of Cross Academy, has grown up and become a guardian for the school, with two purposes: To protect the Day class humans from the Night class’s vampires fangs and to protect the true identity of the Night class students from being discovered by the Day class students.

Her fellow guardian, Zero Kiryu, a childhood friend who was born into a family of vampire hunters and whose hatred for the vampires that destroyed everything he held dear, is now determined to kill them all and never trusts them. Through a cruel twist of fate, Zero becomes a vampire himself, having been bitten by a pure blood vampire four years before.

Kaname, Yuuki’s savior, leads the group of Night class, with the help of Takuma Ichijo. As the story progresses, it is revealed that Yuuki is the true daughter of the Kuran family, a family of pure blood vampires. She and Kaname were raised as siblings who are actually engaged to each other. Kaname awakened Yuuki’s ‘vampire’ side which was locked away by Yuuki’s deceased mother, who wanted Yuuki to have a better future by being a human.

The vampires in Vampire Knight have the characteristics of a separate species, which contrasts with most vampire stories which portray vampires as transformed humans. In Vampire Knight, vampires can have children among themselves and with humans, and they age, albeit at a much slower rate than humans.

Vampires are nocturnal and they dislike sunlight, but exposure to it does not harm them. They are likewise immune to most of the traditional vampire weaknesses such as crosses, garlic, and holy water. They can also regenerate quickly and easily when wounded, therefore, making them very hard to kill unless a weapon made especially for vampire hunting is used.

Yuuki Cross, or Yuuki Kuran, is the adoptive daughter of the headmaster of Cross Academy, and is a member of the school’s disciplinary committee, which is a Guardian for Cross Academy. Ten years prior to the events of Vampire Knight, the Kuran family was attacked by Rido Kuran, so Yuuki’s mother Juuri, wanting Yuuki to live as a normal human, sealed Yuuki’s memories, powers and pure vampire blood at the cost of her own life, and Headmaster Cross took her in. She lost all memories of her life before the attack, but since Kaname rescued her when she was attacked by a vampire, she has been harboring deep feelings for him. She admired Kaname since she was small until present time. Yuuki is usually a cheerful and carefree girl. She has also let Zero Kiryuu, a childhood best friend, drink her blood, hoping to save him from insanity.

Zero Kiryuu is Yuuki’s childhood best friend. Zero is also a Cross Academy Guardian and likewise on the disciplinary committee. Yuuki has cared about him as a close friend ever since he was brought into their home, the Headmaster’s. His family, one of vampire hunters, was murdered by the pureblood vampire Shizuka Hiou when he was young. He harbors a deep hatred for vampires and claims to have taken on the role of Guardian to learn how to hunt them better. In truth, Zero was bitten during the attack on his family and therefore was turned into a vampire, something that has been kept secret even from Yuuki until his vampiric urges began to surface and became uncontrollable. As Zero’s body rejects the blood tablets that most vampires take to control their hunger, Yuuki began letting him drink her own blood, which helps his thirst for blood.

Kaname Kuran is a pureblood vampire who saved Yuuki from an attack by another vampire when she was 5 years old. Kaname is the class president of the Night Class, both feared and respected by the other Night Class students. While he is cold and authoritative towards his contemporaries in the Night Class, he is always kind and sweet to Yuuki. He has shown that he cares for Yuuki in a romantic sense ever since he saved her. He is also Yuuki’s fiancee and “so called” brother. Apparently, he allows Zero to live because he knows his death would sadden Yuuki and because when he cannot protect Yuuki, he knows that Zero will be there.

Sayori Wakaba is Yuuki’s dorm-mate and best friend since junior high, Yuuki often refers to her as Yori-Chan. Yori seems to be one of the few girls who is not interested in the night class. She finds them a bit scary and stated that she would prefer someone from the day class. Yori is also very observant, as she notices a lot of things that happen to Yuuki, especially when she gets hurt or is very depressed.

Ichiru Kiryuu is Zero’s younger twin brother. When they were younger, they were both taught by Toga Yagari to become vampire hunters. Ichiru, however did not seem to share Zero’s natural ability and was often ill. Zero and Ichiru were very close as children, although later Ichiru claims to have hated Zero after overhearing that his parents preferred Zero over himself. Shizuka let Ichiru drink her blood to strengthen him and cure his chronic ill health, although she did not turn him into a vampire and he remains a human.

Shizuka Hiou is the pureblood vampire who bit Zero; even her fellow vampires are uneasy around her. She is called “Madly Blooming Princess” by her fellow vampires. A manservant whom she loved, a former human vampire, falsely classified by the Hunter’s Association as Level E, was assigned to be killed by a Kiryuu vampire hunter.

Headmaster Kaien Cross is Yuuki’s adoptive father, who also took Zero into his home for several years. Headmaster Cross dreams of peace between humans and vampires, and established the Night Class to promote understanding between the two races. Cross is shown to have a habit of provoking Zero and is eccentric in some ways, but he has a serious side as well.

Vampire Knight
(ヴァンパイア騎士)
Is a shoujo manga written by Matsuri Hino. The series premiered in the January 2005 issue LaLa magazine and is still on-going. Chapters are collected and published in collected volumes by Hakusensha. Two drama CDs were created for the series, as well as a twenty-six episode anime adaptation. Produced by Studio DEEN, the anime series premiered in Japan on TV Tokyo on April 7, 2008 and is still airing. The anime uses many of the same voice actors as was used for the drama CDs.
OP
S1. “Futatsu no Kodou to Akai Tsumi” ~ ON/OFF
ED
S1. “still doll” ~ Kanon Wakeshima
WEB