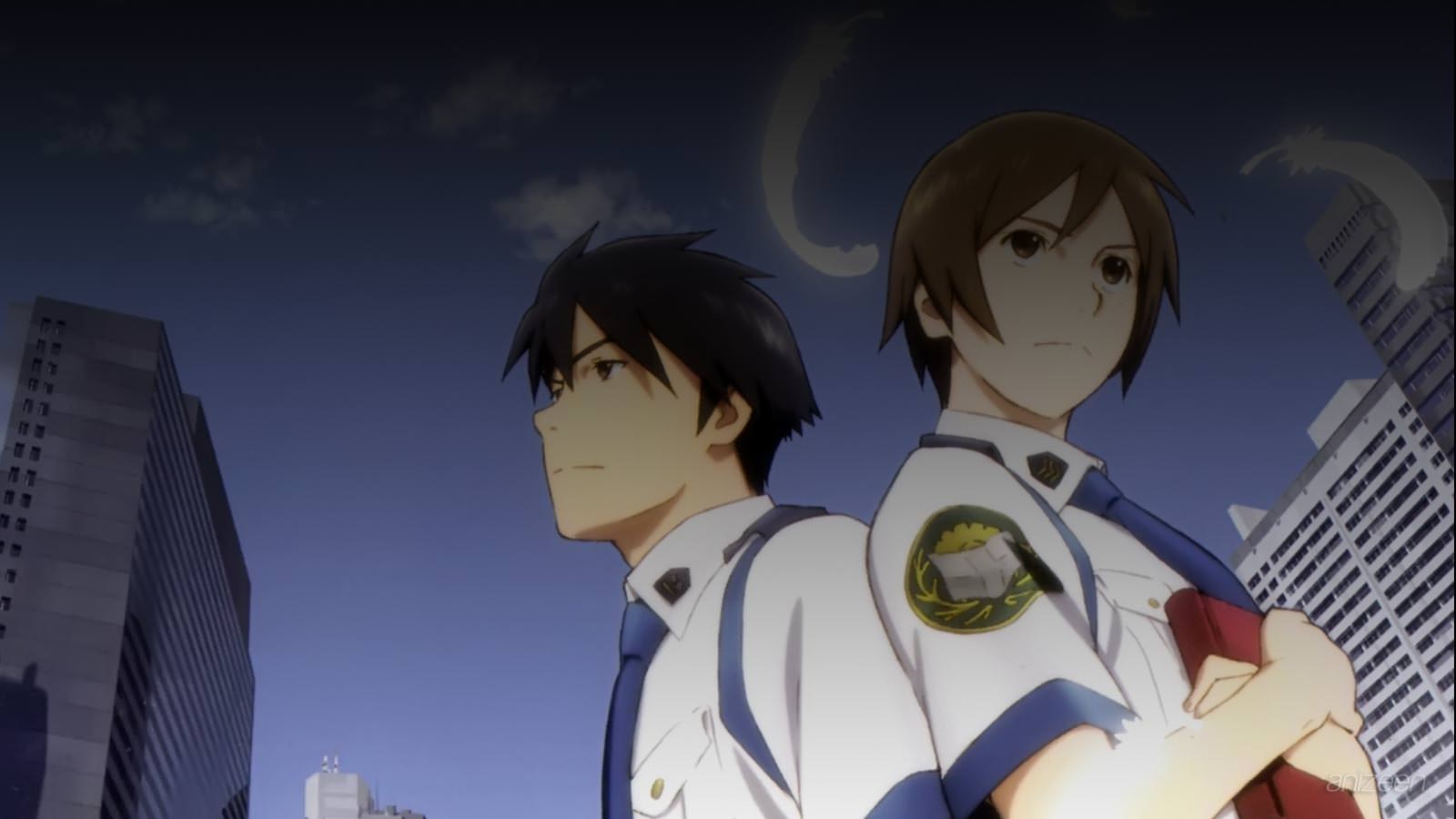 Toshokan Sensou involves the Japanese government passing the Media Betterment Act (MBA) as law in 1989 which allows the censorship of any media deemed to be potentially harmful to Japanese society by deploying agents in the Media Betterment Committee (MBC) with the mandate to go after individuals and organizations that are trying to exercise the act of conducting freedom of expression activities in the media.

However, local governments opposed to the Media Betterment Act establishes armed anti-MBA defense force units to protect libraries from being raided by MBC agents under the Freedom of the Libraries Law. The conflict between MBC agents and library soldiers has continued to 2019, when the story begins. In accordance with the Japanese era calendar scheme, 1989 in Toshokan Sensou is rendered the first year of the fictional Seika era, rendering 2019 as Seika 31.

Iku Kasahara is a new recruit in the Kantou Library Base who joined in 2019 after being inspired by a high ranking Kantou Library Defense Force member who saved a book she wanted to buy that was targeted for censorship. After joining, however, she finds the pace to be very demanding, and that her drill instructor Atsushi Dojo seems to have it out for her by making it especially difficult for her.

On multiple occasions, Kasahara shows herself to be reckless, particularly when she puts Dojo in danger by not securing a criminal in the base’s library, and later getting involved with Media Betterment Committee agents despite not being a high enough ranked official; in both instances Dojo has to help her out of trouble. Despite these imperfections, Kasahara is enlisted into the base’s Library Task Force, an elite group of soldiers who go through rigorous training in order to respond during difficult operations.

This is partially due to Dojo realizing that he did not give Kasahara adequate training, so he gives his recommendation that she join the task force, of which he is a member of, in order to correct this mistake on his part.

Iku Kasahara is twenty-two-years-old and is ranked Librarian First Class. She joined the Library Defense Force’s Kantou Library Base in 2019 after being inspired by a high ranking Kantou Library Defense Force member who saved a book she wanted to buy that was targeted for censorship. She holds this unknown person in high regard, thinking of him as her “prince”, and she wants to be an “ally of justice” as he was for her. As such, she has a strong sense of justice when it comes to freedom of expression and is willing to put her life on the line for the books she has sworn to protect.

Atsushi Dojo is a twenty-seven-year-old member of the Library Task Force and is ranked Library Officer Second Class. He is very rough on Kasahara due to her not inspiring enough trust in him, and the fact that he believes he did not give her adequate recruit training. Part of the reason why he pushes Kasahara so much is that he sees his old self in her, and he is angry that she is bringing that back to him with such emotional force, despite him trying to forget about it. He later realizes that he hurt her just so he could protect his fragile self. He often worries about Kasahara and even defends her from comments from others.

Mikihisa Komaki, like Dojo, is twenty-seven-years-old, is a member of the Library Task Force, and is ranked Library Officer Second Class. He is typically seen smiling or laughing at his coworkers, especially concerning the conversations between Kasahara and Dojo. He is also one of the instructors in the task force. He often gives advice to Dojo or Kasahara in regards to the relationship between them, whether it be on a personal or professional level. He is party due to Kasahara being drafted into the task force.

Hikaru Tezuka is a member of the Library Task Force and is ranked Librarian First Class. He is drafted into the Library Task Force at the same time as Kasahara, though shows himself to be much more capable in terms of knowledge gained in lectures, clerical work in the base’s library, and in typical combat. He finds it hard to give credit to Kasahara in the beginning since she is not up to what he considers to be the standards of a Library Task Force member, though he later recognizes her improvement. Due to a comment by Dojo that he could learn some things from her, Tezuka asked Kasahara if she would date him, though she later turns him down.

Asako Shibasaki is in the Library Task Force and is ranked Librarian First Class. She works on the inside as an informant in military intelligence, and is very good at gathering information. She is Kasahara’s roommate, and after Kasahara joins the task force, Shibasaki helps her study the catalogs in the base’s library through a form of negative reinforcement involving giving her candy when she gave the wrong answers which leads her to break out in pimples.

Ryusuke Genda is the forty-three-year-old captain of the Library Task Force and is ranked Library Supervisor Third Class. It is partly due to him that Kasahara is drafted into the task force, though since he is the captain, he had the final say. He is very strong, and Kasahara even thinks he has enough brawn to take on a bear full force. He is skilled in military command operations and in politics, such as giving Media Betterment Act agents books and magazines the Library Defense Force had copies of during an operation so that they do not leave empty handed either.

Kazuichi Inamine is the commander of the Library Defense Forces who is in direct charge of the Kantou Library Base and has been involved with the conflict between the Media Betterment Committee and the Library Defense Force since early on. Twenty years prior to the beginning of the story, a major conflict between the two factions occurred at the library in Hino, Tokyo where a group siding with the Media Betterment Act raided the library. Inamine was caught in the middle of the conflict and lost his wife and his right leg because of it.

Toshokan Sensou
(図書館戦争)
Is a Japanese light novel series by Hiro Arikawa, with illustrations by Sukumo Adabana. There are four novels in the series, though only the first novel is called Toshokan Sensou; the subsequent novels are named Toshokan Nairan, Toshokan Kiki, and Toshokan Kakumei. The novels were published by MediaWorks between February 2006 and November 2007. The first volume of a spin-off series entitled Bessatsu Toshokan Sensou was published on April 10, 2008 by ASCII Media Works. A manga adaptation by Kiiro Yumi started serialization in the shoujo manga magazine LaLa on September 24, 2007 published by Hakusensha; another manga adaptation by Yayoi Furudori started serialization in the shounen manga magazine Dengeki Daioh on November 21, 2007 published by ASCII Media Works. A twelve-episode anime adaptation by Production I.G began airing on Fuji TV’s Noitamina programming block on April 11, 2008.
OP
S1. “Atashi no Machi, Ashita no Machi” ~ Hitomi Takahashi
ED
S1. “changes” ~ Base Ball Bear
WEB