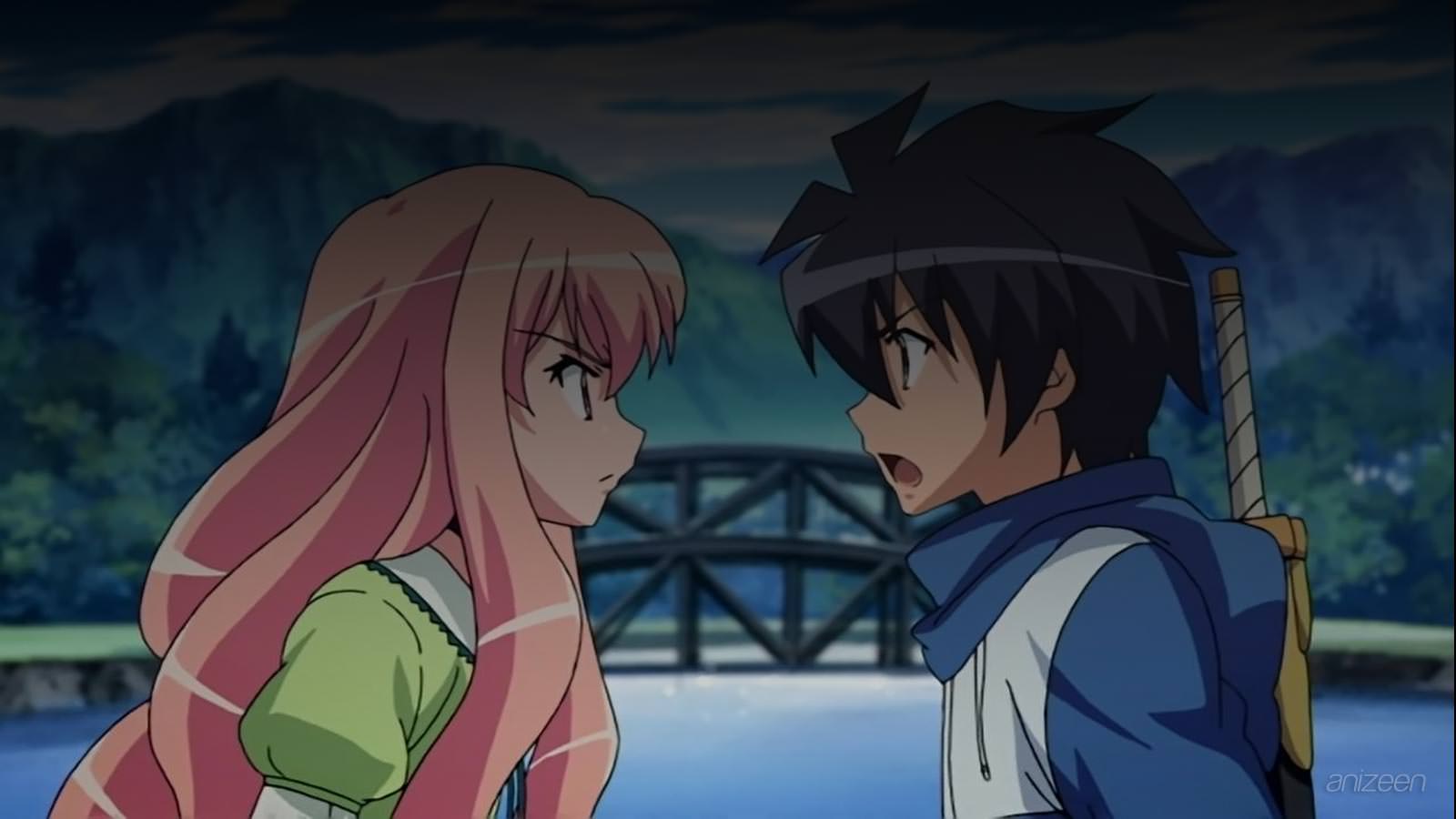 Zero no Tsukaima follows the adventures of the protagonists Louise and her familiar Saito. Louise is a second year student at the Tristain Academy of Magic. In this world, those who can use magic are either magicianss or nobles.

Louise is terrible at magic, and can never use it the way she wants to. She is dubbed the nickname “Louise the Zero” ~ her classmates, due to her success rate of casting spells of being almost always zero. Early in the school year, the second year students summon their familiars; this is considered a special ritual where a mage summons their eternal protector and partner, which usually is some sort of magical creature.

Louise manages to summon a human commoner named Saito Hiraga, leaving her totally humiliated. Due to the sacredness of the ritual, Louise is left with no choice but to reluctantly accept Saito as her familiar. She proceeds to treat Saito as any other familiar only worse, making him sleep on a bed of hay and beats him with a whip for little to no reason, among other things.

One day Saito challenges a noble who disrespects commoners to a duel. Saito is beaten badly at first, but once a sword was put in Saito’s hands, he gained amazing powers and wields the sword with great ability. Louise and Saito’s relationship’s develop during the course of the story. Together they face many mysteries and uncover unexpected truths, including the nature of Saito’s hidden power, and the secrets of the legendary “void” element.

Louise Françoise le Blanc de la Vallière is the main female character. She is a second year student at the Tristain Academy of Magic. Louise is a terrible mage who is often scorned by her fellow classmates because every spell she casts fails, so she is nicknamed “Louise the Zero” after her zero success rate and zero attributes. This has led her to be very bitter and in the way she treats her future familiar Saito to an even cruel extent. The third daughter of the noble family La Vallière who owns the north-eastern territory of Tristain.

Saito Hiraga, the main male character, is from Earth (specifically Tokyo, Japan). At the time of the summoning, he had just picked up his laptop from getting repaired. A portal of some kind opened in front of him, and, Saito’s curiosity getting the better of him, he touched it and was sucked through. At first, Saito had no idea where he was, and was thoroughly disoriented. In the anime, he also could not identify or understand the language the students were speaking, but after Louise attempts to cast a silence spell on him that fails, he can understand and communicate with others as though they were speaking Japanese.
Tabitha is a quiet girl who is a classmate and the best friend of Kirche and she is also Louise’s classmate. Throughout the series she is almost always reading a book. The name Tabitha is an alias; she is in fact Charlotte, daughter of the King’s murdered brother, and the rightful heir to the throne of Gallia. Her specialty is wind magic. She is also a chevalier knight, which is the lowest rank of knight. Her familiar is a wind dragon named Sylphid.

Kirche is Louise’s classmate. Fire magic is her specialty — drawn from her strong passion for love. The territory she is from has long since had a dislike for the La Vallière family. She flirts and has dated (and heavily implied in the anime, slept with) many of the academy boys, but falls in love with Saito after seeing his ability. Often her schemes and aggressive invitations for him to sleep with her leads to him getting punished by his master Louise because of her overwhelming jealousy. Her familiar is a salamander called Flame.

Guiche is Louise’s classmate, despite being in love with Montmorency, is a conceited playboy who cannot decide which girl he really wants. He always carries an artificial rose with him, the stem of which is his wand. He also likes to dote upon his familiar, a giant mole named Verdandi. As his familiar indicates, his specialty is earth magic.

Zero no Tsukaima: Futatsuki no Kishi
(ゼロの使い魔 ～双月の騎士～)
Is the second season for Zero no Tsukaima, a fantasy and comedy-oriented series of Japanese light novels written by Noboru Yamaguchi and illustrated by Eiji Usatsuka. The story features several characters from the second year class of a magic academy in a fictional magical world with the main character being the inept mage Louise and her familiar from Earth, Saito Hiraga. The series has been adapted twice as an anime series. The first season aired in Japan in 2006 produced by the animation studio J.C. Staff, and the second season, entitled began airing in Japan on July 9, 2007.
OP
S1. “I Say Yes” ~ Ichiko
ED
S1. “Suki!? Kirai!? Suki!!!” ~ Rie Kugimiya
WEB