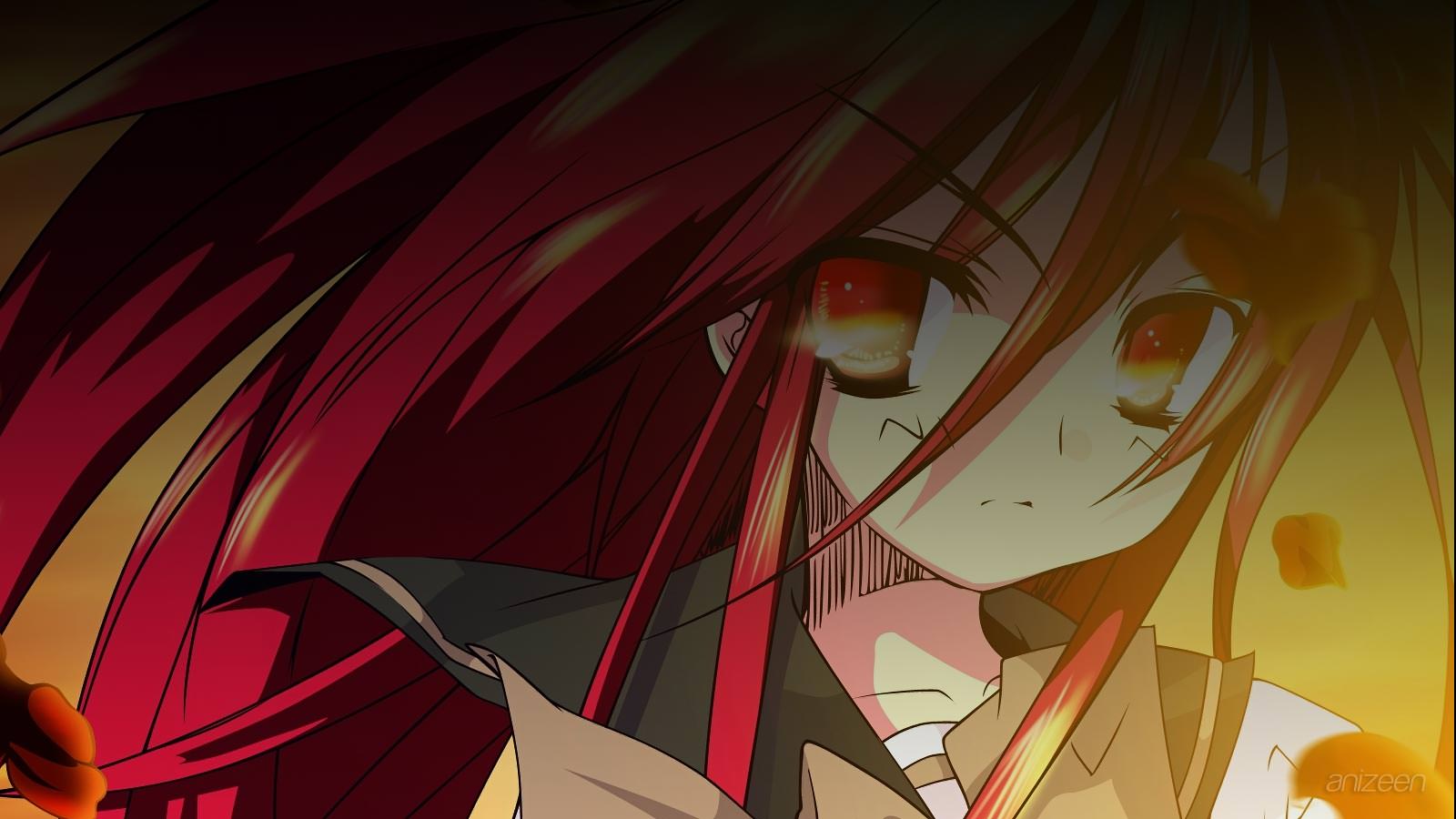 Yuji Sakai, a high school student, expected his very normal life to last forever. However, this expectation is quickly shattered one day while on his way home.

The world suddenly freezes in time, leaving Yuji to watch in horror as blue flames engulf the people around him. Soon a monster resembling a large doll appears and begins sucking the flames into its mouth, until it notices Yuji. Surprised with Yuji’s insusceptibility to the time-stop, it jumps with glee.

Just as the monster prepares to consume Yuji, a sword-wielding girl in black attire with flaming red eyes and hair that burns like embers appears, swiftly and confidently destroys the monster, before noticing Yuji moving freely. The girl calls herself a “Flame Haze” who hunts the “Denizens of the Crimson Realm” and the “Rinne” they send to do their bidding.

Shana’s fight is actually a long-standing struggle between the Lords and Denizens of the Crimson Realm. The Denizens steal Power of Existence, the energy that forms the basis of the world, from living people and utilize it for their own selfish ambitions. Lords are the mortal enemies of Denizens, and utilize Flame Hazes to attempt to retain balance. Thus, the Flame Hazes create Torches in the image of the dead in order to relieve the strain on reality resulting from the actions of the Denizens.

During their time together both Shana and Yuji begin to realize that their affection for each other is more than just friends. During Shana’s numerous battles with the Flame Haze she has come to realize that whenever Yuji is close and cares about her, her powers increase, thus awakening the Flame inside her.

For Shakugan no Shana II, it’s the end of summer, and Yuji and his friends are back in school. However, Yuji gets a feeling about having the same conversation with Ike about cram school and about going to check out some CDs some time before. He then notices that there are sakura petals everywhere, so he confirms with Ike that it’s September, but he doesn’t specifically ask why there are sakura petals floating around at this time of the year and just accepts it. To Yuji, everyone seems normal, including Shana who was escorted to school by Wilhelmina and is happy to see him.

He recalls that she had said something to him shortly after activating her Tenpa Jousai ability in their last major battle on the Seireiden, but he can’t remember exactly what Shana had said. Strangely, their English teacher yells at Shana during class for not having her notebook or textbook, and she goes through the same speech she made back when he yelled at her in the first semester. Yuji notices this, and right as he’s thinking that these things are all the same as before, the world changes into that familiar shade of red.

When giant plant roots sprout out all around the city to announce the arrival of Sorath and Tyrael, Yuji heads out to the bridge to find them taking Shana’s sword. Acting on his hunches, Yuji tries to save Shana, but she doesn’t say anything to him. This confirms Yuji’s suspicions because he doesn’t know what she would say at a time like this. Waking up, Yuji finds himself in the middle of a battle in the real world, with Shana nearby.

Yuji Sakai is the main character of the story, is just an average high school student. However, his world is turned upside down when he discovers that he is already dead and does not have much time before he disappears. Fortunately, Yuji is a Mystes who contains a treasure known as the Reiji Maigo. Unlike normal torches, the treasure inside him restores his Power of Existence every night at midnight. With the Reiji Maigo, Yuji has the possibility to live on like an average human as long as he makes sure that his Power of Existence does not run out before midnight.

Shana is the female lead of the show and a Flame Haze. Initially she is concentrated solely on her duty as a Flame Haze, going as far as to not bearing even a name. She sees Yuji only as a Torch, an object, marginally interesting because of his status as a Mystes. However, she slowly opens up to Yuji, coming to think of him as a person, despite being a Torch, and eventually comes to love him. Until she met Yuji, she was identified by only her Flame Haze title “Slayer with Flaming Hair and Blazing Eyes,” or her sword, Nietono no Shana. Yuji, in his need to humanize her, chose to name her “Shana” after her sword. Shana has a habit of saying “Urusai!” three times in a row whenever Yuji asks her questions or makes remarks that disturb her original worldview. But in reality they really care for each other. She has a great fondness for melon bread.

Alastor is the Lord of the Crimson Realm to whom Shana is bound. He expresses his will through a divine vessel called the Cocytus, which (in Shana’s case) takes the form of a pendant. His name is actually the name of a demon in mythology. Alastor is considered to be the strongest of all Lords or Denizens, even comparable to a god in the Crimson Realm. But even so, he tries to keep the Denizens from consuming Power of Existence.

Margery Daw is a tall, “well-endowed” and mature blond Flame Haze with a drinking habit. She uses the book Grimoire, which is the divine vessel through which Marcosius, to whom she is bound, expresses his will. Her main powers focus around chanting spells and turning into a werewolf. She casts spells by chanting an “Improvisational Poem of Slaughter” (屠殺の即興詩). Her name comes from Mother Goose, as does what she chants. Eita and Keisaku look up to her because she saved their lives once, and act as her subordinates. She holds a vendetta against a Crimson Denizen with a silver flame.

Kazumi Yoshida is Yuji’s classmate. She has a crush on him, but is a bit too shy to tell him directly. When Shana becomes her love-rival, she vows to tell Yuji her feelings and to let him decide between her and Shana. Named after Shigeru Yoshida.

Shakugan no Shana II
(灼眼のシャナII)
Also known as Shana, is a series of Japanese light novels and related media works written by Japanese novelist Yashichiro Takahashi and illustrated by Noizi Ito. Shakugan no Shana began as a light novel series first serialized under the seinen label Dengeki Bunko published by MediaWorks with the first complete novel released on November 10, 2002 in Japan. In time, a manga series was created with art by Ayato Sasakura first serialized in the manga magazine Dengeki Daioh, in February 2005. Both the light novel and manga are currently being released in Japan. So far, there have been seventeen light novels and three manga volumes. An anime version was adapted by the animation studio J.C.Staff and contained twenty-four episodes. A Playstation 2 video game released in March 2006 followed and a second video game for the Nintendo DS was released in March 2007. Additional anime adaptations include a thirty-minute Original Video Animation and a movie that was shown in theaters in April 2007. A second anime series was announced with the title Shakugan no Shana Second, which started airing in Japan on October 5, 2007.
OP
S1. “JOINT” ~ Kawada Mami
ED
S1. “triangle” ~ Kawada Mami
WEB