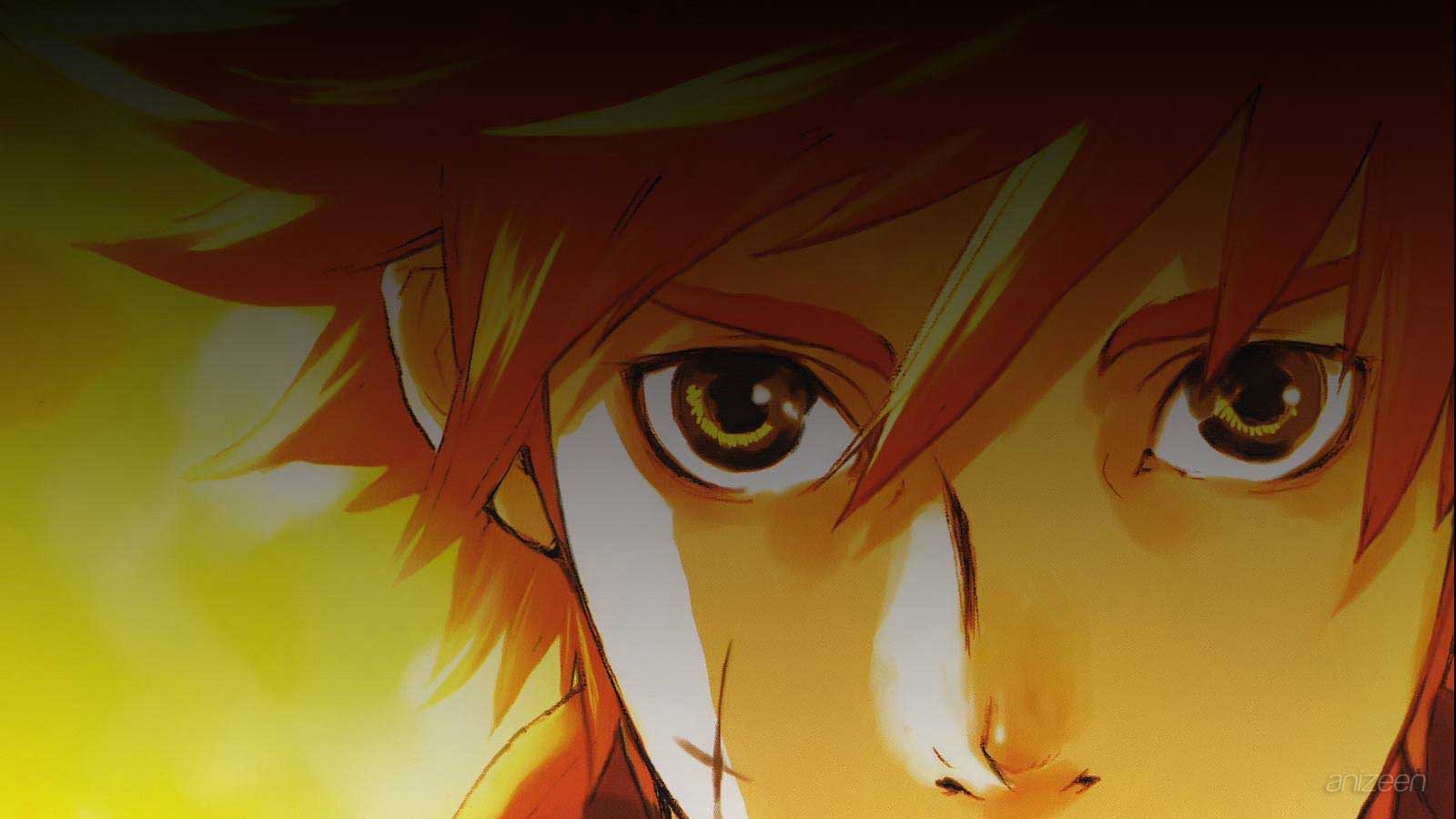 Eleven years before the start of the series, a disaster only referred to as the “Great Catastrophe” destroyed significant parts of the world and killed off many of its inhabitants. Along with that disaster came the appearance of the “Shadow Angels“, a winged humanoid species, which seems to have been in slumber for twelve thousand years. These beings harvest the humans on Earth, which they call the “wingless ones”, like cattle, as to extract their prana (life force) from them, which serves as energy and nutrition to the Shadow Angels.

The Shadow Angels facilitate their harvesting via giant, floating harvesting machines which are guarded by giant golem-like creatures, the “Cherubim Soldiers“. How these are normally piloted is unknown, yet there are times when they are piloted by Shadow Angels.

Ordinary weapons prove ineffective against the giant fighting weapons, but a human expedition under the leadership of Gen Fudou had eventually excavated three very technologically advanced fighter planes. Gen Fudou disappeared, but an organization called Deava took over the research of these machines, which they call Vectors, trying to find out how to use them. The three Vectors are called Vector Luna, Vector Mars and Vector Sol.

They find out that only people who are Element users can control the Vectors and, ultimately, unite the Vectors to form the giant fighting machine Aquarion.

During the first sortie to fight a Cherubim Soldier, they encounter the young boy Apollo, who seems to be the reborn hero Apollonius, also known as the “Solar Wing”, who has betrayed the “Shadow Angels” for his love, Celiane.

Later on, it is revealed that military development, in association with Deava, has created military Vectors; similar in ability to the first three, but with additional conventional weaponry.

Apollo is the main protagonist. Apollo is an orphan that has grown up in a group of homeless children. His name was given to him by his best friend Baron, who acted like an older brother to him for most of his life. Apollo possesses a kind heart and a noble spirit behind his rude, aggressive and bestial behavior. He has very sharp reflexes and senses, similar to an animal. His characteristics cause few to believe the rumor that he is the reincarnation of Apollonius, also called the “Solar Wing”.

Silvia de Alisia is the female protagonist. A noble from the Alisia family and a reincarnation of Apollonius’s human lover Celiane, she possesses great physical strength and a great admiration for her older brother, who she thinks he is the real reincarnation of the “Solar Wing”. She always argues with Apollo, not only because she thinks he is an imposter, but also because of his rude habits and untamed nature. For much of the series she acts like a brat always hanging off her brother. But as the story progresses, she starts to develop strong feelings for Apollo.

Sirius de Alisia is Silvia’s older brother. Obsessed with his own concepts of aesthetics and perfection, he is also a great swordsman. Many people, including Sirius himself, believe that he is the true reincarnation of the “Solar Wing”, and thus Sirius despises Apollo. As it becomes more obvious that Apollo is the true “Solar Wing“, his jealousy consumes his mind, eventually provoking him to take drastic measures.

Hong Lihua, best known as Reika, is a sensitive girl who has the strange ability of causing misfortune to those around her. This causes most people to avoid approaching her, with the exception of Sirius who nurtures strong feelings for her.

Pierre Vieira is a soccer star player, he is by far the most hyperactive of the Element Users, with more than the double of serotonine levels than any of the rest. Always trying to flirt with Deava’s female residents, Pierre hides the pain of a lost love from the past.

Gen Fudou conducted the expedition that retrieved the Vector Machines, and disappeared mysteriously since then. When the elements’ battle against the Shadow Angels started, he returned in order to assume his position as Deava’s supreme commander. Very knowledgeable of the human nature, he uses this wisdom to guide the pilots.

Jean-Jerome Jorge is Deava’s second-in-command. He’s arrogant, pessimistic, quick to judge and somewhat pretentious. Almost the exact opposite of Commander Fudou, Jerome tend to not agree with or understand his actions.

Touma is the main antagonist and Apollonius’s partner. Even 12,000 years later he could never forget his treason, and still has feelings for him. Because of it he is one of the Angels who despise humans at most. He plans to use Aquarion’s power to repair the tree of life, but in order to make it possible, he needs to make Aquarion manifest the true power of the “Solar Wings”, and thus he prepares ordeals and trials to the elements, especially Apollo, in order to make them stronger.

Otoha is Touma’s faithful servant, she loves him jealousy. She hates Apollonius and Celiane, not only because they destroyed Atlantis 12,000 years ago, but also because their love makes Touma suffer so much.

Sousei no Aquarion: Uragiri no Tsubasa
(創星のアクエリオン －裏切りの翼－)
Is an anime TV series written and directed by Shoji Kawamori, produced by Satelight. The science fiction series is an homage to the Super Robot shows of the 1970s and 1980s, executed with modern animation techniques and aesthetics. It is set in the future, where a giant fighting machine called Aquarion is humanity’s only weapon in the fight against a technologically advanced species known as the Shadow Angels. Aquarion aired from April 4, 2005 to September 26, 2005 on TV Tokyo. An alternate retelling of the TV series, the Genesis of Aquarion OVA, is in production. A feature film adaptation premiered on September 15, 2007.
OP
N/A
ED
S1. “Bare Feet” ~ AKINO
WEB