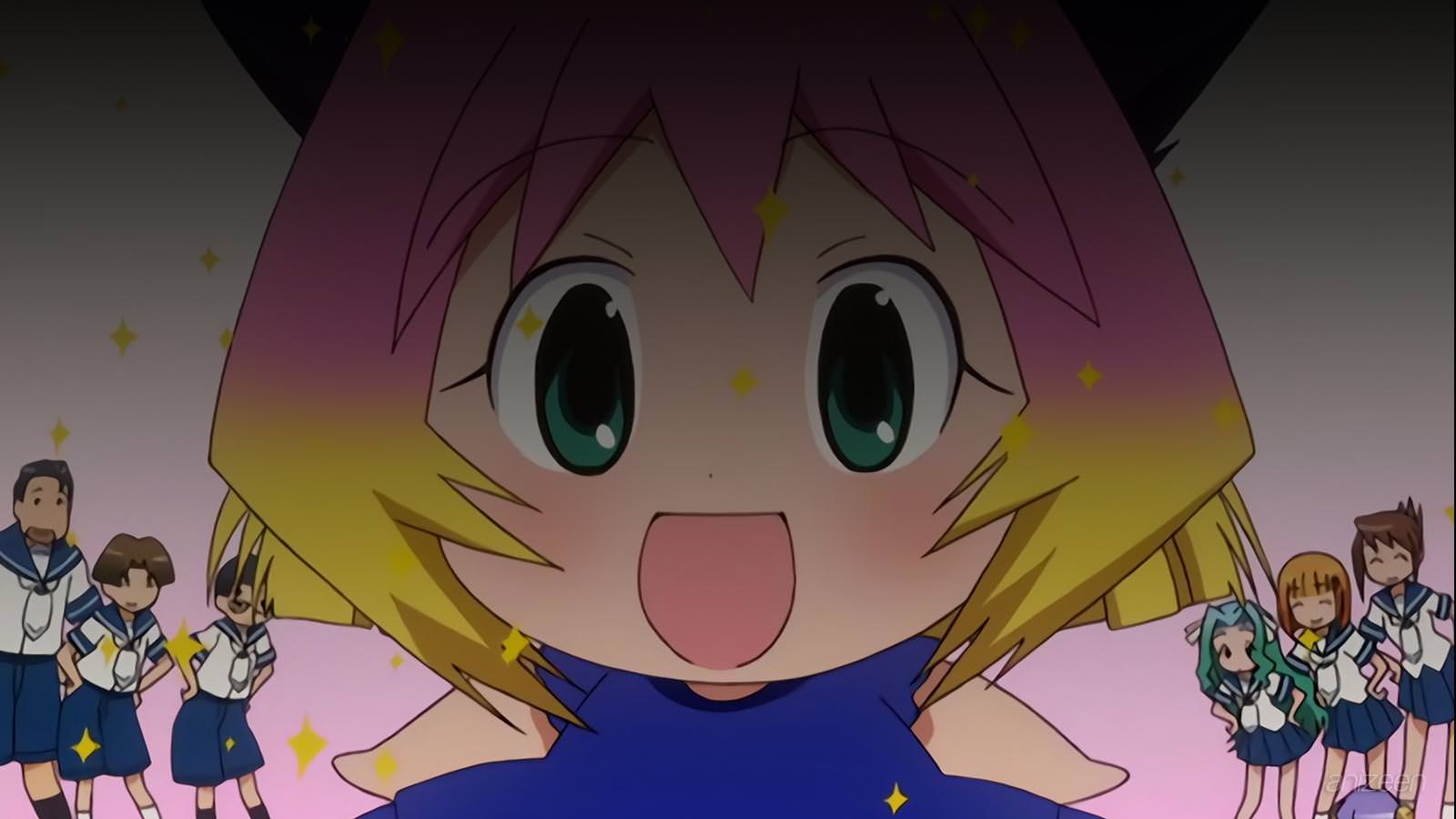 Sunao Moriyama finds a strange but cute creature that he names Potemayo. Potemayo starts following him everywhere, usually riding on top of his head. His discovery becomes the center of attention in his class at school. Soon after, a similar creature appears, and is named Guchuko by one of Sunao’s classmates. However, Guchuko doesn’t seem to be as good-natured as Potemayo.

The story takes place in a school where the boys wear uniforms that are almost interchangeable with the girl’s sailor fuku uniforms. Potemayo is a chibi girl-like “something” wearing neko-mimi, who speaks in nonsense monosyllables and can turn on “cute attacks” on most people. Potemayo has an insatiable appetite and is also dangerously possessive when it comes to Moriyama. This brings Potemayo into conflict with Mikan Natsu who has the hots for Moriyama.

There are two short stories in each weekly episode of Potemayo. In the second episode another chubby-chibi is introduced, Guchuko, who is a shinigami who not only carries a scythe but also has two animate hair clips that shoot out death beams. While Potemayo is busy trying to catch a pudgy little yellow bird that likes to poop on her, Guchuko proceeds to fry most of the class while prowling around on some undefined mission.

Sunao Moriyama is a male junior high school student with a very serious attitude and in effect shows little emotion, if at all. He is the one to originally find and name Potemayo, and it is perhaps due to this that Potemayo takes a liking towards Sunao. He does his best to look after Potemayo and make sure she is safe, which means he has to take her to school with him everyday. Sunao’s mother passed away when he was younger, and since his father is almost never home, Sunao has become very self-sufficent at a young age.

Potemayo is a mysterious creature that appeared one day in Sunao’s refrigerator. The name Potemayo comes from first two characters of potato (ポテト) and mayonnaise (マヨネーズ) — what Sunao was eating at the time. At first, she could not speak anything but the non-sensical phrase “honi”, which she often utters even after learning how to say a few words like Sunao’s name. Potemayo is very protective of Sunao; if anyone tries to get close to him, she will growl and attack the person until they back off. When taken around with Sunao, she rides around on his head. She has the personality of a young child around two or three years of age, but has a super deformed body, complete with cat ears on her head. Potemayo will fly into a jealous rage when Mikan tries to get close to Sunao. Potemayo is also telepathic, at least when others are thinking about her Sunao, and becomes violent when she “hears” Mikan even thinking about Sunao. A small chick named Tori (とり, “bird”) hangs around Potemayo and will often sit on her head.

Guchuko is another mysterious creature that appeared in Sunao’s refrigerator, and is somewhat similar to Potemayo in appearance. Guchuko was named by Kyou Takamimori shortly after she ran into Guchuko at school. Guchuko carries a scythe with a skull on it, and can fire strong energy beams from two living horns (or possibly worms) on either side of her head. She has a very self-sufficient personality, and has only partially warmed up to Kyou, who often gives Guchuko food when at school or at home; Guchuko sleeps in a tree right outside Kyou’s house.

Mikan Natsu is one of Sunao’s classmates, whom which she has a huge crush on; however, due to her soft-spoken personality, she does not find it easy to convey her feelings of love. Mikan will often have outragious fantasies involving her and Sunao in a relationship together, which causes her to space out entirely.

Nene Kasugano is a girl in Sunao’s class, and is a close friend to Mikan. She normally has a high-pitched voice, but has been shown to alter her voice if she is impersonating another person’s voice. She has a straight-forward personality, and is not afraid to say anything that is on her mind. Nene is very rich and has three older brothers who adore her.

Mudou Kirihara is a boy in Sunao’s class. He took an early liking towards Potemayo, though has not been able to even pet Potemayo. On Valentine’s Day in his second year of junior high school, he accidentally gave chocolate to Nene, which later caused him to become her slave for a time. Mudou is in the cheerleading club, and will dress up in a full female cheerlearder uniform during club activities.

Yasumi Natsu is the younger brother of Mikan, though is much taller than her and looks older than most boys his age. Due to his sister’s infatuation with Sunao, Yasumi is annoyed at her sister’s personality when around Sunao and will often break up any chance for Mikan to have some time alone with Sunao. It is also hinted that he has a strong attraction to his sister. His name is a pun on the Japanse word natsuyasumi (夏休み, “summer vacation”).

Tomari Seki is a young girl in fifth grade of elementary school. She first met Potemayo while chasing Guchuko after she stole some chestnuts from her. She later ran into Mikan and her brother Yasumi, whom she takes a liking to after he gives her a hat that Mikan had originally given her brother. Tomari is a tomboyish girl who rarely wears female clothing and has very short hair for a girl, which makes her look like a young boy; it came as quite a shock to Mikan and Yasumi to find out Tomari was a girl.

Potemayo
(ぽてまよ)
Is a Japanese four-panel comic strip by Haruka Ogataya. The manga was first serialized in the Japanese four-panel manga magazine Moeyon on July 9, 2004. In October 2005 the manga moved to the Japanese seinen manga magazine Comic High!. Potemayo anime is a late night adaptation by J.C. Staff that takes “strange” to a new level. Essentially, it is a parody of slice-of-life school anime series. The show is very smooth and doesn’t feel like it’s based on four-paneled comic strips. Potemayo doesn’t seem to have any story, instead it’s all about cute characters doing things in a wacky way. It started airing on July 7, 2007.
OP
1. “Katamichi Catchball” ~ MOSAIC.WAV
ED
1. “Utatane” ~ Chata
WEB

Next
Does anime continue to use limited animation?