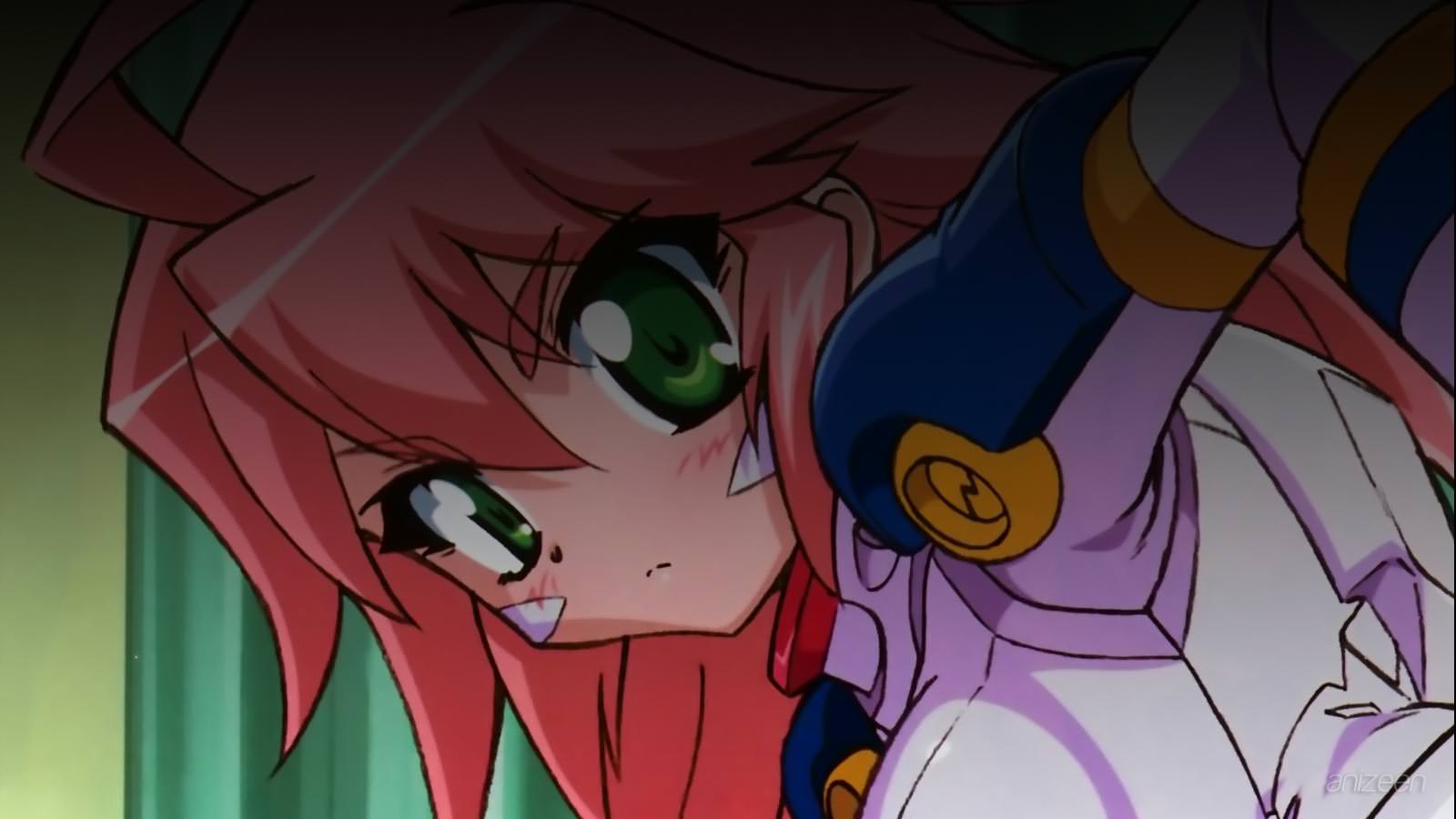 High school student Sanpeita Kobayashi has been dreaming frequently of his first love who 10 years before promised to marry him some day. On a particular morning, his dream is interrupted by the arrival in his bedroom of a number of spider-like combat mechas and a short, bizarre, robot in a wedding dress that starts to battle.

After shooting up the mechas and turning Sanpeita’s room into ruins, the robot calls itself Kemeko and announces to Sanpeita that she is his bride. Sanpeita runs out of the house from this waking nightmare. At school, Sanpeita is being harassed by his friends and also a couple of girls when Kemeko blasts in through the window and announces to the class that they are a couple, wedding cake, massive machine gun, and all.

Sanpeita escapes to the rooftop of the school, where he is harassed by busty Izumi Makimura who wants Sanpeita for herself. But they are interrupted by the arrival of another trashcan-shaped mecha that contains a giant fighting hand that is there to destroy Sanpeita.

Kemeko flies in to fight and destroy the mecha, and after doing so she finally opens up to reveal that inside the short, stout suit is a tall, beautiful girl who Sanpeita recognizes as his first love, now all grown up. But M.M., the girl inside of Kemeko, isn’t used to being outside of her robot suit, and even has a slightly different personality from Kemeko. But in either guise, she is very deadly to everyone around.

At the end of the day, after Kemeko has flown off somewhere, Sanpeita finally gets to go home and relax. But awaiting him in his room is Kemeko, now dressed in a Kimono, with a rice cooker and a bowl of rice waiting for Sanpeita, who she addresses “anata”.

Sanpeita Kobayashi is a high schooler who still harbor feelings for a girl he met 10 years ago. His life is turned upside down when he is approached by Kemeko’s pilot who claims to be his fiancée and moves to his house, and he starts to be constantly targeted by unknown assailants. His personality is kind but because of any number of misunderstandings that are out of his control he is constantly physically assaulted by both friends and enemies alike.

Kemeko is a powerful combat robot despite its chubby figure piloted by M.M. As M.M. rarely gets outside her robot, everyone around Sanpeita thinks that Kemeko is her true form. Her default paint scheme is a reference to the plugsuit used by Asuka Langley Soryu in Neon Genesis Evangelion.

M.M., or Mei Mishima, is Kemeko’s pilot who happens to be a tall and attractive girl who somehow manages to fit in Kemeko’s smaller body. Despite her claims to have never met Sanpeita before moving to his house, she seems to be somehow familiar to him. She also wears the same bandages on her cheek just like the girl from ten years ago.

Izumi Makihara is Sanpeita’s well endowed childhood friend and classmate who harbors a crush on him. She happens to be attractive and tries to show her feelings, but Sanpeita is apparently oblivious. When ever something perverted happens to her she yells out “Unhealthy” then decks whoever caused the action, Sanpeita is almost always on the receiving end of her rage.

Tamako Kobayashi is Sanpeita’s little sister responsible for the house chores. She is revolted at first after finding that her brother got himself a “girlfriend”, but later she befriends Kemeko and welcomes her into the house.

Fumiko Kobayashi is Sanpeita and Tamako’s mother who works as a manga artist. Just like Tamako, she easily accepted Kemeko into the household despite Sanpeita’s protests.

Ryouko Kurosaki is a strange girl who is after the power hidden in Sanpeita. She carries a sword around and is not hesitant about using it. She is employed at Mishima, Ryoko is often seen with her black cat – Jyuumonji. Thanks to: D. Baranyi