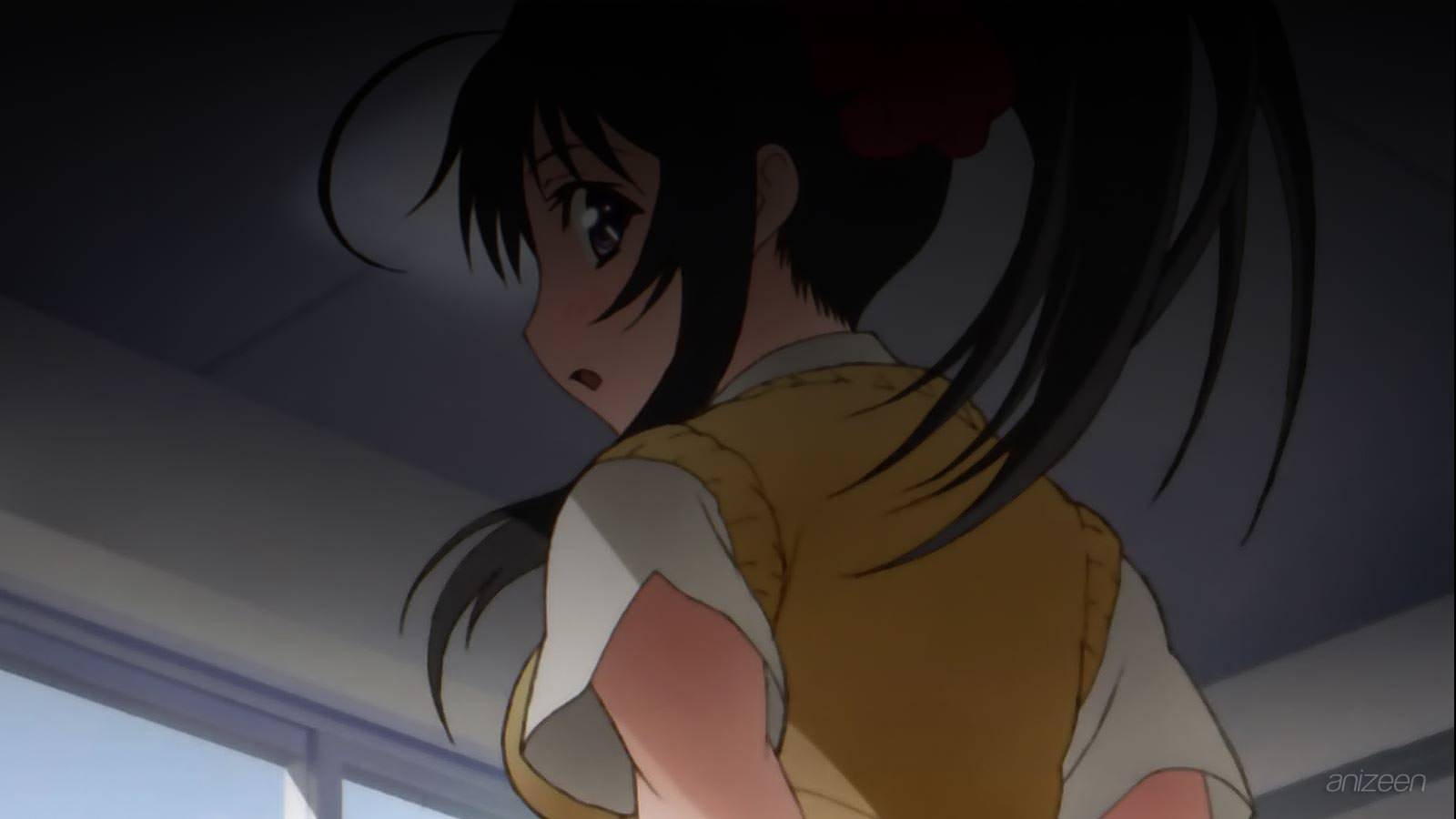 Kanokon’s story revolves around Kouta Oyamada, a young first-year high school student who moves from the country to the city and thus transfers to Kunpou High School. Everyday, Kouta is greeted very intimately on the way to school by the beautiful second year student Chizuru Minamoto, who enjoys pulling Kouta’s head into her ample cleavage.

This public intimacy outrages the class president Akane Asahina, who likes Kouta but feels that she can’t compete with Chizuru, and also Chizuru’s younger brother Tayura, who likes Akane but can’t get anywhere with her. Kouta’s classmates always wonder why such a beautiful and sexy older girl likes Kouta. Kouta just murmurs to himself that Chizuru “likes his smell“. But things are much more complicated than many of Kouta’s classmates think, because Chizuru is not human but is actually a kitsune, as is her brother Tayura, who is in the same class as Kouta.

On Kouta’s first day at school Chizuru became infatuated with him and gave him a love letter that invited Kouta up to the music room after school. There Chizuru gave Kouta a wet, passionate kiss that had an unexpected side effect – Chizuru changed into her kitsune form right afterwards.

Tayura realizes that Chizuru is up to something and goes into the music room just as Chizuru is busy pulling off Kouta’s pants. Tayura is mad at Chizuru for letting Kouta know that she isn’t human, but Chizuru doesn’t care and kisses Kouta again, at which point she merges into Kouta’s body.

Suddenly, Kouta gets a long furry tail and kitsune ears. Tayura decides that he must stop his big sister and attempts to throw a blast of power at her, but Chizuru, thanks to her new merged form within Kouta, easily forms a gigantic power ball that blows Tayura out of the building.

Kouta Oyamada is the protagonist of the story. He moves from the country to the city in his first year of high school, and on his first day of school, he discovers that the second year girl Chizuru Minamoto is actually a kitsune. He used to live with his grandfather before moving. Kouta generally has a moderate personality and is indecisive. Apparently, his parents are dead and he lives with his grandparents. He loves Chizuru, but does like Nozomu too. When he was younger, he almost drowned in a river and now has a fear of swimming.

Chizuru Minamoto is a second year female student at Kouta’s school. She appears to be a normal, albeit big-breasted girl, but is in fact a 400-year-old powerful kitsune (when she reveals herself, her hair goes from black to blond). She is constantly hanging around and on Kouta, though he is the only male she acts genuinely towards. She loves Kouta very much and wants to enter a “relationship of sin” with Kouta.

Nozomu Ezomori is a first year female student at Kouta’s school. She has short silver hair, and is in fact a wolf deity. She has an older brother named Saku. She is in love with Kouta, and is a rival of Chizuru with Kouta’s affections. While she cannot compete with her in terms of breast size, Nozomu does take reference of her brother’s pornographic magazines which feature such things as sadomasochism, and cosplay among other things. She lives by herself in an expensive penthouse apartment. She is a serious glutton when it comes to food.

Tayura Minamoto is the younger brother of Chizuru, and is Kouta’s classmate. When they first meet, Tayura is jealous of the relationship between his sister and Kouta. Chizuru says that he is suffering from a sister complex. Tayura looks much older than many boys his age. He enjoys teasing his older sister and Kouta by calling them “love birds”. Like his sister, he too is a fox deity. He is generally has a calm and cool personality. Whenever he tries to get closer to Akane, he is given the cold shoulder, though he himself has stated that it is okay with her being cold. Incidentally, he has a small interest in masochism.

Akane Asahina is the class representative of Kouta’s class, and wears glasses. Due to this, she has a high sense of regulations, and therefore disagrees with Kouta’s and Chizuru’s close high school relationship. She is on good terms with Kouta, and worries about his relationship with Chizuru. She warns Kouta to watch out for Chizuru, though she might be jealous of Chizuru’s body.

Rin Nanao and Ai Nanao are twin first-year sisters at Kouta’s school. Originally, they were given the task to assassinate Chizuru, but did not go through with it since she was still “only a kid”. They are nearly identical except for their slightly different hair styles. They use chains when attacking.

Omi Kiriyama is a second year student at Kouta’s school who is in fact a wind spirit with the power to control the wind. Omi was once the bitter enemy of the Minamoto siblings. In the fourth volume of the novels, he succeeds as the gang leader of the delinquents at his school. He hates the friendship between Kouta and his friends, and does not speak much.

Mio Osakabe is a second year student who hangs around with Omi. Due to his short stature, he is often mistaken for a grade school student and has even received multiple confessions from grade school girls. He is in fact half frog spirit and can heal quickly. While he did not have a name originally, Omi named him from a combination of his own given name and the Omi’s home town’s name. He is on good terms with Omi.

Ryuusei Kumada is a third year student who has a distinct cross-wound over his left eye and was a gang leader of the delinquents at school before Omi took over in his place. He is in fact a bear spirit. In the fourth volume, he graduated from high school, but soon changes his name to Suisei Kumada restarts high school as a first year student.

Iku Sahara is a social studies teacher and is Kouta’s homeroom teacher. She is prone to making silly mistakes and is very childish. She is in fact possessed by a youkai and thus has dissociative identity disorder as an effect. She has to conceal her true identity to Chizuru, and investigates the spirits and deities at school.

Kanokon
(かのこん)
Is a Japanese light novel series by Katsumi Nishino, with illustrations by Koin. The first novel was released on October 31, 2005, and as of February 25, 2008, nine volumes have been published by Media Factory under their MF Bunko J label. A manga adaptation by Rin Yamaki started serialization in the seinen manga magazine Monthly Comic Alive on June 27, 2006, also published by Media Factory. A drama CD was produced by Media Factory that was released on March 28, 2007. An anime adaptation produced by the animation studio Xebec first aired in Japan on April 5, 2008 on the AT-X television network. The story follows that of Kouta Oyamada and the fox and wolf girls that surround him.
OP
S1. “Phosphor” ~ Ui Miyazaki
ED
S1. “Koi no Honou” ~ Yui Sakakibara
WEB