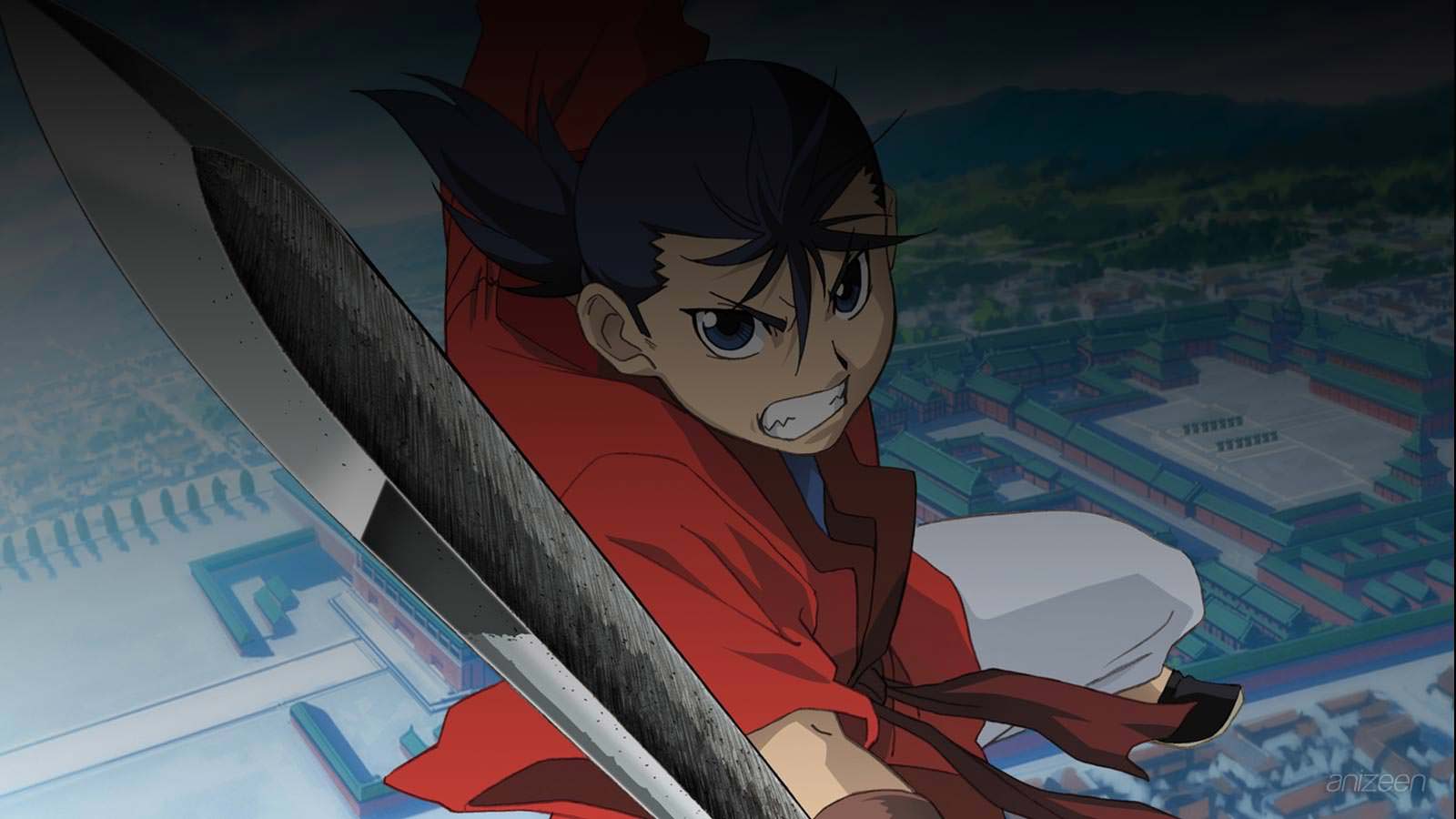 In a generic ancient China, Keirou, an evil general attacks a city on his own and wipes out the guards of Lotus Temple so that he can steal an ancient sword of power. The only person around to try to stop him is young Taitou, who is a highly skilled martial arts fighter, but even so Taitou is no match for Keirou’s power.

Taitou is the incarnation of a mysterious star that grants him a huge amount of power that he has yet to fully master. Joining them is Ryuukou, who has power similar to Taitou, just more honed. After Taitou’s coming of age ceremony, which required him being beaten by Ryuukou, he is given the Kenkaranpu, described as a conqueror’s sword, which Taitou is not even capable of drawing.

However, Taitou grabs the magic sword and, during his own power-up, is able to unsheathe the sword, demonstrating that he is the Chosen One. Keirou is ticked-off at this, and since he is an experienced Villain and Taitou is an inexperienced Hero, Keirou is able to trash Taitou and steal the sword.

Keirou and Taitou are only two of the seven super fighters who each have a sign of one of the stars of the Big Dipper located somewhere on their bodies. Taitou survives his battle with his powers intact and his temper on full power-up.

Taitou Shirei is a 16 year old youth. He is very head strong, does not like losing, and though reckless is quite a skilled fighter. He opposes the officials in order to protect the people and his companions. He also has a habit of repeating himself when flustered or angry. He has the Hokushin-Tenkun mark of Hagun on his right shoulder. He is also part of the law enforcing organization, Seiryutou, which is based at Lotus Temple at Taishan.

Keirou is 35 years old. He has the Hokushin-Tenkun mark of Tonrou on his left shoulder. A general of the imperial army and the leader of the Black Wolf Party. He aims to be the emperor of the Ken Empire and to this end forced his way into Lotus Temple with his troops to retrieve the sacred sword Kenkaranpu. It is said that the one who unsheathe it will get the right to rule as Emperor. To get the sword many monks and Seiryutou members were killed.

Ryuukou Mouten is the 18 year old bearer of the Bukyoku mark. Uses a staff in battle, he is the adopted son of a master from another temple of the Rikka Sect. A serious person who expects highly from himself. He has a bad sense of direction. The Bukyoku mark is at his right pec.

Hyousei Meitoku is the 17 year old bearer of the Rokuson mark. The archer of the group. Thought to be a carefree person but he is also a hot-blooded person. The Rokuson mark is at the back of his right hand.

Koyou Mougai is the 22 year old bearer of the Monkoku mark. The leader of a group of sea bandits. Although a big, lively and rough person, he has skillful fingers and has interest in cooking and make-up. He welds the eight-section staff. The Monkoku mark is at his neck.

Shoukaku Chouyou is the 24 year old bearer of the Renjou mark. He is the teacher of the current emperor Taigatei. Usually seen smiling and basically a calm person, under that exterior he is actually a tatician that resorts to any means to keep the Ken Empire going. Any unknown action he takes is usually for the good of the Ken Empire. The Renjou mark is at his right palm.

Rinmei Shokan is the 20 year old bearer of the Komon mark. In love with Ryuukou but she hates his unsociable atitude. She cooks for the temple Ryuukou is from. She is concerned that she looks older than her age. She is the type that becomes scary when angry. The Komon mark is at her right thigh.

Laila Seiren is 14 years old. Taitou’s step sister. She is the daughter of Souei, the leader of Seiryutou. She is often seen quarreling with Taitou and has not lost in them. But actually she cares a lot for her ‘brother’. The only person who can stop Taitou when he acts recklessly.

Taigatei is a 16 years old, the young Emperor of the Ken Empire. Fainthearted and has no self thought. He resembles Taitou.

Juushin Enbu -HERO TALES-
(獣神演武)
Is a manga serialized in Gangan Powered. The original story is by Huang Jin Zhou (A unit comprised of Hiromu Arakawa, Genco and Studio Flag) and illustrated by Hiromu Arakawa, author of the manga Fullmetal Alchemist. The motif of the story are chinese wuxia drama and novels. The world view is rooted in Chinese folklore and history, as well as having an element of fantasy. On October 7, 2007, an anime series based on the manga premiered in Japan titled “Juushin Enbu -HERO TALES-.
OP
1. “WINTERLONG” ~ BEAT CRUSADERS
ED
1. “Kakegae no nai Hito e” ~ Mai Hoshimura; #2 Komorebi no Uta” ~ HIGH and MIGHTY COLOR
WEB