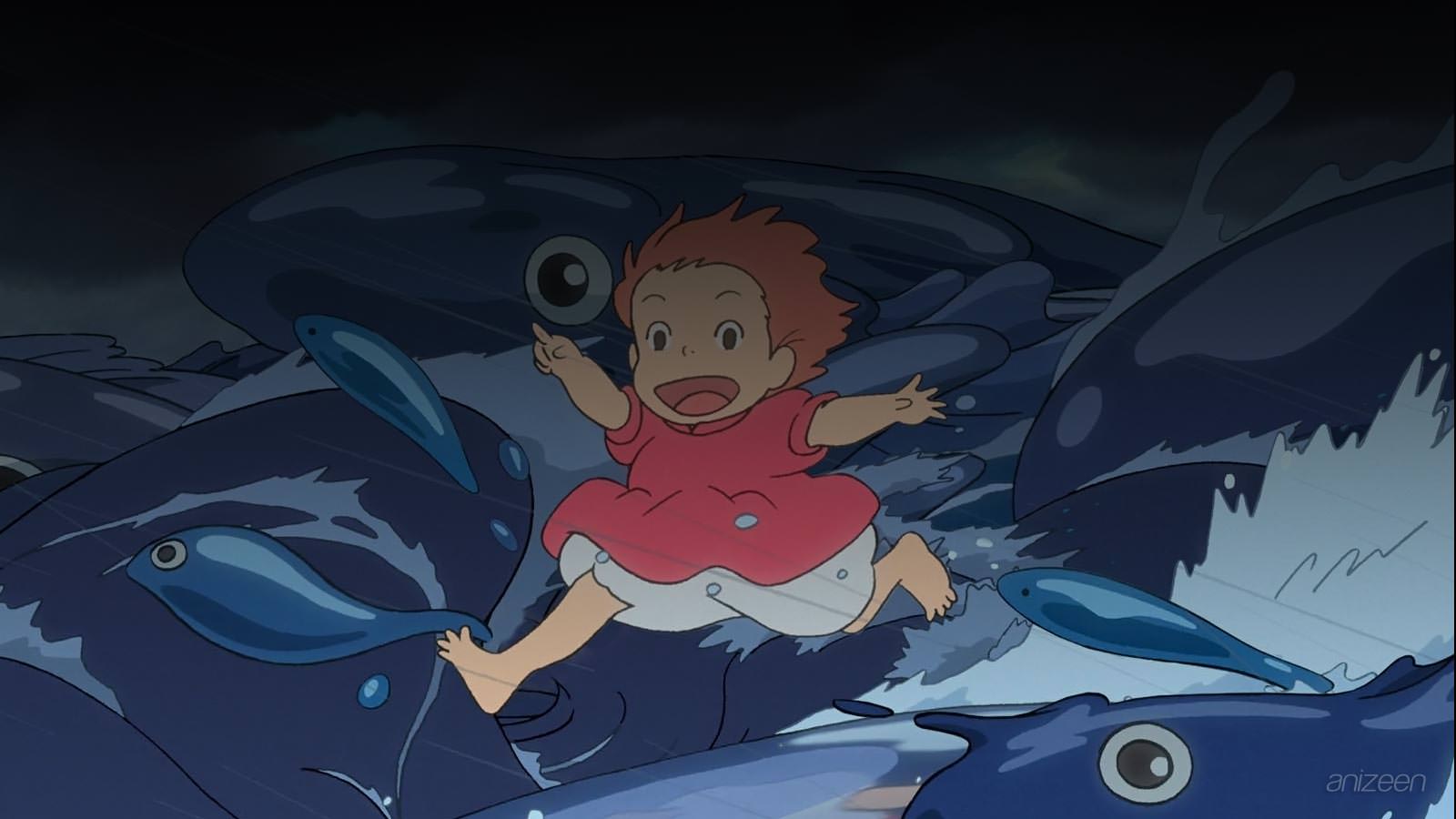 The plot is centered on a female fish who runs away from her home in the sea. She ends up stranded on the shore and is rescued by Sousuke, a five year old boy who lives on a cliff. Sousuke names her Ponyo after taking a great liking to her, and promises to protect her forever.

Meanwhile, her father, Fujimoto, is looking for his daughter, upset that she ran away. He calls his wave demons and has them take Ponyo back to him, since it seems he has an aversion to land. Sousuke is heartbroken by this, and goes home crying to his mother, Risa. Risa tries to cheer him up, but to no avail.

Ponyo and her father have a confrontation, where Ponyo refuses to let her father call her Brünnhilde and declares she is Ponyo, and voices her desire to become human, because she has started to fall in love with Sousuke. Her father silences her with difficulty and goes to summon Ponyo’s mother. Meanwhile, Ponyo, with the help of her sisters, breaks away from her father, and uses his magic to make herself human.

This causes an inbalance in the world, which in turn results in a storm. Riding on the waves of the storm, Ponyo goes back to visit Sousuke. Risa, Sousuke, and Ponyo stay the night at Sousuke’s house, hoping the storm will be over, whereupon Risa leaves the house to check up on the residents of the nursing home she works at.

Granmammare, Ponyo’s mother, arrives at Fujimoto’s submarine. Fujimoto notices the moon has come out of its orbit and the satellites are falling like shooting stars. Granmammare declares that if Sousuke and Ponyo pass a test, Ponyo can live as a human and the world order will be restored.

Sousuke and Ponyo wake up to find that most of the land has been submerged. Risa has not come home yet, so with the help of Ponyo’s magic, they make Sousuke’s toy boat life-size and set out to find Risa. While traveling they name ancient extinct fish swimming about.

After landing and finding Risa’s empty car, Ponyo and Sousuke go through a tunnel. There Ponyo loses her human form and resumes the form of a fish. Sousuke and Ponyo are captured by Fujimoto and they safely arrive at the nursing home and meet Granmammare. Granmammare asks Sousuke if he can love Ponyo even if she is a fish or mermaid. Sousuke replies that he likes Ponyo in all forms. Granmammare then allows Ponyo to become human once Ponyo kisses Sousuke.

Gake no Ue no Ponyo or Ponyo on the Cliff by the Sea
(崖の上のポニョ)
Is a 2008 animated film by the Japanese anime studio Studio Ghibli, written and directed by famed anime filmmaker Hayao Miyazaki. It is Miyazaki’s ninth film for Ghibli. The plot centers on a goldfish named Ponyo who desperately wants to be a human. In pursuing her goal, she befriends a five-year-old human boy, Sousuke. The film was released by Toho on July 19, 2008 in theatres across Japan on 481 screens. Ponyo’s theme song was released on December 5, 2007, performed by Fujioka Fujimaki (famous duo Takaaki Fujioka and Naoya Fujimaki) and eight year old Nozomi Ohashi.
OP
S1. N\A
ED
S1. “Gake no Ue no Ponyo” ~ Fujioka Fujimaki and Nozomi Ouhashi
WEB

Gake no Ue no Ponyo Trailer 1

Gake no Ue no Ponyo Song