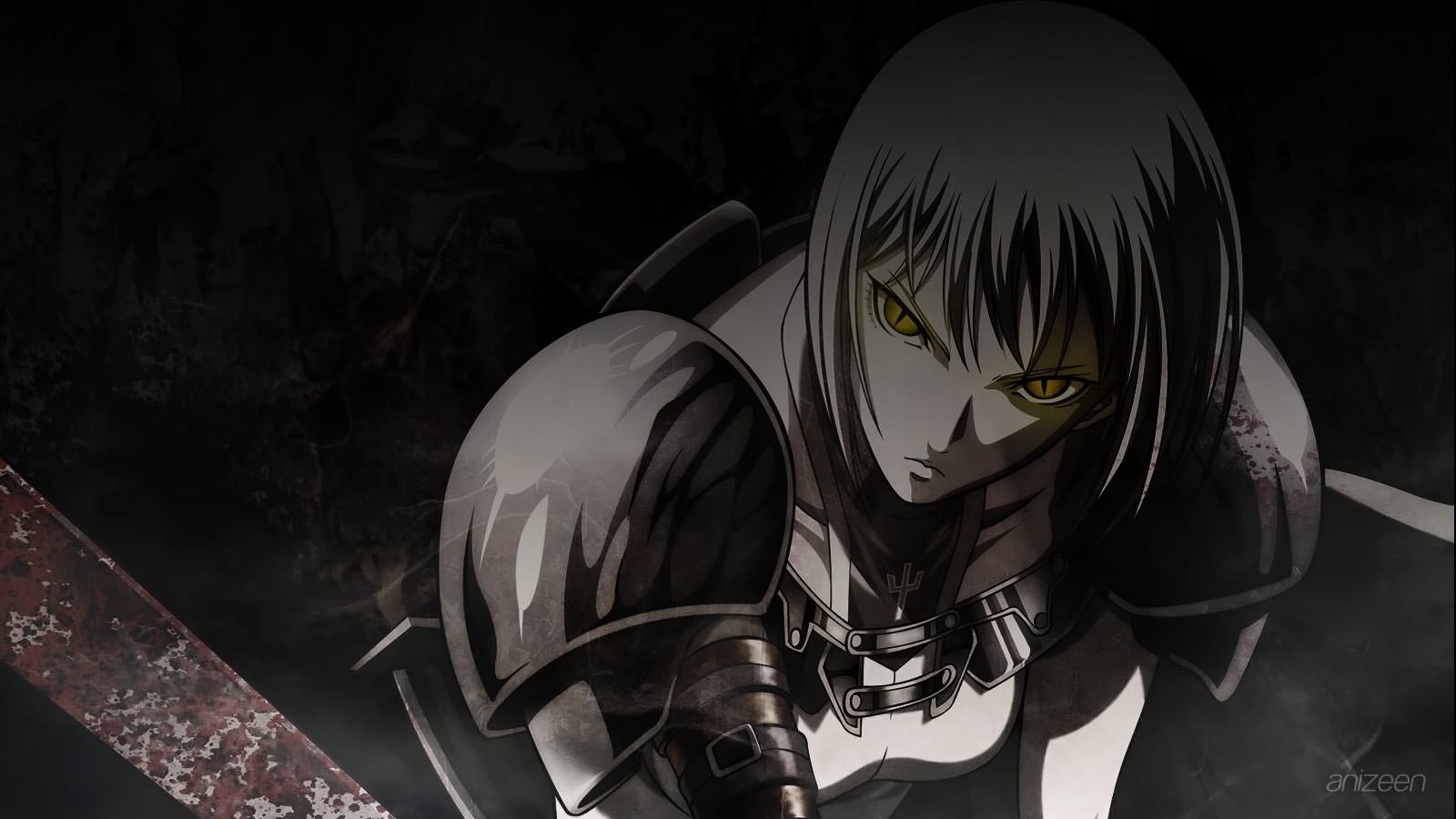 The setting of Claymore’s story is a fictional world with medieval technology. Politically, it appears to consist of a large number of scattered, apparantly independant, towns. In this world, humans coexist with monsters called Yoma. The Yoma, who are shape-changers, can take human form and live in disguise among human society. They feed on human innards, and sometimes take possession of memories from the brains of people they eat. These acquired memories help them to disguise themselves within human society, often by disguising themselves as their victim.

A nameless and highly secretive organization has created an order of superhuman warriors to protect humans from the Yoma. These warriors are called Claymores by the village people, after their immense claymore swords. Villages being attacked by Yomas hire Claymores to kill the Yomas for a large fee.

This organization creates the Claymores by implanting Yoma flesh and blood into humans, to create hybrids that are more powerful than the original Yoma, in addition to their weapons training and possibly greater intelligence. A Claymore’s standard abilities include faster healing, limited shape modification, the ability to detect other demons and hybrids, and overall enhanced physical prowess. They all wear the same armor and use large claymore swords that normal humans lack the strength to wield, and are characterized by their silver eyes and hair.

However, the Yoma powers of each Claymore will increase over time until the Claymore loses all humanity and becomes a powerful, highly intelligent, and incredibly bloodthirsty Yoma called an Awakened. They also constantly run the risk of speeding up their transformations into Yomas if they overuse their powers. A good Claymore will ask a friend (usually a fellow Claymore) to kill them if they sense they are “Awakening” so they would not become a Yoma.

The secret organization is contacted by the town council about Yoma killings and will then send a Claymore to kill the demons, although not every hybrid does so willingly. Upon a successful kill, it then sends an agent to charge a large fee for its services. A town that fails to pay will never receive further assistance and will be left at the mercy of the Yoma. It has been insinuated that the organization themselves send Yoma to the towns that could not pay.

The organization is often strict and harsh; hybrids who break the rules (for example, by killing a human, even accidentally or to protect others) will be hunted down by their fellow hybrids. Claymores who causes trouble or Claymores suspected to be on the verge of Awakening will be sent on suicide missions without their knowledge or consent. Various characters throughout the series suspect the organization of being much more sinister than it appears.

Despite saving humans on a regular basis, Claymores are often alienated from and feared by humans due to their incredible powers, their relation to Yomas, and generally aloof attitudes. Humans will often call them “silver-eyed witches” or “monsters”. Surviving family members of a Yoma’s maskerade are often banished from villages for fear that they might be Yoma too. Females who suffer this fate are often forced to become Claymores to survive.

Claymores often live unhappy, lonely lives due to their solitary lifestyle and the knowledge that they will eventually die or become monsters. Presumably from the combination of their Yoma blood, their training, and their harsh lives, many Claymores are generally serious and at least outwardly cold. Others become hot-tempered and easily angered, while some other Claymores develop an incredible thirst for blood and become bloodthirsty killers who enjoy taking life, more savage than the Yoma they hunt. Almost all of them avoid any sort of companionship with humans.

Claymore
(クレイモア)
Ananime adaptation of the manga began airing on NTV on April 3, 2007. [-]It is a planned 50 episodes.[/-] A twenty-six episode anime adaptation of Claymore was produced by Nippon Television. Directed by Hiroyuki Tanaka and Madhouse Studios, the series premiered on the Nippon Television channel on April 3, 2007 and ran until September 25, 2007. Although it follows the manga’s main plot, it diverges at certain points and, thus far, shortens fights. The anime character designs were created by Takahiro Umehara. The anime series follows the plot until episode twenty before diverging into its own storyline.
OP
S1. “Raison D’être” ~ Nightmare
ED
S1. “Danzai no Hana~Guilty Sky” ~ Riyu Kosaka
WEB