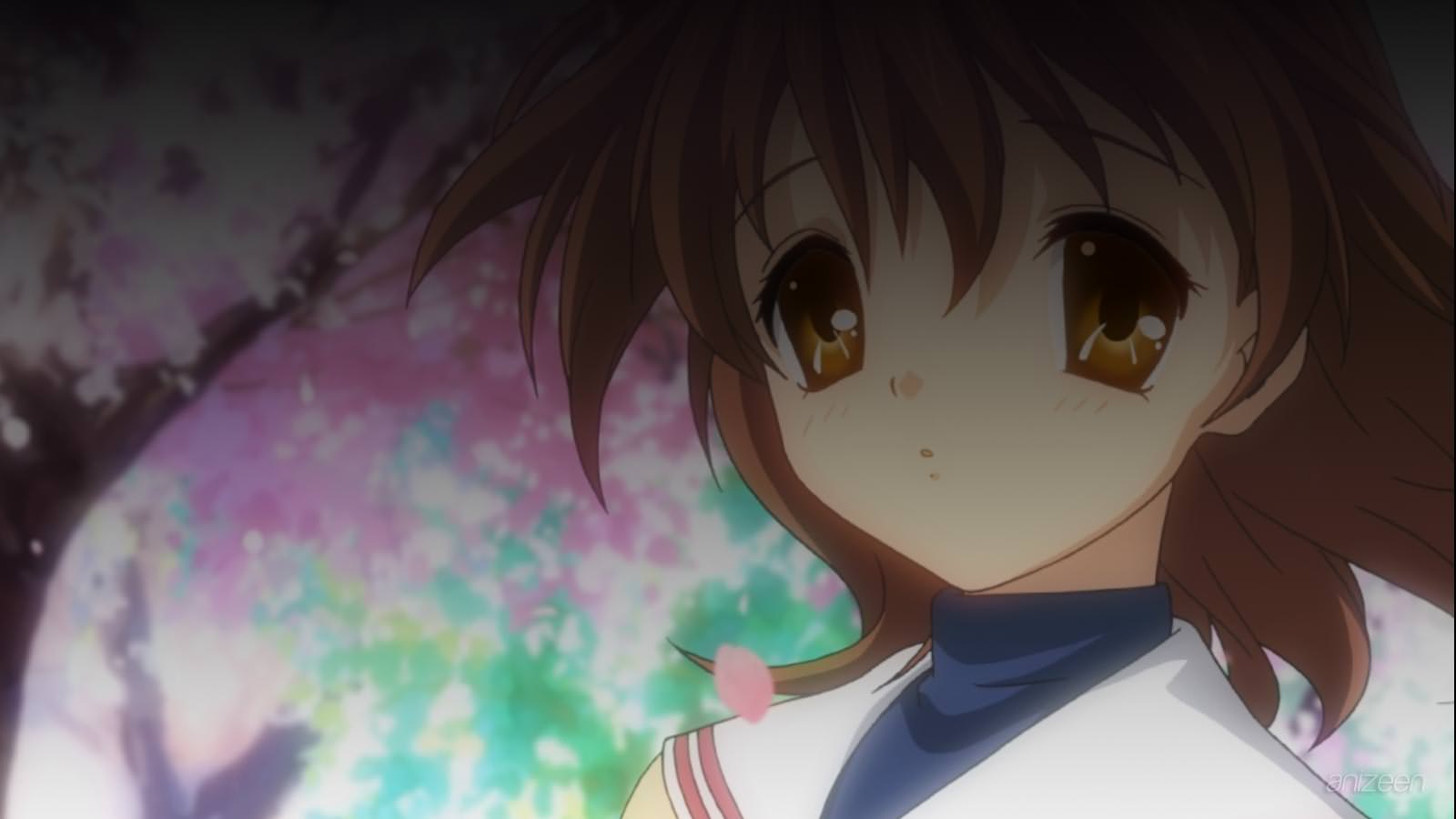 The Clannad visual novel is divided into two segments, or story arcs “School Life and After Story” which serve as different phases in the overall story.

Tomoya Okazaki is a very unhappy third year high school student, whose unhappiness is bordering on clinical depression. He misses his late mother, he hates his alcoholic gambling-addicted father, and he fantasizes about being alone in the world except for a single mysterious girl.

One day on the way to school Okazaki runs into the girl of his fantasies, Nagisa Furukawa, who missed a year of school due to a lengthy illness and is now feeling alone herself because all of her former friends graduated and she was held back.

Okazaki starts to make friends with Nagisa and to help her reestablish her bearings at school, much to Nagisa’s surprise. Okazaki becomes fascinated with Nagisa and eventually wanders over to the bakery of her family, where he meets her eccentric but nice parents and ends up having dinner with all of them. The contrast of Nagisa’s odd but genuine family with Okazaki’s lack of family brings both hope and despair to Okazaki.

Tomoya Okazaki is the male protagonist of Clannad. Due to his habit of always arriving late to school, skipping classes during the day, and staying out all night, he has been labeled as a delinquent, or a young person who defies authority. Ever since his mother, Atsuko, died in a car accident when he was young, Tomoya has been living with his father, Naoyuki, with whom he argues constantly. Tomoya was injured during a fight with his father three years ago; since then, their relationship has been very distant. While walking to school, Tomoya met Nagisa Furukawa, since then, his life changed. Nagisa describes him as someone who is mean and bad-mouthed, but actually kind-hearted.

Nagisa Furukawa is the main heroine of Clannad. Although she is in her third year in high school, as is Tomoya, Nagisa is actually one year older since she had to repeat her third year after an illness that lasted nine months. On the first day of school, She meets Tomoya on a long hill path in front of the school. She has a strange habit of muttering the names of food that she plans to eat as a way to motivate herself, such as anpan. She wants to reestablish the once-disbanded drama club. She does not have much self-confidence so she often needs help in order to motivate herself through the day.

Kyou Fujibayashi is a bad-mouthed and aggressive girl who is also well known as a good cook. She is the older of the Fujibayashi twins. She was in Tomoya’s class in their second year, and has maintained a steady friendship with Tomoya even though they are put in different classes on their third year. She is currently the class representative of her class. She has a pet baby boar named Button.

Kotomi Ichinose is another schoolmate of Tomoya’s in the same year, but, like Kyou, is in a separate class from Tomoya. She is in the top ten for every subject throughout the whole country in standardized exam results—she always goes to library to read extra materials, especially books in foreign languages. Kotomi is a very quiet girl and it is quite difficult to communicate with her. In her spare time, she plays the violin, although she is very poor at it to the point of causing pain to those who hear her play.

Tomoyo Sakagami transferred to Tomoya’s school as a second year student during spring. Although Tomoya is older than her, Tomoyo does not show him his due respect as a senior student. She has a younger brother named Takafumi. She is rumored to be violent and to have a misconduct record for fighting. These rumors are later confirmed, first when she beats up several students from her previous school one day at her new school during school hours. Unable to believe it, Youhei checks on her along with Tomoya, who tag along with him to kill time.

Fuko Ibuki is a first year student at Tomoya’s school. She is always alone, making wood carvings of starfish with a small knife to give to others as presents. This hobby completely drains her concentration and awareness of her surroundings. Fuko’s story has several connections with Nagisa’s story. In the beginning, Tomoya finds Fuko in an empty classroom, carving a block of wood with a knife. Tomoya confiscates the knife after noticing she is hurting herself, but eventually returns the knife the next day, after Fuko nudged him.

Clannad
(クラナド)
Is a Japanese visual novel created by the software company Key, who also produced the successful titles Kanon and Air. Key announced in 2001 a release date of 2002 for Clannad and, after several postponements, finally released a limited version for the PC on April 28, 2004, and the regular version less than four months later on August 8, 2004. The visual novel was later ported to the PlayStation 2, PlayStation Portable, and Xbox 360. Clannad has made several transitions to other media with four manga series. The anime series produced by Key started airing on October 5, 2007.
OP
S1. “Mag Mell ~cuckool mix 2007~” ~ eufonius
ED
S1. “Dango Daikazoku” ~ Chata; “Ana” ~ Lia -ep 24-
WEB