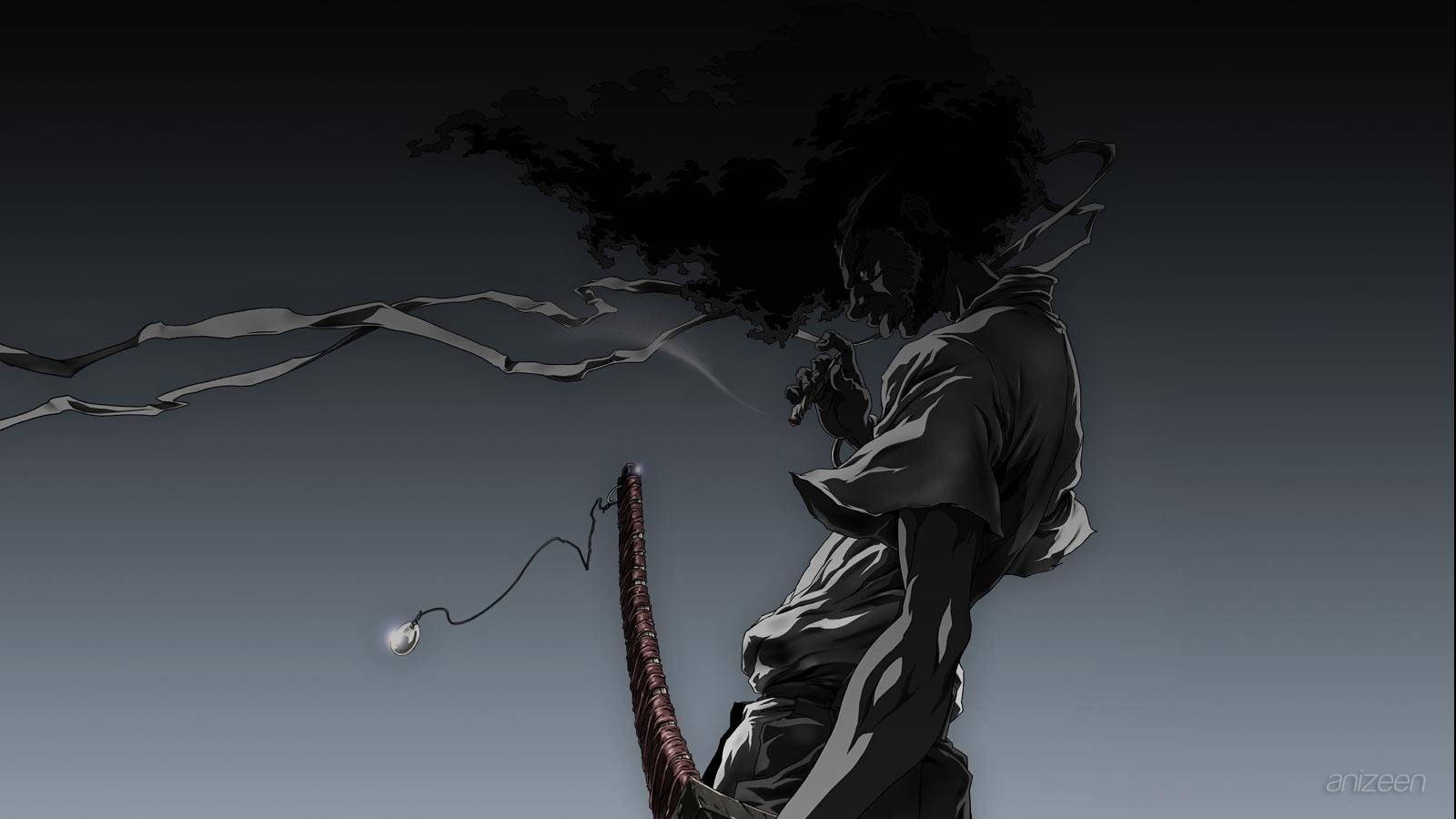 Afro Samurai process began with an English language outline of the show’s basic premise: a warrior searching through a barren landscape — equal parts spaghetti western, feudal Japan and post-apocalypse wasteland — for the man who killed his father. Two Japanese writers began putting meat on the story’s bones, communicating with their American partners via translators.

“There were always a lot of pauses and breaks during the story meetings because everyone was speaking through translators,” remembers Chu. “It was funny when you got mistranslated — something Sam or I said didn’t come across, or something they said got misunderstood as something else.

“Sam (Samuel L. Jackson) to his credit, came to all the story meetings. He had notes and thoughts; he read everything and had strong opinions about what character should be doing.” Once a script had been cooked up to everyone’s satisfaction, a final, born in the U.S. script was handed off to Japanese storyboard artists — who according to Calderon, “changed about 60% of the story. The show was animated to the boards. Once we looked at the animation we had to go back and rewrite most the dialog.”

“Because of the collaboration we came up with something that feels unique,” Chu says. “I don’t think this was too many cooks spoiling the broth — in this case all the cooks had something really strong to contribute. We ended up forging something out of the original property that we wouldn’t have achieved same result if it were just made in the U.S. or Japan.” Calderon describes the end result not as “east meets west. We were going for, and we got everyone to buy into something that was 85% Japanese and 15% freestyle.”

Afro Samurai can’t quite claim credit as being the first samurai/hip-hop crossover. That honor may go to Samurai Champloo, a 2004 anime series that aired on Adult Swim a year later, or even Kung Faux — a goofball, Tiger Lily-type redubbing of chop-socky flicks with inner-city voices shown on the fuse music video channel in 2003. Afro, however is the most ambitious (and visually exciting) effort to date.

An all but monochromatic, shades-of-granite color scheme underscores Afro’s grim quest for his father’s assassin; the occasional touches of color (like a pale yellow glass of lemonade in a dank tavern) stand out all the more as a result. Another color appears far more frequently — generous washes of red as combatants regularly slice, dice and behead one another. (Not eye, but “blood candy” is the term Chu uses to describe the action.) The world is populated by gnarled and angular, narrow-eyed figures — no wide-eyed anime kewpie dolls here.

The mix of swords and cell phones can throw a viewer for a loop the first time one of Afro’s adversaries pulls out a humongous grenade launcher to take him down, but quickly becomes a part of the show’s appeal — along with a moaning-and-groaning sex scene here and there.

The show’s music is courtesy of hip-hop artist RZA, the founder of the seminal Wu-Tang Clan and Quentin Tarantino’s composer for Kill Bill among a slew of other films. “It feels like the music speaks for Afro Samurai,” says Chu. Like Clint Eastwood in Fistful of Dollars, Afro’s “a man of few words — one reason why Sam plays two characters.” Afro is accompanied (and/or pestered) on his quest by Ninja Ninja, Afro’s fast-talking sidekick and one-man Greek chorus.

“Early on in the story meetings Sam said, ‘Wait a second, I need to play Ninja Ninja,'” Chu recalls, “‘otherwise I’ll only have four lines.’ Ninja Ninja is the type of character Sam doesn’t get to play in live action. If you’re casting a squirrelly comedic sidekick, I don’t know if you’d think of Sam Jackson for the role. He got to flex his acting muscles on the character.”

The two other voice performers highlighting the series are Kelly Hu, who battled Hugh Jackman in X2, and Ron Perlman as Afro’s nemesis Number One, aka “Justice.” “This one just fell out of the heavens and into my lap,” Perlman says, his enthusiasm clearly showing. “I heard who was involved and immediately got excited. The project had Sam’s imprint on it, that was the first thing. Then I looked at the visuals, what the animators were doing and the excitement just built.”

Afro Samurai can’t quite claim credit as being the first samurai/hip hop crossover, but it is the most ambitious and visually exciting effort to date.

Perlman considers himself an anime enthusiast, via his friend and Hellboy director Guillermo del Toro, who passed the bug onto Perlman’s son Brandon. “I get it more through my boy than anything else — he’s been to Japan four times already.”

Afro Samurai is set to premiere Jan. 4, 2007, on Spike, with an online New Year’s Eve run on the channel’s website. Depending on its reception, future minis will follow, each one a chapter (and each episode a sub-chapter) in Afro’s ongoing story.

A live-action version starring Jackson is also in the works, currently in development at Mosaic Media by producers Charles Roven (Batman Begins) and Alex Gartner (Barbershop 2). Right off the bat, however, Spike’s Afro Samurai takes the channel in a gutsier direction than its last stab at animated programming, shows like Ren & Stimpy or Stripperella. More at: AWN