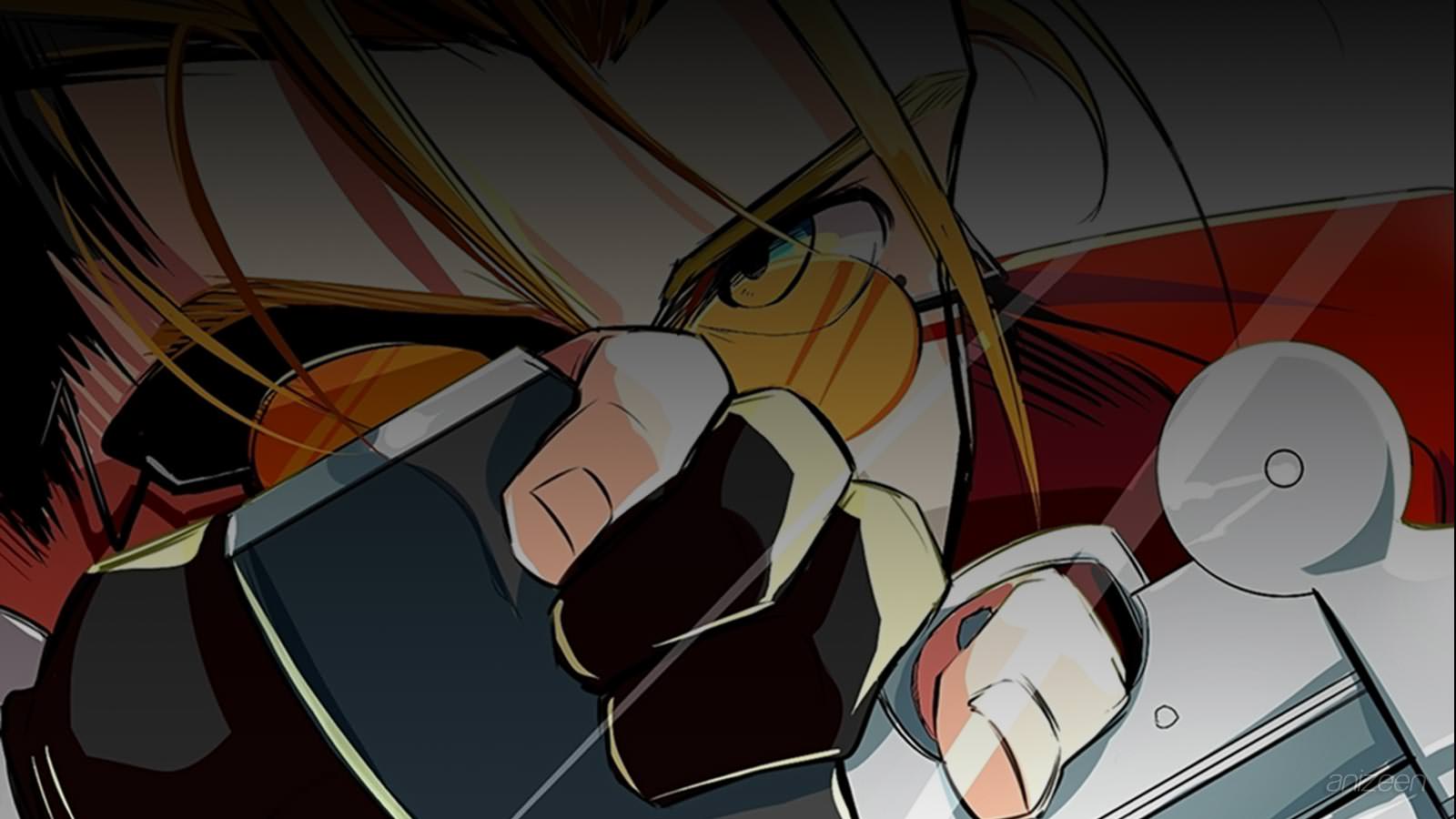 Trigun starts out with an opening scene in a small saloon, a pair of patrons playing card games and gossiping about the Humanoid Typhoon wiping out an entire town.

All is quiet until bartender runs away from looking outside. The pair of guys pull out guns but quickly realize after a giant metal boomerang takes out the top half of the building that this is not ordinary gun fight.

A battalion of guns then blast away the rest of the saloon, except for a sliver of it blocked by the saloon sign. The ones responsible, a group of men with a large towering man with the metal boomerang watches as behind it stands a man in a red coat, blond spiked up hair, and circle shades. He pulls out a large silver hand gun and gunshots are heard.

It then cuts to another scene of a sheriff speaking to another man speaking of the town wiping incident mentioning there were no deaths, he gives a short description of what the humanoid typhoon should look like and the other man walks away.

It jumps again to another bar and two woman walk in, Meryl Stryfe and Milly Thompson. They ask for the whereabouts of Vash The Stampede, the Humanoid Typhoon. We learn here that Vash The Stampede has a 60 billion double dollar bounty on his head.

The bartender says he is unsure but probably headed east and then gives a short description, differing from the one the sheriff gave in the earlier scene.

The scene cuts to the group of guns-men from earlier, who also after Vash The Stampede, specifically for the bounty. One scout walks around and the man in the red coat from before, Vash The Stampede, pops out of the ground tripping him and knocking him out. Flash-backing to earlier Vash was out of bullets at the showdown at the saloon and ran away. Vash does his best to take car of the goons without doing them harm or killing them.

He ends up getting captured by them and is being threatened by the leader of the men until Meryl Stryfe and Milly Thompson enter. They introduce themselves as insurance agents looking for Vash The Stampede. The man talking to the sheriff previously also shows up, after the bounty.

They then ask Vash to warn the town and head back to the other guns-men, completely unaware they were just speaking to the real Vash The Stampede.

They get captured by them and threatened until Vash returns, acting clumsy, but allowing them to escape. He gets cornered on a cliff by the others given two choices: boomerang or suicide. Vash declares: “I disapprove of suicide more than anything.” Then he takes the leader down and the other guns-man after the bounty also gets taken out by the boomerang coming back.

All seems well and good but unfortunately a stray bomb blows up part of the cliff, damaging the town below.

Meryl Stryfe and Milly Thompson are back at their insurance office, writing up the damage report. Milly suggests that the man who saved them might be Vash The Stampede, but Meryl denies it.
The last scene of the episode shows towns people discussing the damage and how there were no deaths, given that Vash The Stampede passed through. Our protagonist, The Humanoid Typhoon himself, can be seen walking across the desert, wandering again.

The rest of the series is a comedy and action packed tale of Vash The Stampede, perceived as the most dangerous man alive when in actuality, he is a wandering pacifist trying to do good in the world as well as be forced to face his past.

Trigun
(トライガン)
The manga was created by Yasuhiro Nightow. The series was serialized in Shounen Captain in 1995 until the magazine was discontinued in 1997. The series then continued in Young King Ours magazine until it finished in 2008. The anime was produced by Madhouse and aired from April 1st, 1998 to September 30th, 1998 with a total of 26 episodes.
OP
S1. “H.T.” ~ Tsuneo Imahori
ED
S1. “Kaze wa Mirai ni Fuku” ~ AKIMA & NEOS
WEB