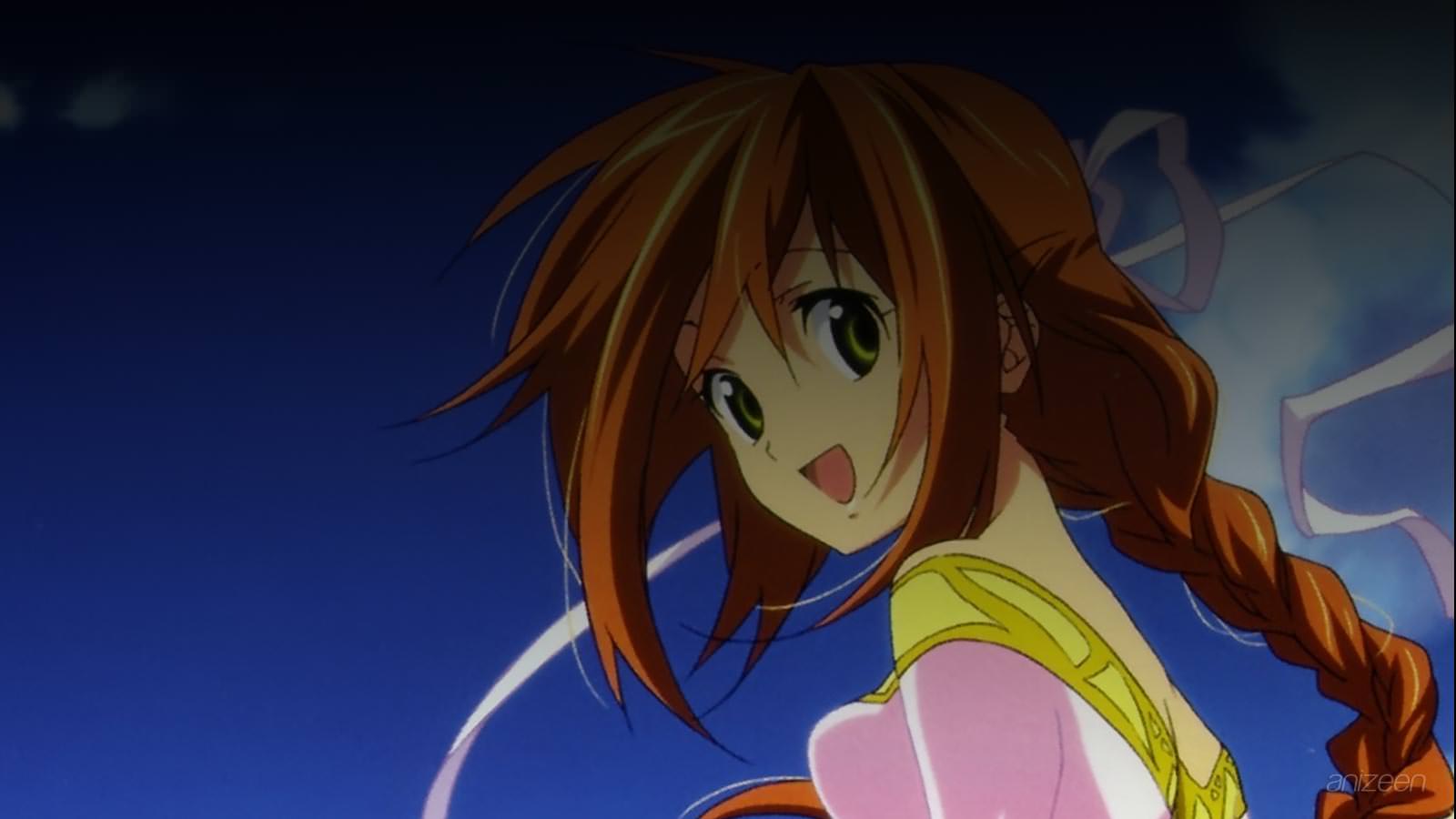 When Yumemi looks at the sky or its reflection too long she sees visions of a massively destructive magical war that is occurring in those islands in the sky. This islands that Yumemi sees are part of a world that exists in a different dimension very near to Earth.

The war that Yumemi sees involves various magical factions on the kingdom in the sky, and at least one of those factions wants to make use of powers from Earth to assist them in their battles. That’s how, Munto, a young ruler of one of the magical kingdoms makes the effort to reach out to Yumemi, whose ability to see the floating world indicates that she has the powers that are needed in the war in the magical world.

One day, while on her way to school after a heavy downpour, Yumemi becomes lost in a vision of the magical world, which allows Munto to contact her. Munto asks Yumemi to come with him to the magical world, but Yumemi fearfully refuses.

When Munto attempts to grab Yumemi and bring her back by force he is repelled and injured by the touch. At that moment Yumemi’s friends shake her out of her vision and the connection is broken. But Munto isn’t deterred and becomes more determined to bring Yumemi over to his world, even as a number of Munto’s enemies plan to stop him.

Yumemi Hidaka is the only person who can see the “floating islands in the sky.” She is afraid of her ability because it makes her different from others, and has learned the hard way that most people don’t believe what she sees. Because of this, she keeps her gift to herself, carrying a pink umbrella to block out the view of the sky. She is a dreamy, quiet, gentle person, with a caring and compassionate personality. Because of the connection with Munto, she is constantly haunted by images of Munto’s past and is confused and tormented as to why she sees them.

Munto is ruler of the Magical Kingdom, one of several kingdoms in the sky. He deliberately falls to the dangerous Lower World in a desperate bid to contact Yumemi and save his people and the heavenly world. He is proud and stubborn to a fault, but also strong, courageous and caring. Like Yumemi who sees his past, he sees hers in exchange. He grows closer to her in that sense and is even more hesitatant to reach out for her help as a result of this, afraid that if he does, she would disappear in an instant, a theory that terrifies him so.

Ryuely is a prophetess under Munto’s supervision who has the gift of foresight. She sacrifices her own vision to help Munto find the way to restore Akuto and monitors his journey from the Heavens. Calm and collected, she is a motherly figure, especially to the young Toche. She has great faith and respect for Munto, and willingly gave up her eyesight for him, showing no regrets for doing so, although she regained it by the end of the first OVA.

Gass is the enigmatic guardian of Time, Gass is described as an “Outsider,” which may explain his and Irita’s Arabic-themed clothing. Despite the dangers of overstepping his role, he allows Munto to slip through a hole in time to find Yumemi. Because Gass allowed Munto to pass through time, his body slowly begins to rot away. This is because of he neglected the role as a guardian of Time during the first crisis, but he is shown to accept this and continues to battle against the opposing forces against the Magical Kingdom.

Irita is a small, imp-like girl who is constantly seen with Gass. She is shown to care for him deeply and treats him with the utmost respect and trust, crying out in fear when he is hurt. Gass also seems to care for Irita, diving into space to catch her when she is falling. Her personality is mischievous and spunky.

Gntarl is in command of the united armies. He is a cunning and dangerous person who hungers for power. He is the one who directs the attacks against Munto’s Magical Kingdom in an attempt to seize control. He had been keeping close watch over Yumemi in the Lower World, and that he too seeks her power. Thanks to: D. Baranyi

Sora o Miageru Shoujo no Hitomi ni Utsuru Sekai
(空を見上げる少女の瞳に映る世界)
Is a Japanese anime television series produced by Kyoto Animation and directed by Yoshiji Kigami. The anime is a continuation of Kyoto Animation’s two-episode original video animation (OVA) series Munto, and began airing in Japan on January 14, 2009 on Chiba TV. The anime will include an updated director’s cut of the OVA episodes with new animation and footage.
OP
S1. “Anemoi” ~ eufonius
ED
S1. “Hikari to Yami to Toki no Hate” ~ Ceui
WEB

ED ~ Hikari to Yami to Toki no Hate