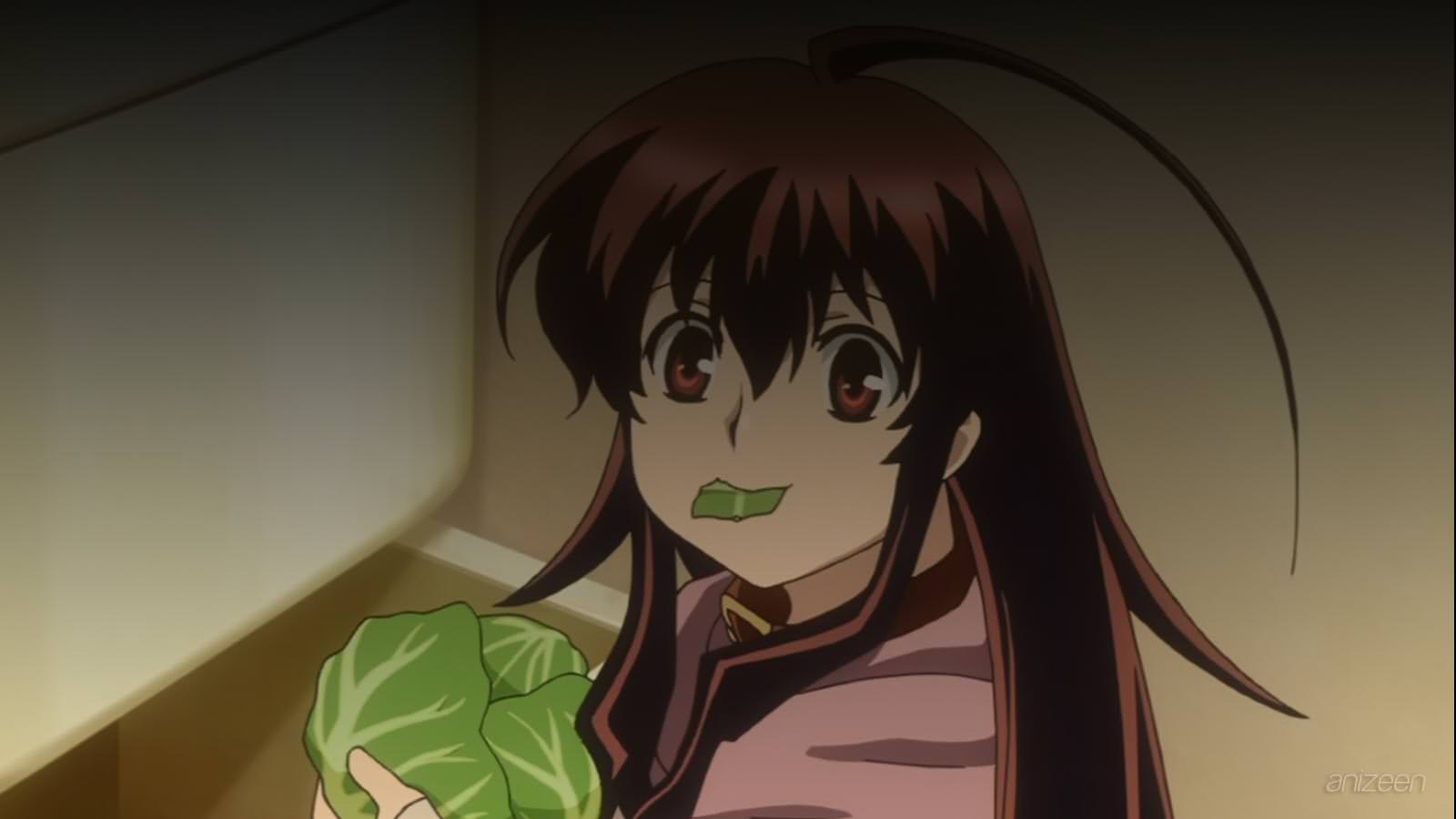 Keita Ibuki lives alone in an ordinary apartment building. He is cared for by Akane, a friend of Keita’s late mother, and some of the nice neighbors. Keita is bothered by memories of his mother’s death. One day when Keita was small he and his mother saw another woman who was an exact duplicate of Keita’s mother.

Keita’s mother was then run down and killed by a car as she tried to cross the street to confront the woman. People are now dying in mysterious accidents in increasing numbers in the city where Keita lives, and soon a classmate who sees one of this duplicates dies, as does a neighbor’s little girl.

In the midst of this situation a mysterious girl called Kuro appears with her little dog. Kuro runs into Keita at an outdoor ramen stand and she begs a meal off of him. Just as the starving Kuro starts to enjoy her food a huge man with a big baseball bat comes up behind Kuro and smashes her in the side of the head with the bat. Kuro gets up, yells at the man for interrupting her dinner, and proceeds to beat the man to a pulp.

After the fight Kuro and her little dog disappear, but they appear again the next day just after Keita witnesses his neighbor’s daughter get hit by a truck while crossing on a green light at a crosswalk.

Kuro explains to Keita that the little girl was one of three identical people, but since the girl was not an original, she had to die after seeing her “root”.

Keita Ibuki, as a child, he and his mother met a person who looked exactly like her. The next day, she died. Years later, he’s an ordinary high school student. Unlike his manga counterpart he is neither extremely arrogant nor openly antagonistic of Kuro. He does not physically assault her either to express his displeasure and finally unlike his manga version Kuro trades their hearts not their arms when forming a contract.

Kuro becomes Keita’s partner. As a child, she was princess of the Tera Guardians. However, tragedy met up with her when her most cherished brother slaughtered her whole tribe. She came to the human world to stop him. Her manga version fights using boxing having learned it from a former professional boxer while her anime version does not have any particular style. Both however use an Exceed which massively increases her offensive power.

Akane Sano is Keita’s childhood friend. Her doppeliner is one of the main antagonists and the partner to Reishin. She has romantic feelings for her childhood friend, Keita.

Excel, her real name is Maria. After she is rescued by Steiner from “alter egos”, who killed her younger brother, she asks Steiner to make a contract with her to make Steiner stronger. Her childlike appearance is the result of a mutation caused by her contract with Steiner; it severely slows down her physical growth and aging process. As a veteran contractee, she has gained considerable experience and a keen insight. She possesses several combat accessories called “thousands”, but only two are shown in the manga. One is the Hex Ring she wears to create the Hex Shield which blocks attacks. The other one is the ring she gave to Keita.

Steiner is a high Tera Guardian of the German High-Council. He prides himself on his unparalleled combat skills that single him out from the many high Tera Guardians employed at “The Noble One.” He also possesses nerves of steel, those don’t prevent him from getting his personal feelings mixed up in his duties. His “Exceed: Stampede” splits his body into four clones with equal mass and power to attack the enemy. Though the clones follow the command of the original body, they can also judge the situation of the fight autonomously.

Reishin is Kuro’s Brother. His mother, the priestess of his Shishigami clan told him of her prophecy that either he would lead the tribe into prosperity and everlasting order under his rule as “a bringer of peace” or would be “a bringer of destruction” destroying all in his path. Thanks to: D. Baranyi

Kurokami The Animation
(黒神 The Animation)
Is a Japanese manga series story authored by Dall-Young Lim and art by Sung-Woo Park, which is published in Japan under Square Enix in Young Gangan, a bi-monthly magazine which publishes seinen manga. The story is set in modern day Tokyo, Japan at the beginning before the scenery changes to the island of Okinawa in the middle of the story. The manga was created entirely by a Korean manhwa team led by both Lim and Park. Since none of them were familiar with the entire Japanese language, they would make fun of this flaw. An anime adaptation has been announced recently, with animation work to be done by Sunrise. It would air on January 8, 2009.
OP
S1. “Sympathizer” ~ Minami Kuribayashi; “tRANCE” ~ GRANRODEO
ED
S1. “Irodori no Nai Sekai” ~ Yousei Teikoku; “Gekkou no Chigiri” ~ Yousei Teikoku
WEB