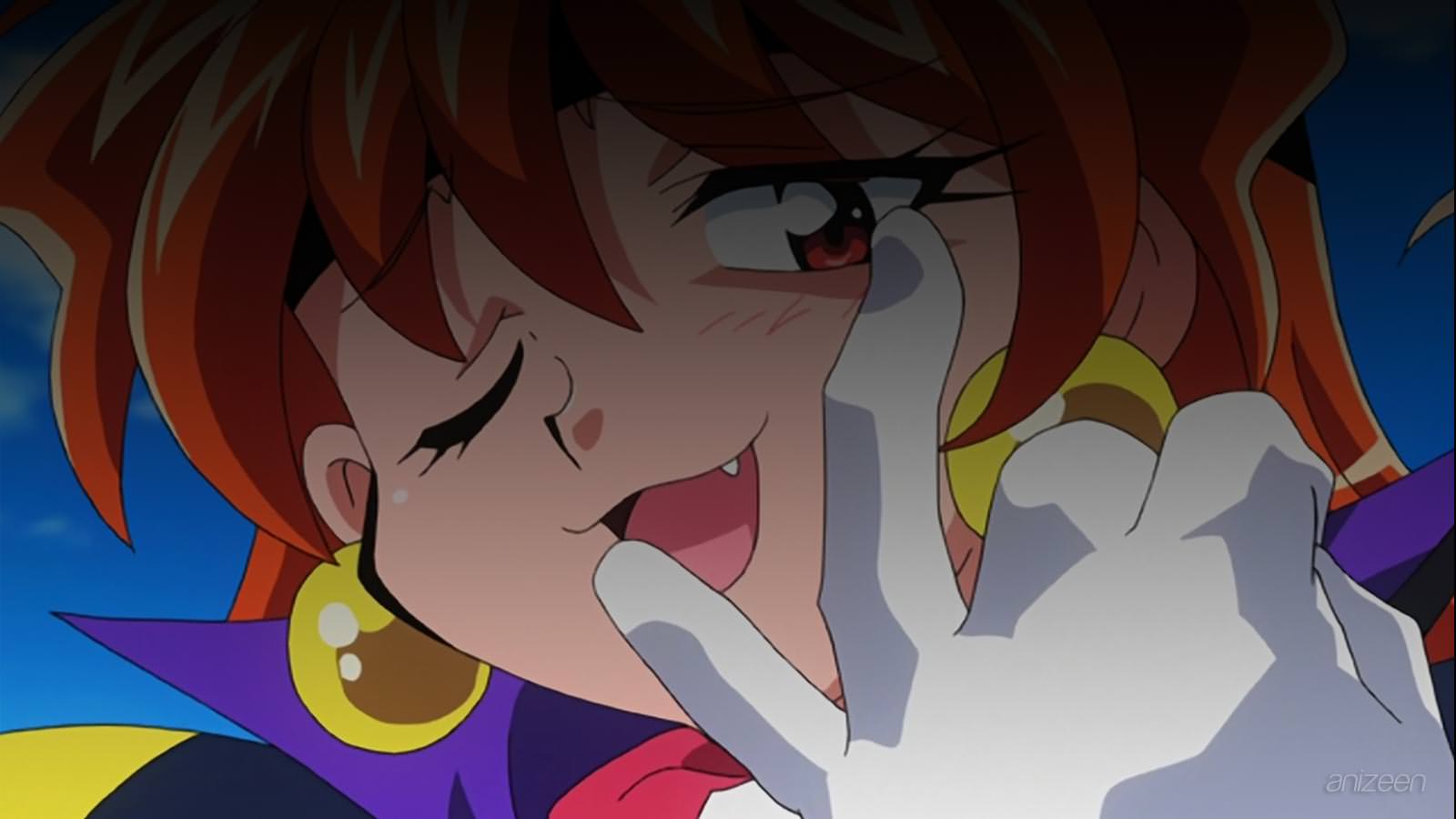 Lina Inverse, a wandering sorceress and bandit-killer, joins forces with roving swordsman Gourry Gabriev in what’s supposed to be a quick union of convenience.

Instead, an artifact Lina “liberated” from a gang of thieves turns out to be the key to the resurrection of the demon lord Shabranigdo. Urged on by the mysterious Red Priest Rezo, the pair has no choice but to fight the dark lord and his servants, accumulating new allies and enemies along the way.

In Slayers Revolution, having lost the Sword of Light in the previous battle, Lina and Gourry continue their journey in search of a replacement weapon. On the way, the two of them meet up with Amelia and Zelgadis in the kingdom of Luvinagard. Lina starts attacking a pirate ship for plunder and them begging for their lives once they are told who she is by a fishwoman. After that Amelia comes in and tears up the pirate fleet with Zelgadiss and they go back to Seyruun.

Lina is happy to reunite with her old friends, but appearing before her is Luvinagard’s Inspector of the Special Investigative Unit; a man called Wizer, who turns out to be there to arrest Lina on suspiscion of being Lina Inverse. You know that in and of itself is some pretty big baggage to carry, so they run away and start fighting.

Lina Inverse is the primary protagonist and the only character that appears in all incarnations of Slayers. She is an adolescent but very powerful sorceress, with a great love of money, treasure and food. In the anime and manga Lina uses overly destructive magic recklessly, often with little provocation. She is reputed to be an evil, powerful, destructive, diminutive and flat-chested sorceress.

Gourry Gabriev is a wandering swordsman who meets up with Lina in the first episode of the first television series. He accompanies her from then on. He carries the fabled Sword of Light, originally known as Gorun Nova before it came to the Slayers world. He is somewhat less than scholarly and appears to have serious memory deficit, but his skills as a swordsman are unmatched throughout the franchise.

Zelgadis Greywords is a sorcerer who begins the various incarnations of the franchise as a retainer for his ancestor Rezo, opposed to Lina, but ends up in Lina and Gourry’s group. He is a chimera made of rock golem, brau demon, and human. Zelgadis Greywords tends to become something of an enigma to his comrades, due to his quiet and antisocial nature.

Amelia Wil Tesla Seyruun is a young miko and the princess of Saillune with an unwavering belief in justice. She joins Lina’s group during the first TV series. Amelia longs to be a “hero of justice” and quixoticly pursues her quest by following Lina and fighting villains. Amelia’s naive tendency to believe whatever she is told sometimes leads her to mistake friend and foe.

Xellos is a high level Mazoku, who is thousands of years old. Xellos is the Priest and General of “Greater Beast Zelas-Metalium”. Great Beast is described as one of the five demon lords “given birth to” ~ Shabranigdo. The remaining 3 of the 5 demons lords each has a Priest and a General imbued wtih tremendous power, although Greyschwaller has 2 of each. In Xellos’ case, he serves as both Priest and General to Zelas, making him the most powerful being in the world outside of the Mazoku and Dragon gods.

Slayers Revolution
(スレイヤーズ REVOLUTION)
Started airing in Japan on July 2, 2008 and Megumi Hayashibara performed both the opening and ending theme songs. Revolution is a 26-episode series that follows an original storyline, with series director Takashi Watanabe and production studio J.C. Staff, reprising their duties from the three original TV series. It picks up from the point of Slayers Try after Gourry gave up the Sword of Light and will follow Lina and Gourry as they attempt to find a weapon to replace it. Amelia and Zelgadis join them once again along with a new character in the series named Weiser, an inspector of the Special Investigative Unit for the kingdom of Luvinagard. Other confirmed characters in Slayers Revolution are the returning Xellos and two characters named Kuppy and Pokota.
OP
S1. “Plenty of Grit” ~ Megumi Hayashibara
ED
S1. “Revolution” ~ Megumi Hayashibara
WEB