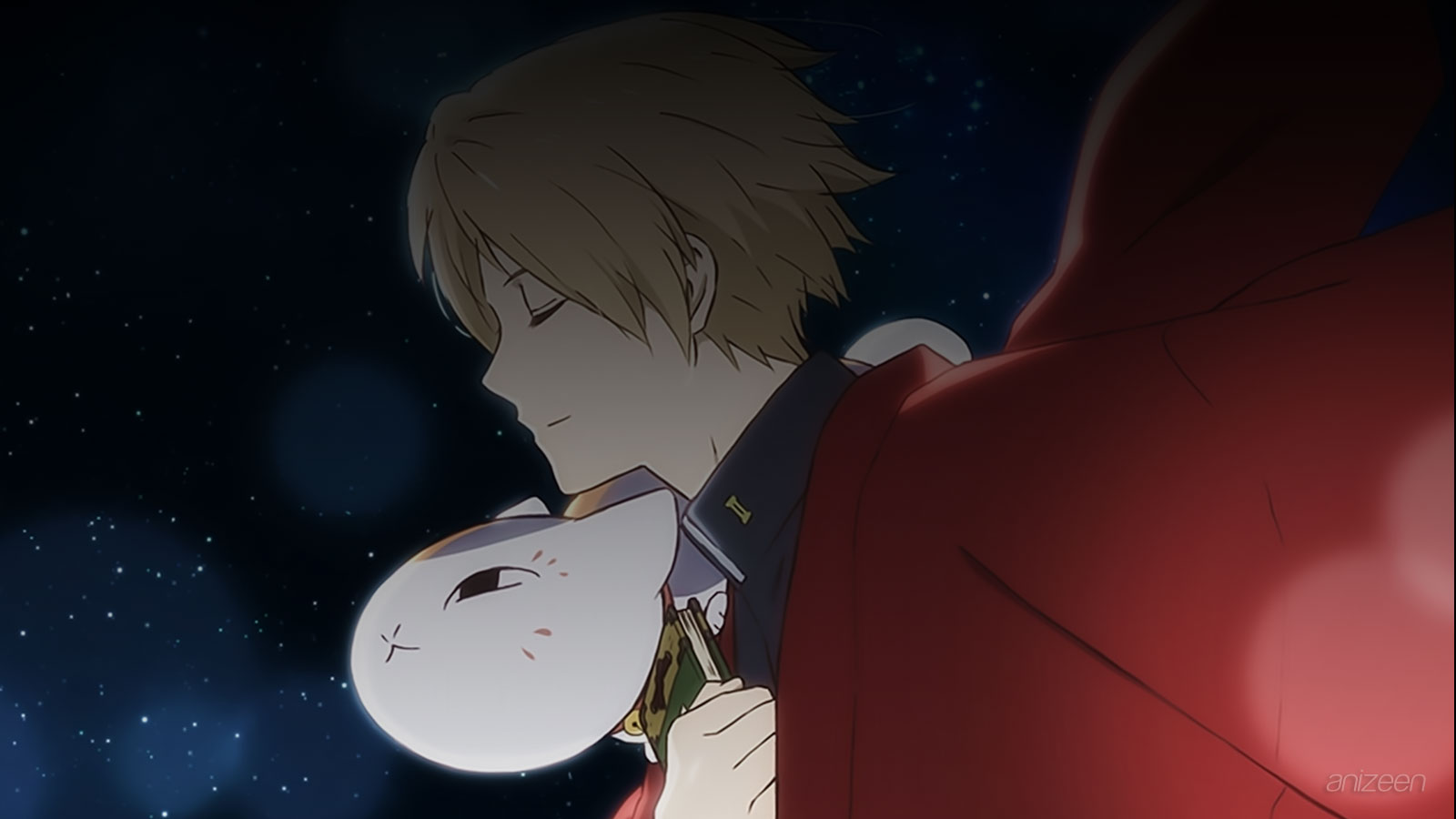 High school student Natsume Takashi has been able to see youkai since he was a little boy. This hasn’t done him a lot of good, since no one believes him, and it tends to leave him a bit isolated. Natsume’s usual response when he is accosted by a youkai is to find the nearest jinja, which tends to get rid of the spirits. But one day Natsume is being chased by a large youkai with a huge single eye, who keeps on calling him Reiko, which was his grandmother’s name.

This spirit catches Natsume and pins him against a tree while demanding that he give her some book. Natsume has no idea what is going on, but when a second, slightly more humanoid youkai shows up, Natsume is able to punch the first youkai in her large single eye and escape into the jinja.

But while Natsume runs breathlessly up the stairs of the jinja he loses his footing and falls off of the stairs, breaking an old rope that is holding a spell around a small wooden shrine at the side of the stairs. A loud voice calls out from the shrine, and as Natsume desperately attempts to re-tie the rope, the shrine blasts open, and inside is Madara. Natsume laughs at this, but then he sends out a powerful blast and flies out to confront Natsume.

The youkai then disappears and Natsume returns to the place where he has boarded for the past while. There Natsume digs around in the boxes of things that his grandmother left to him and finds the book, which has the title “Yuujin-chou“, which means book of friends. Inside are pages with a youkai name written on each page. The maneki-neko then returns and tells Natsume more about the book and about his grandmother.

When his grandmother was a teen she was fond of harassing youkai. She would chat with a youkai, who would be surprised that a human could see it, and then Reiko would “defeat” the youkai by hitting it with her old wooden baseball bat, and demand that the youkai give her a page with its true name written on it. This would create a bond of friendship (despite the rather harsh approach). But Reiko was rather capricious, and often never looked up her youkai “friends” again, which caused the youkai to eventually look for her, and thus to start to harass Natsume after his grandmother died.

The first two youkai then show up and a chase starts as Natsume desperately tries to run away from them. Madara shows up and helps Natsume to temporarily escape his pursuers. But Madara wants the book too, and when Natsume refuses to give it to him Madara changes into his real form, which is that of a giant canine. The youkai pins Natsume’s body to the ground and threatens him, but Natsume still refuses to hand over the book and instead punches the youkai hard in the snout.

This causes the youkai to release Natsume and the two sit and catch their breaths while Natsume explains why he won’t just hand the book over to this youkai or any other. The book was special to his grandmother, and contained special links between her and the individual youkai whose names she had in the book, so Natsume couldn’t give it away.

Sasada is the class president of Takashi’s class. Sasada believes that Takashi can see spirits, and constantly asks him questions about it, to which he replies that he doesn’t have such an ability. Much to Takashi’s chagrin, she wants to come along with him when he’s visiting spirits. Thanks to: D. Baranyi

Natsume Yuujin-Chou
(夏目友人帳)
Is a japanese manga by Yuki Midorikawa serialized in LaLa DX (Hakusensha) from 2005 with 5 volumes (ongoing). An anime adaptation started airing in Japan on July 7, 2008 and is produced by Brain’s Base on TV Tokyo.
OP
1. “Issei no Sei” ~ Shuuhei Kita
ED
1. “Natsu Yuuzora” ~ Kousuke Atari
WEB