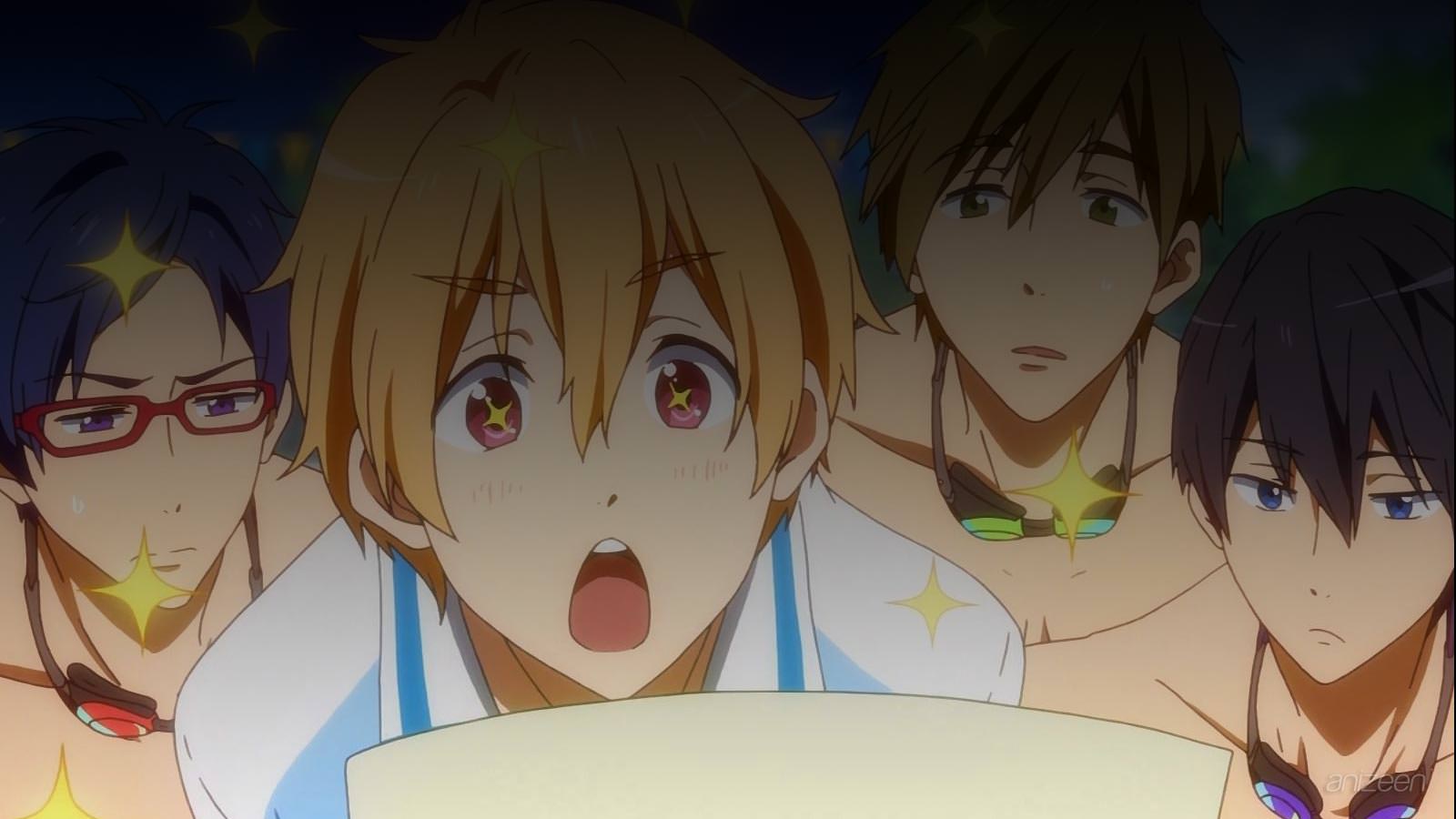 Haruka Nanase is a boy who really likes water in his liquid form. A flash back shows Haruka when he was in elementary school, at the Iwatobi Swimming Club, where he met Matsuoka Rin, who ask them to practice for a relay competition. Haruka declined though.

Now, several years later, he and his childhood friend Makoto Tachibana are in the same high school, and there they met with another childhood friend of them, Nagisa Hazuki. The three of them used to be at the Iwaboti Swimming Club all the time practicing together. Nagisa suggests to start a new Swimming Club in the Iwaboti High, but Haruka declines.

That night after school all of them are reunited in Haruka’s place, and they decide to go to their old Swimming Club to get inspiration. When they finally get there, they met up with a guy who looks like a stranger, but he turns out to be Rin Matsuoka.

Rin’s behavior is different as they remembered, he seems colder. And Haruka is also less hearted in his response. To end the argument, both of them decide a competition, ignoring Makoto and Nagisa. In the end they couldn’t swim due to lack of water in the pool, after that they all go by different ways.

The next day seeing how depressed Haruka is, Makoto starts considering more and more the idea of founding a new Swimming Club at Iwatobi High. They get scolded by the Principal, due to entering into the Swimming Club at night.

After that, Makoto starts looking for Rin at school, thinking that he’s probably assisting with them. Instead, he finds his sister, Gou. She goes to see Haruka but doesn’t find him, and then he meets up with Makoto and Nagisa. The three have a chat, and she tells them about his brother.

Later Makoto and Nagisa are in Haruka’s place trying to convince him to visit Rin at, Samezuka High School, a prestige school with a skillful swimming team.

They finally convince him when Makoto says that Samezuka has a huge indoor pool. When they arrive there, it becomes a task to contain Haruka not going into the pool before the night falls.

With no one around they get into the pool and Rin finds them, he ask them to leave, but Haruka challenges him.

Free!
(フリー)
Is an anime series directed by Hiroko Utsumi and produced by Kyoto Animation and Animation Do. The anime is based on the light novel written by Kouji Ooji, High Speed!, which received an honorable mention in the second Kyoto Animation Award contest in 2011 and later published in July 2013. The anime began airing in Japan on July 4, 2013.
OP
S1. “Rage on” – OLDCODEX
ED
S1. “SPLASH FREE” – STYLE FIVE; ED2: “EVER BLUE” – STYLE FIVE
WEB