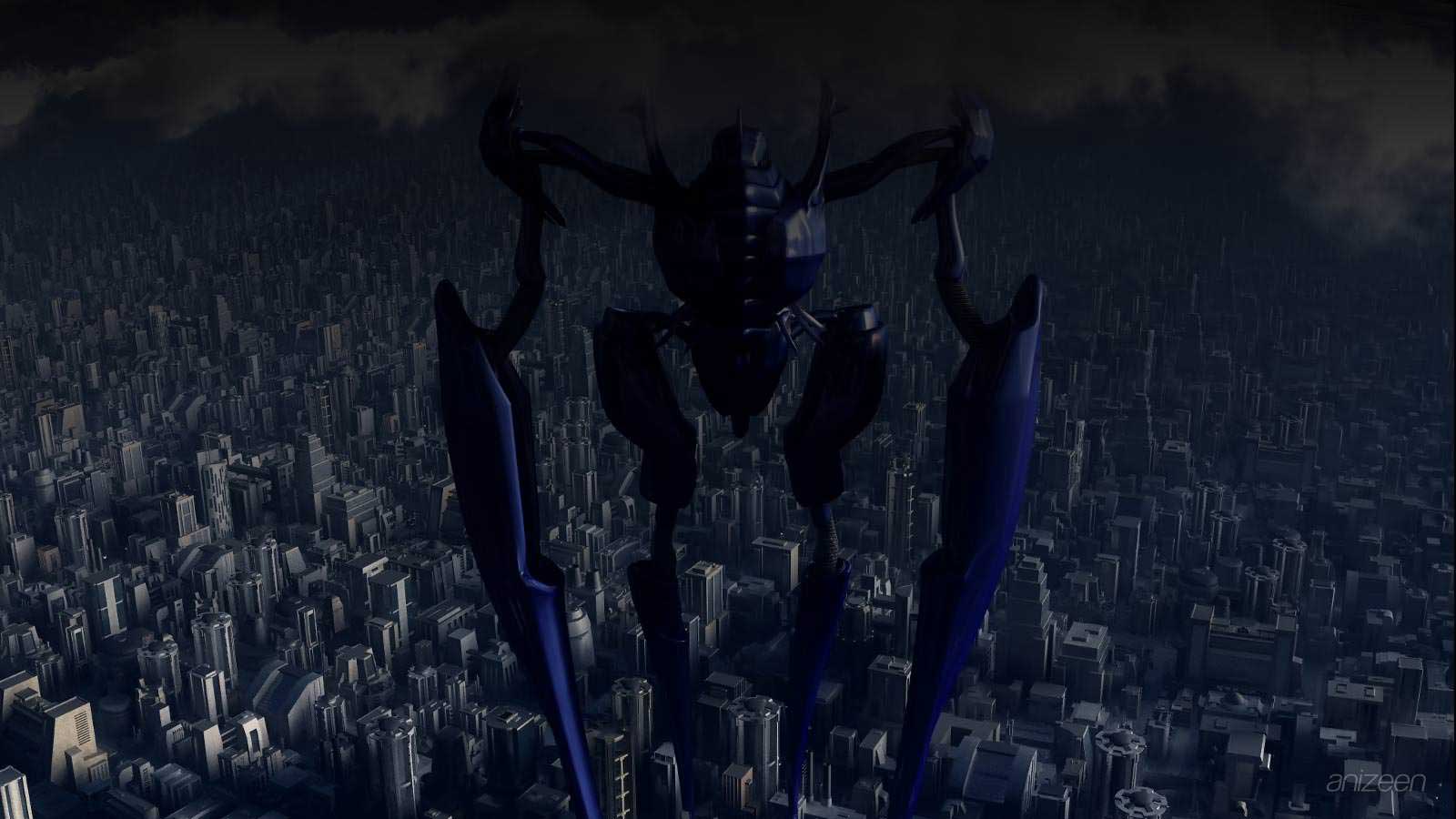 During a summer camp, 15 children, 8 males and 7 females, find a grotto by the sea. Deep within they discover working computers and some electronic equipment, and later the owner, a man called Kokopelli.

He claimed to be a programmer working on a brand new game, in which a large robot has to defend the Earth against fifteen alien invasions. He persuades the children to test the game and sign a contract. All but one of them signs, barely a moment later they mysteriously awaken on the shore believing what happened was just a dream.

That night, two giant robots appear suddenly by the beach. A small creature, calling itself ‘Dung Beetle‘, appears and claims to be their guide. It then teleports the children into the black robot. They find Kokopelli already inside and controlling the black robot in order to defeat the white enemy robot.

During battle he gives the children a brief tutorial on how to pilot the robot as he destroys the enemy. Once he has finished he tells the children that they are on their own now and sends them back to the beach. As the children are teleported out, one child observes Kokopelli whispering “I’m sorry”.

Bokurano’s stories tend to focus exclusively on one character – the next pilot. It starts with some backstory on the character, their underlying motivations, while building up to their battle. The chapters themselves are named after the character of focus.

Kokopelli was the man who involved the children with Zearth, as well as the first pilot of the series. When the children first encountered him, he was hiding in a cave by the bay where the children were exploring. He seemed surprised to find them but persuaded the children into becoming pilots of Zearth by telling them he was looking for volunteers for a new game. Later, when the first battle takes place, he appears before the children within Zearth’s cockpit, wearing a jet-black jumpsuit and sitting in a chair. From there, he teaches the children how to pilot Zearth as he destroys the first robot

Takashi Waku was an energetic and confident young boy. He was previously a talented soccer player and is considered popular. He wanted to become a professional player and his friends thought he had the talent for it. However, he found out that his salary-man father was a soccer player just like him in his youth and even played at the national level. The fact that someone just like him didn’t make it shook Waku’s resolve and he stopped playing soccer. He was chosen to become the first pilot of the children.

Masaru Kodama is the boy chosen to pilot Zearth during the third battle. He is a relatively quiet boy who likes to keep to himself. His father is a wary individual who runs a civilian contracting company. Kodama’s two gifted older brothers hate their father and try to go towards a different path, however Kodama looks up to him and his status as a “chosen” man. Being raised by his father seems to have warped Kodama’s sense of ethics and morality to the point where he enjoys to take shots at stray cats with a pellet gun.

Daiichi Yamura was a hard-working and responsible boy despite his gruff “no-nonsense” exterior. He dedicatedly took care of his three younger siblings: Futaba, Santa and Yoshi. He accepted this task because their mother had died much earlier, and their father abandoned them for unknown reasons three years ago. Their uncle on their father’s side made up for his brother’s disappearance by renting a home for the four siblings to live in, and paying for all expenses. Daichi earned his keep by working as a mail and newspaper boy, and for his uncle’s landscaping business on his days off.

Mako Nakarai s a girl who focuses all of her energy on living honestly and being an active benefit to the community in hopes that others would see her as a responsible and dependable person. Despite this, the well-known fact that her mother is a prostitute and her humorless, over-responsible attitude leaves her with no friends. Ever since elementary school, any kind of hatred or dishonesty tortures her, so much that she can’t even raise a clenched fist at all of the kids who bully her, constantly having to keep to her duty and not protest in the slightest.

Bokurano
(ぼくらの)
Is the newest manga by Mohiro Kitoh, serialized monthly in Japan in Ikki since 2003; currently 6 tankoubon have been published by Shogakukan. An anime series directed by Hiroyuki Morita and produced by GONZO began to air in April 8,2007 in SUN-TV. A light novel series called Bokura no: Alternative with an alternative story by Renji Ouki and character designs by Kitoh himself.
OP
1. “Uninstall” ~ Chiaki Ishikawa
ED
1. “Little Bird” ~ Chiaki Ishikawa; “Vermillion” ~ Chiaki Ishikawa ep 13-14
WEB

Next
Darker than Black – Kuro no Keiyakusha (2007)