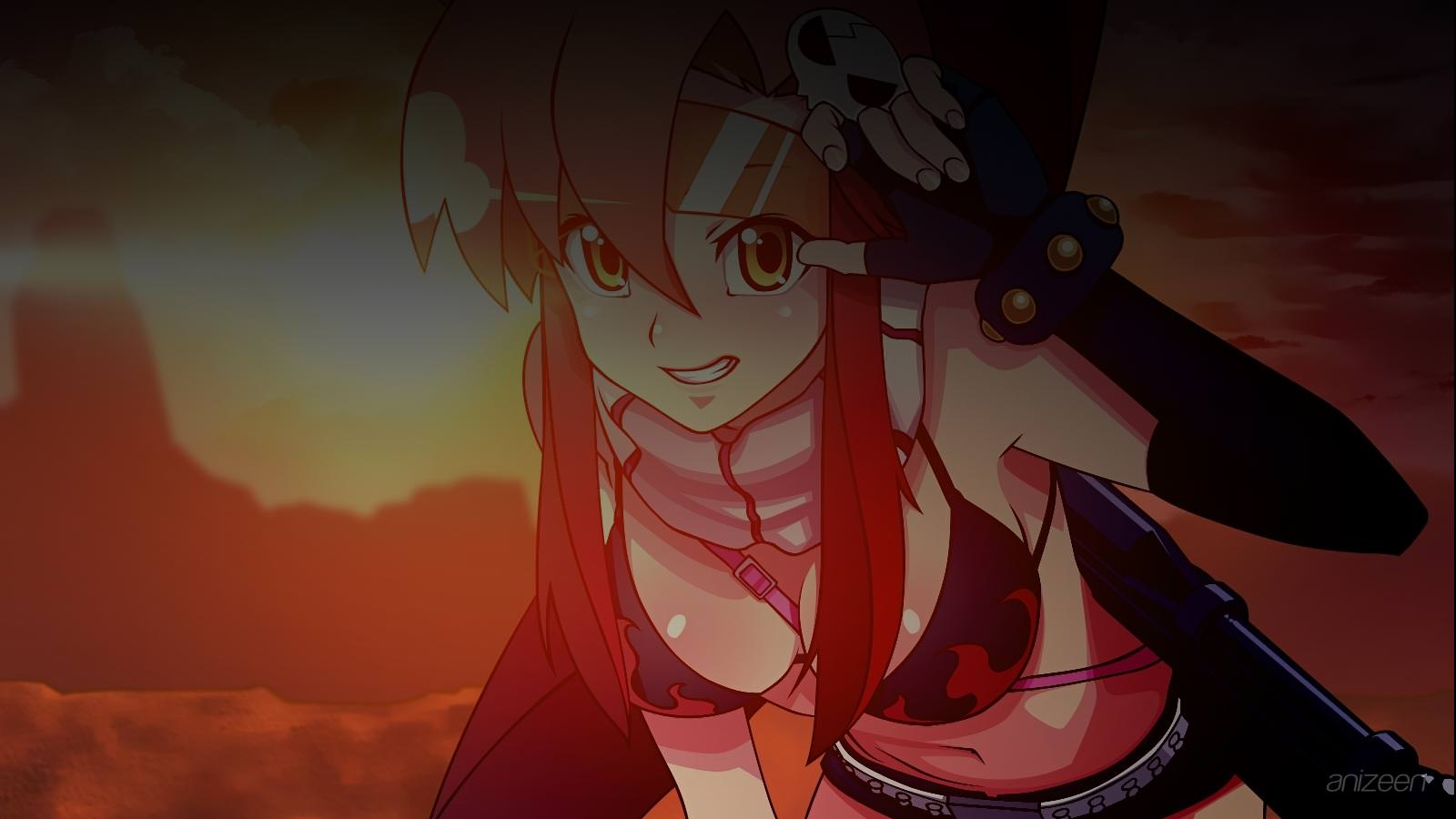 Tengen Toppa Gurren Lagann takes place in a fictional far future where human beings have been forced underground and thrive in isolated subterranean civilizations. These “villages” have no contact with the surface world nor other villages. Since frequent earthquakes damage infrastructure, the villages must constantly expand deeper into the earth — individuals designated to this task are known as “diggers”.

Jiiha Village is the home of Simon, a fourteen year old digger who was orphaned when his parents were killed in an earthquake. He is respected by the village elder as the best of the diggers, but is ostracized by his peers. After discovering a special drill key deep in the ground, he is recruited by an eccentric fellow orphan named Kamina into his group, the “Gurren Brigade”. Kamina dreams of the surface world, which he visited as a child with his father but had to return home because he was too weak to survive.

After a failed attempt at reaching the surface, Kamina is jailed by the elder and Simon resumes digging, only to discover “a big face” deep in his tunnel. As he excitedly fetches Kamina to show him the discovery, he is caught by the village elder, but Kamina’s punishment is interrupted by the ceiling of Jiiha Village collapsing as an enormous robot falls into the cavern. A fourteen year old girl named Yoko appears and tries to fight the robot with a large rifle, but initially cannot do much. Simon takes Kamina and Yoko to the “big face” he found earlier and discovers that the small drill key can be used to activate the small robot which he uses to end up destroying the much larger robot and effectively break through to the surface.

It is on the surface that Simon and Kamina discover that there are more large robots known as Gunmen piloted by “Beastmen” that terrorize the surface dwellers during the day. Simon and Kamina help Yoko and her village destroy three more Gunmen and Kamina takes one for himself, naming it Gurren. Eventually, Simon and Kamina decide that they will go on a journey to end the constant struggle between Beastmen and humans. Simon and Kamina are initially accompanied by Yoko and a mechanic from Yoko’s village named Leeron as they head out to find the Beastmen’s Human Eradication Army main head-quarters.

Simon is a fourteen year old digger from Jiiha village. One day, he finds a mysterious drill-shaped item, which is later revealed to be the key for a head-shaped robot he dug up some time earlier. With the help of the robot, Kamina, and Yoko, he fights off a Gunmen who broke into the village. While finishing the Gunmen off with a drill-like attack, they reach the surface world.

Kamina is a young man from Jiiha village who dreams of leaving the village and go to the surface, which he saw as a kid. He convinces Simon to help him with his plan to drill through the roof of the village and get to the world above, but the plan failed and he was put in prison. He left the village shortly thereafter with the help of Simon and a young girl named Yoko, as a result of fighting a Gunmen, who broke into the village from the surface.

Yoko is a girl from Jiiha’s neighboring village Ritona, who had been chasing the Gunmen which entered Jiiha village. She wields an extensive range of firearms and has previous experience fighting Gunmen. Although she is in the same age group as Simon, she is mature and one of the most rational of the group.

Nia is a mysterious young girl found sleeping in a capsule in the middle of a dump site by Simon during the aftermath of episode nine’s battle. She has had no prior contact with humans and is the daughter of the Spiral King.

Viral is a Beastmen who is skilled with Gunmen and close-combat. During a hunting trip, he attacks Kamina, but has to retreat to his Gunmen. He manages to overcome Simon and Kamina’s attacks, but leaves before the fight ends since the day has ended. The next day, Kamina and Simon challenge Viral again; this time however, Viral is defeated. Viral barrages Gurren-Lagann with missiles to conceal his escape.

Tengen Toppa Gurren Lagann
(天元突破グレンラガン)
Is a Japanese anime television series animated by Gainax and co-produced by Aniplex and Konami. It has been scheduled for twenty-six episodes and premiered on April 1, 2007 on Japan’s TV Tokyo network.[1] It is directed by Hiroyuki Imaishi and has been in development since his participation in the Abenobashi mecha themed episodes by the same studio. Konami has announced that they will make a video game to accompany the series, but no other details are currently known. Takami Akai, the producer of the series and a co-founder of Gainax, announced that he would resign his position effective episode five, which aired on April 29, 2007, over comments that he made regarding posts on the Japanese Internet forum 2channel. Akai and another Gainax employee, Keiko Mimori, made disparaging remarks about comments criticizing the animation style of Gurren Lagann, specifically the fourth episode, which was completely directed by guest Osamu Kobayashi.
OP
S1. “Sorairo Days” ~ Shoko Nakagawa
ED
S1. “Underground” ~ High Voltage
WEB