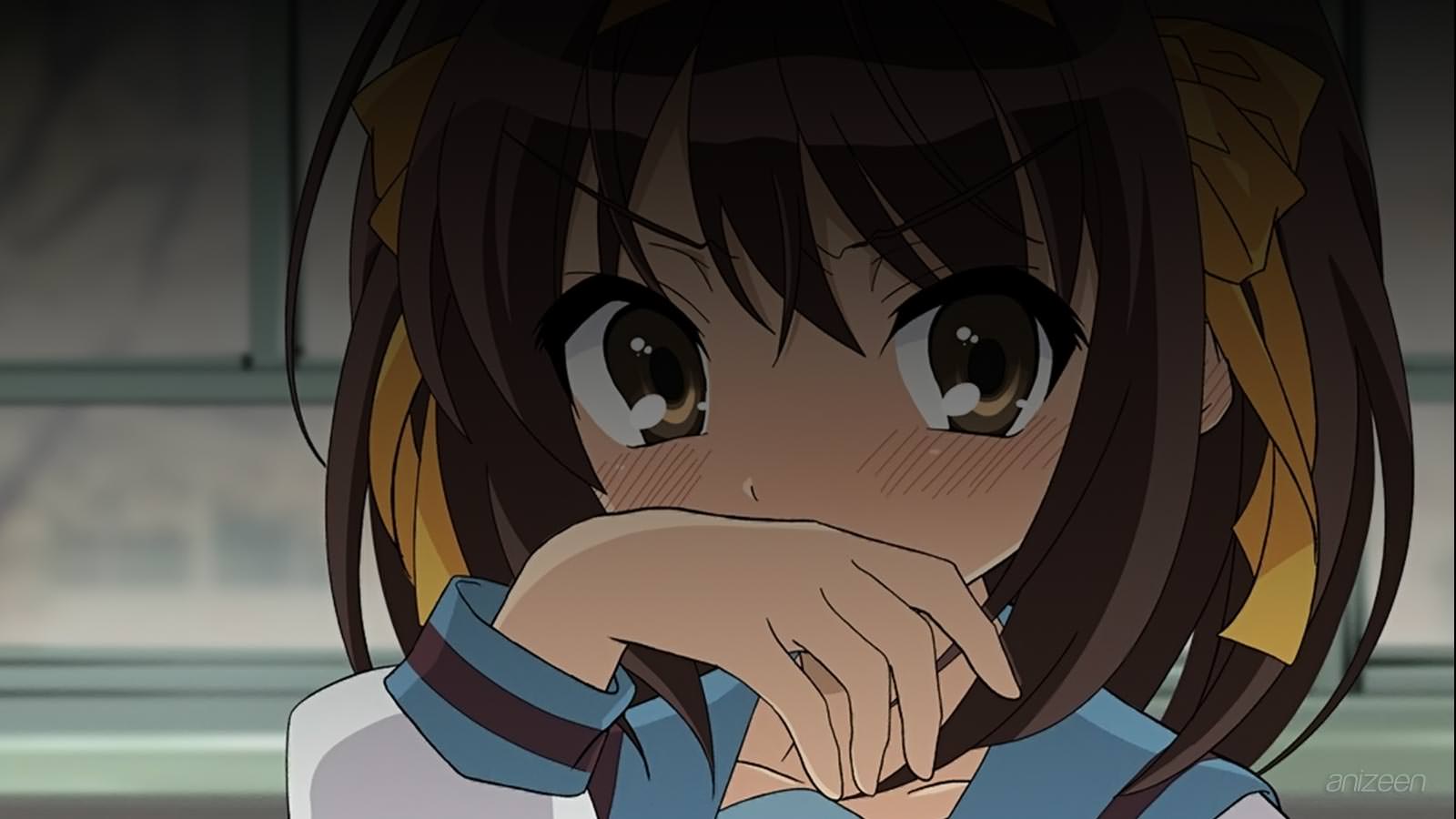 It’s Tanabata, July 7th, and Haruhi wants to celebrate it by having everyone write their wishes for 16 and 25 years in the future. Her reasoning for those lengths is because the two stars that grant the wishes are that many light years away from Earth, so wishes will take that long to reach them.

Of course, Haruhi turns this into a competition to see whose wishes will come true in 16 years. As you think, she asks for incredeible wishes, one for the world to revolve around her and second, for the world to rotate in reverse.

While Haruhi is calm, Mikuru passes Kyon a note asking him to stay late, and he gets another one from Yuki as well as she leaves. He only gets to briefly glance at the latter though before Mikuru reveals that she wants him to go with her back in time to three years ago. Kyon agrees without knowing why they’re going back.

Mikuru sits Kyon down, and the next thing he knows, he’s in the park three years ago with his head on her lap. She had to knock him out because she couldn’t let him see how they time travel, but Mikuru herself then falls asleep. This is because adult Mikuru is also here in this time period, and she can’t let her younger self see her.

Mikuru, in her adult form, directs Kyon to a nearby school and asks him to help someone at the gate. When Kyon reaches the junior high school, he finds a younger Haruhi trying to climb over the gate. As supposed, she immediately makes him help her, Haruhi has prepared some chalk, and she makes Kyon draw on the field with it exactly as she directs, in the process Kyon realizes that he is writting a strange message that Taniguchi once told him about.

The young Haruhi asks Kyon if he believes there are aliens, people from the future, espers, and sliders. Kyon says yes to all except for the final one, and he goes on to tell Haruhi that his name is John Smith and that Mikuru is his narcoleptic sister.

Kyon suddenly remembers the note that Yuki had given him. So, he decides to pay a visit to Yuki’s apartment building. She lets him in after he mentions knowing Haruhi, Yuki mentions that she’s on standby for three more years, and she notes that there is more than one way to travel through time.

Haruhi Suzumiya is the leader of the SOS Brigade, whose energetic and eccentric character proves to be a driving force in nature.

Kyon is a student who unintentionally forms a relationship with Haruhi and is the only normal human in the SOS Brigade. Even though Haruhi is the title character, the story is told through his viewpoint. Through narration and dialogue, he provides his insight, perspective, and opinions on the series’ events.

Yuki Nagato is a humanoid interface created by the Data Integration Thought Entity, whose responsibilities involve monitoring of Haruhi and the investigation of an unexplained “explosion of data” three years prior to the present story. She possesses an ability to manipulate her surrounding environment.

Mikuru Asahina is a time traveler from the distant future who is assigned to investigate the reason behind the inability to travel to any point in time before three years prior to the present story.

Itsuki Koizumi is an esper who, like the other members of “The Agency”, suddenly acquired the power to explore Closed Spaces and combat Celestials three years prior to the present story. Thanks to: randomc

Suzumiya Haruhi no Yuuutsu
(涼宮ハルヒの憂鬱)
Is the general name for a series of light novels written by Nagaru Tanigawa and illustrated by Noizi Ito. The first novel was published in Japan on June 6, 2003 by Kadokawa Shoten, with nine individual novels published and a planned tenth as of April 1, 2007. The story follows the titular character, Haruhi Suzumiya, a young high school girl who can unconsciously change reality, and her strange antics with her school club, the SOS Brigade. Produced by the Japanese animation studio Kyoto Animation and directed by Tatsuya Ishihara, the anime adaption premiered in Japan April 2, 2006 and ran for fourteen episodes. On May 17, 2009, TV Wakayama listed the eighth broadcasted episode of the re-broadcast as a new episode reported to air on May 24, 2009, though it was removed later. The new episode, “Bamboo Leaf Rhapsody”, was aired on May 21, 2009. Unlike the original run, the re-broadcast is shown in chronological order, with new episodes intermixed with the old ones.
OP
S1. “Super Driver” ~ Aya Hirano ep 12-22
ED
S1. “Tomare” Hirano Aya, Chihara Minori, Gotou Yuuko ep 8,12-18,20-23.
WEB