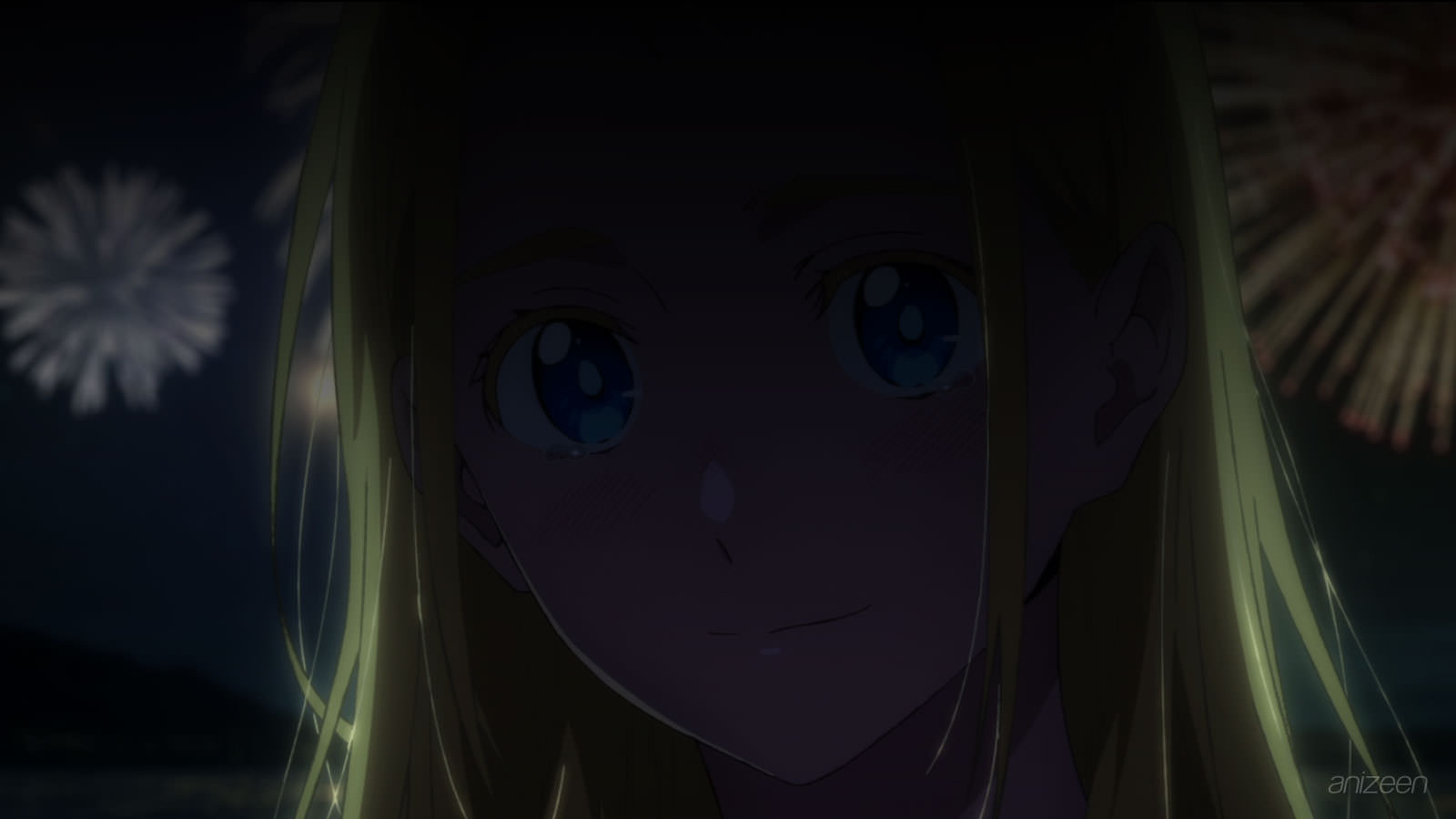 Informed of Ushio’s sudden death, Shinpei moves back to his home in Wakayama City, Hitogashima.

After the death of his parents, Ushio’s family took care of Shinpei, and today he feels like he has lost more than a friend.

At his arrival, he gets off the boat and is greeted by Mio, Ushio’s younger sister, who comes down riding her bike from the top of the island and pounces uncontrollably towards Shinpei, fortunately she doesn’t get hurt, but ends up soaked when she falls from the pier into the ocean.

Shinpei helps her out and then they walk together to the place where Ushio’s funeral is taking place. There, he hears all kinds of rumors, including that Sou’s father, a childhood friend of theirs, performed an autopsy on the young woman.

Shinpei doesn’t understand why they would do that; Ushio was supposed to have drowned while she was trying to save a little girl. At that moment, a light and a sound surprised everyone, it seemed that someone took a picture.

The service is finally over and Shinpei decides to cook Ushio’s favorite dish to share with his adoptive family.

Later, Mio appears crying in her room, and tells Shinpei that she will not be able to forgive the one who killed her sister, which alarms the young man.

Meanwhile, outside his house Officer Tetsu is seen making his usual round, and in the corner of the street he greets Mio, who is supposed to be upstairs, chatting with Shinpei.

The next day, as they help tend the restaurant of Alain, Ushio and Mio’s father, Tetsu arrives to have breakfast.

For some reason, he comments that the family of the girl Ushio tried to save has disappeared from the island, which surprises Mio, and she runs out of the place without a word.

Shinpei decides to follow and finds her in front of the business that belonged to that family. At that moment, Mio tells Shinpei that something strange is happening on the island, and that she is almost certain that a person identical to her sister was the one who killed her.

At that moment, Shinpei remembers an old story that was told to him when he was a child. A man appears walking down the street and tells them that it is not a story, but a disease that has affected the inhabitants of the city for generations.

And he tells them that whoever sees its double, or shadow, always loses his or her life. But also, in one of the temples, a priest usually helps the sick.

Thus, Shinpei and Mio decide to visit the temple to look for the family that has disappeared, however, they are surprised by someone else.

Entering in the jungle, the young listen to the shot of a firearm. Instead of running away, they decide to check what happened and they discover Hizuru, a mysterious woman with whom Shinpei traveled to the island, injured and bleeding.

Despite her surprise, Mio decides to call for help and tells Shinpei to take care of the woman. As he approaches Hizuru, she tries to communicate something to him, but is suddenly shot in the head.

And as he turns around, Shinpei sees Mio threatened by her shadow, who ends up with their lives in an instant.

Then, we see Shinpei waking up again inside the ship he was traveling on, and Hizuru without any injuries.

For some reason, Shinpei has returned to the day of Ushio’s funeral, and begins to remember what he already experienced.

The mystery and suspense are just beginning.