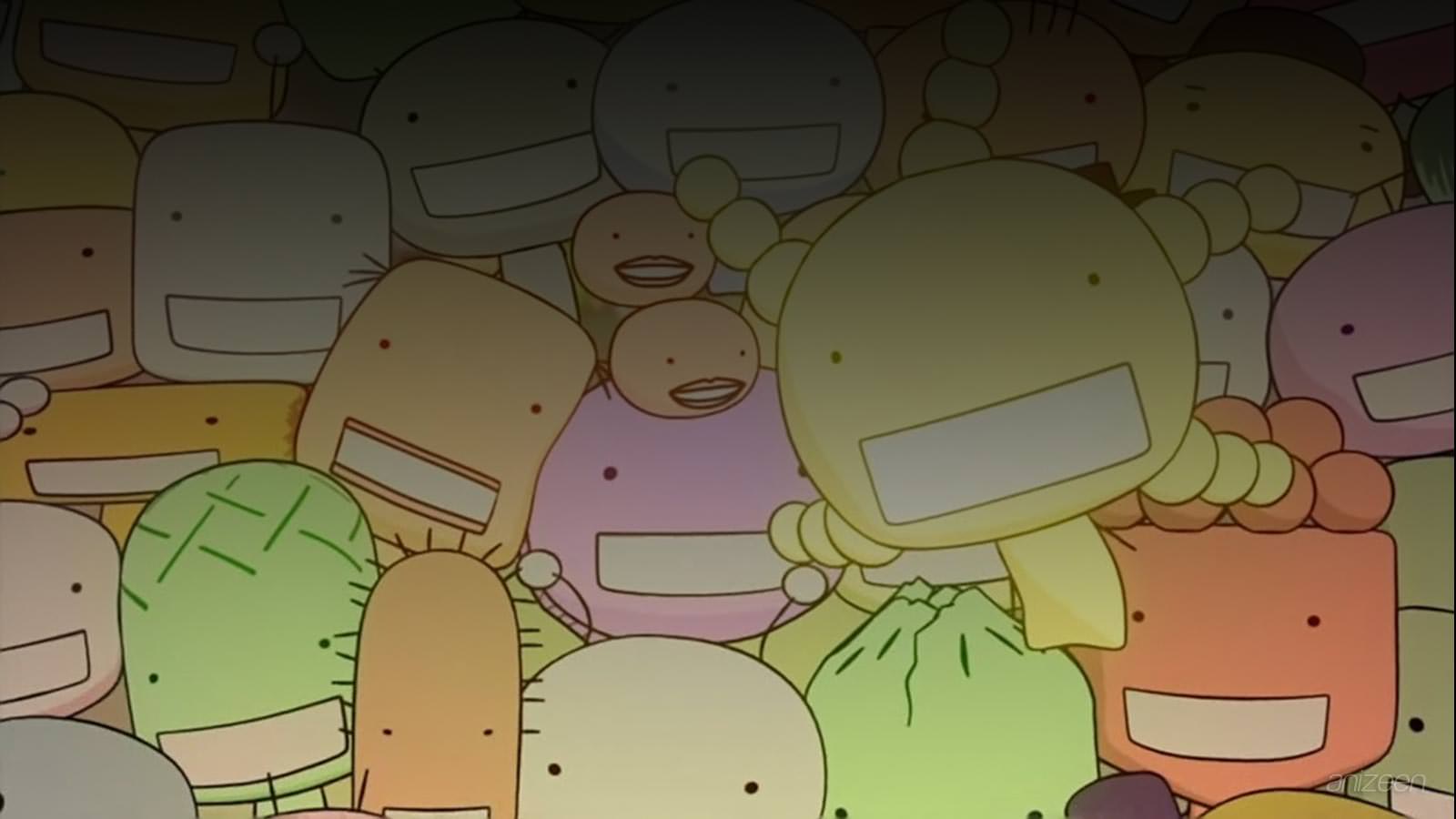 Moyashimon is a college life comedy about a first year agriculture student named Tadayasu Sawaki, who happens to be able to see microorganisms with his bare eyes. But he doesn’t see them as in photomicrographs, but as small, usually friendly blobby creatures that speak with him.

On Sawaki’s first day at an agricultural college in Tokyo, he and his friend and fellow student Kei Yuuki are wondering why there are so many police at the university. Sawaki is from a small rural town so he assumes that this is just another Big City Thing. But the police are there because a female graduate student has gone missing, and foul play is suspected.

Sawaki and Yuuki wander through the surprisingly rural campus looking for the professor who will be their advisor. Sawaki suddenly starts to see bacteria from decomposition floating through the air, which leads them to a clearing in the woods where there are some rocks over a spot that is spewing out huge quantities of microbes and some very bad smells. There is also a wooden stake in the ground that has the name Hasegawa written on it. That is the name of the missing graduate student.

The police are called and are very suspicious because the area from which the smells are coming from is the right size for a human grave. Suddenly a strange old man in a white lab coat comes up with a shovel, goes right past the police tapes, and starts to dig at the burial site. The smell becomes almost intolerable as the old man uncovers a gray sack that has the vague form of a human body. But when he opens the sack, inside are a number of decaying birds.

The old man takes out one of the decaying birds, bites into it, and declares it to be delicious, to the horror of all the onlookers. He then goes up to Sawaki and Yuuki and greets them – the old man is actually their Advisor, Professor Itsuki. At that moment a tall, attractive young woman dressed in skimpy leather biker/club gear shows up and starts to yell at Professor Itsuki for messing up her experiment. Sure enough, it is Hasegawa the missing graduate student, who was just off with friends while her experiment “ripened”.

Hasegawa can’t believe that Sawaki can “see” and “touch” microbes, but no matter which microbial sample colony she brings to him, Sawaki can tell what it is, even to the difference between “native” bacteria in a local yogurt from those in a foreign one.

Tadayasu Souemon Sawaki is the main protagonist, attends an agricultural university in Tokyo as a freshman. His middle name is the yagou of his family home; it is usually omitted, and he is called “Tadayasu Sawaki”. He is a childhood friend of Kei Yuuki and his parents run a supplier of yeast starters. He is able to see and communicate with micro-organisms and bacteria.

Kei Yuuki is a childhood friend of Sawaki and a freshmen like him. His parents run a sake brewery.

Keizou Itsuki is a professor at the university and an acquaintace of Sawaki’s family who knows of his ability. His age is a mystery, but there are reports of his works back to World War II.

Haruka Hasegawa is a postgraduate student. She wears a lab coat over skimpy, bondage-style clothing. She is a violent, somewhat sadistic woman from a wealthy, over-protective family.

Hazuki Oikawa is a freshman at the same agricultural university like Sawaki and Kei. She is a compulsive neat freak and always carries disinfectant tissues and antibacterial spray with her.

Kaoru Misato is a sophomore who tries to use his knowledge of bacteria to earn easy money, who becomes friends with Sawaki.

Aoi Mutou has the unofficial title of “Miss Agriculture” due to her beauty, Mutou is also an assistant to Itsuki and Hasegawa. She is also president of the UFO club.

Moyashimon
(もやしもん)
Is a manga series by Masayuki Ishikawa with a TV anime adaptation directed by Yuichiro Yano. The series follows Tadayasu Sawaki, a first-year college student at an agricultural university, who has a unique ability to see and communicate with micro-organisms and bacteria.
OP
1. “Curriculum” ~ Sarasa Ifu
ED
1. “Rocket” ~ POLYSICS
WEB