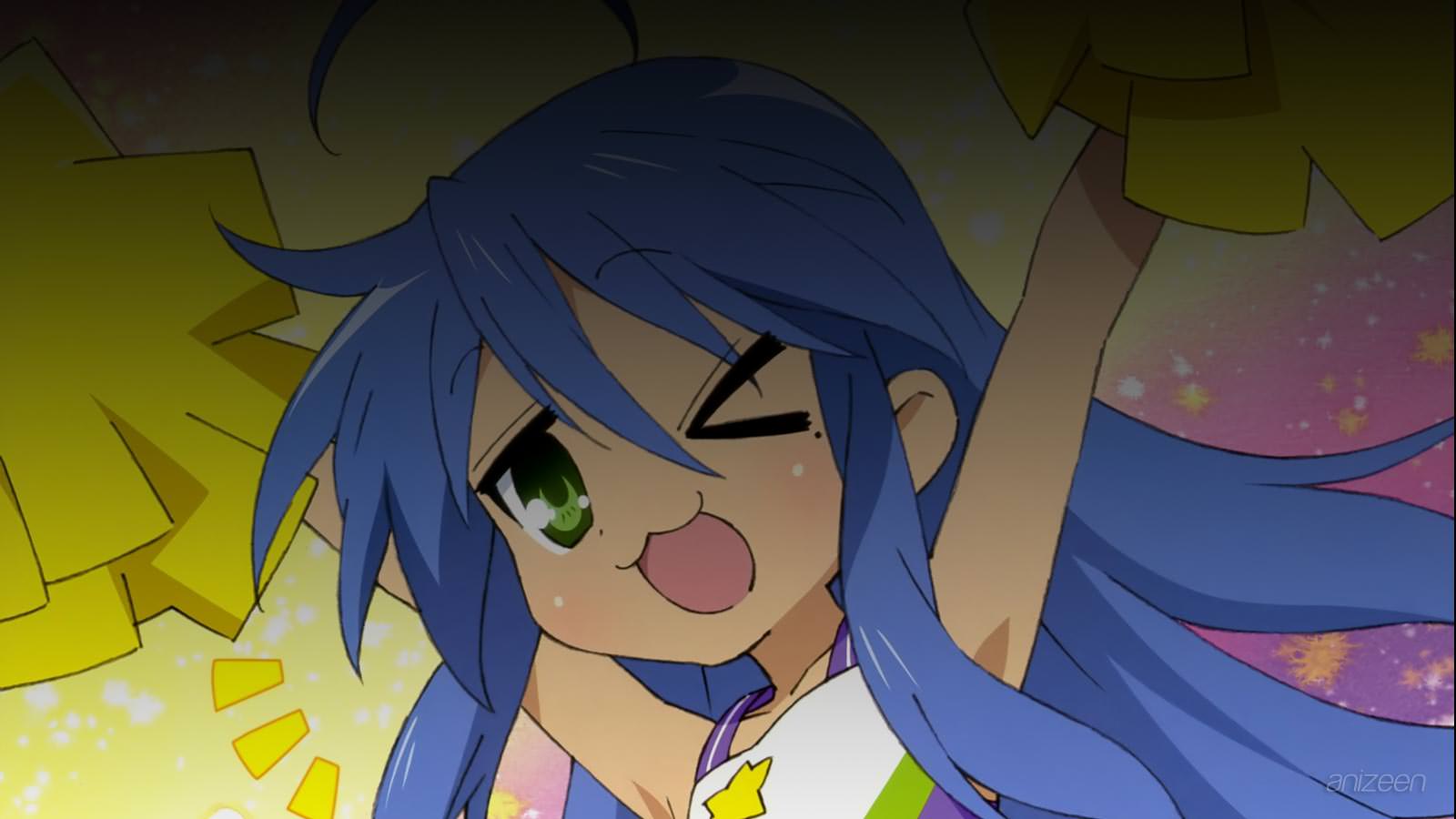 The main heroine is Konata Izumi, an athletic and intelligent girl who, despite these attributes, is not in a sports club, and her grades remain low. Her laziness at school is due to her love for anime and video games and lack of interest in anything else.

The serialization began with the four main characters in their first year of high school: Konata Izumi, Kagami Hiiragi, Tsukasa Hiiragi, and Miyuki Takara. As the story progresses, they move onto their second and third year.

Konata Izumi, nicknamed “Kona-chan” ~ her friends, gets bored easily when something does not interest her. She can be smart, but she hates studying so her grades are a bit uneasy. However, she is an expert in pulling an “all-nighter” to study before a test. In contrast to her studying habits, she loves video games to the extent that she can compete against Kagami on knowledge of games. In addition to video games, she loves anime which is due to her father’s influence along with the games. Her father buys adult games for himself, so she is able to play and enjoy them as well. In fact, when she became eighteen, Konata was overjoyed since she could now go buy and play adult games legally.

Tsukasa Hiiragi, is the younger fraternal twin sister of Kagami, and lives in a six-member family household with her parents. She is in the same class as Konata though is not good at studying or at sports, but excels in cooking and is portrayed as a stereotypical clumsy person with a friendly disposition.

Kagami Hiiragi, is the older fraternal twin sister of Tsukasa. In school, her grades are excellent as she studies very hard. She was even the class president of her class in her first year. She is in a different class than Konata and Tsukasa, but she frequently comes to their class during lunch time to eat with them. Additionally, Kagami chose the humanities course in her second year so that she could be with her friends, but she was the only one separated into a different classroom; the same occurred in her third year. Kagami, seldomly referred to as “Kagamin“, is a bit egotistic, and is somewhat weak in cooking.

Miyuki Takara is a young lady from a wealthy family who is beautiful, smart, and well-mannered. She was the president for her grade level in her first year when she became great friends with Kagami. Now Miyuki is the same class as Konata and Tsukasa. She seldom is a victim of her teacher Nanako’s fists for going along with Konata (in sharp contrast to the large bump on the head that Konata received from Nanako). Miyuki is more relied on by her classmates in helping their studies than Nanako.

Lucky ☆ Star
(らき☆すた)
Is a Japanese four-panel comic strip by Kagami Yoshimizu. The strip has been serialized in Kadokawa Shoten’s Comptiq magazine since January 2004. Cameo strips were published in other magazines such as Shonen Ace and others. It wasn’t originally meant to be serialized, but when Comptiq suddenly had pages to fill, Lucky ☆ Star was there. As it was popular, it was decided that the strip was to be serialized. Like many yonkoma comic strips, it has no real plot, and typically focuses on the daily lives of the characters. However, the strip has become much more popular than expected. On August 24, 2005, a drama CD was released, and on December 1, 2005, a Nintendo DS video game entitled Lucky ☆ Star Moe Drill, was released. A sequel, with the title of Shin Lucky ☆ Star Moe Drill is planned for a Nintendo DS release on May 24, 2007. In September 2006, it was released to the press that Kyoto Animation will be animating the anime based on the series; it will contain twenty-four episodes. The first episode aired on April 8, 2007.
OP
1. “Motteke! Sailor Fuku” ~ Aya Hirano, Emiri Katou, Kaori Fukuhara and Aya Endo
ED
1. “Each episode has a different song from a classic anime show.
WEB