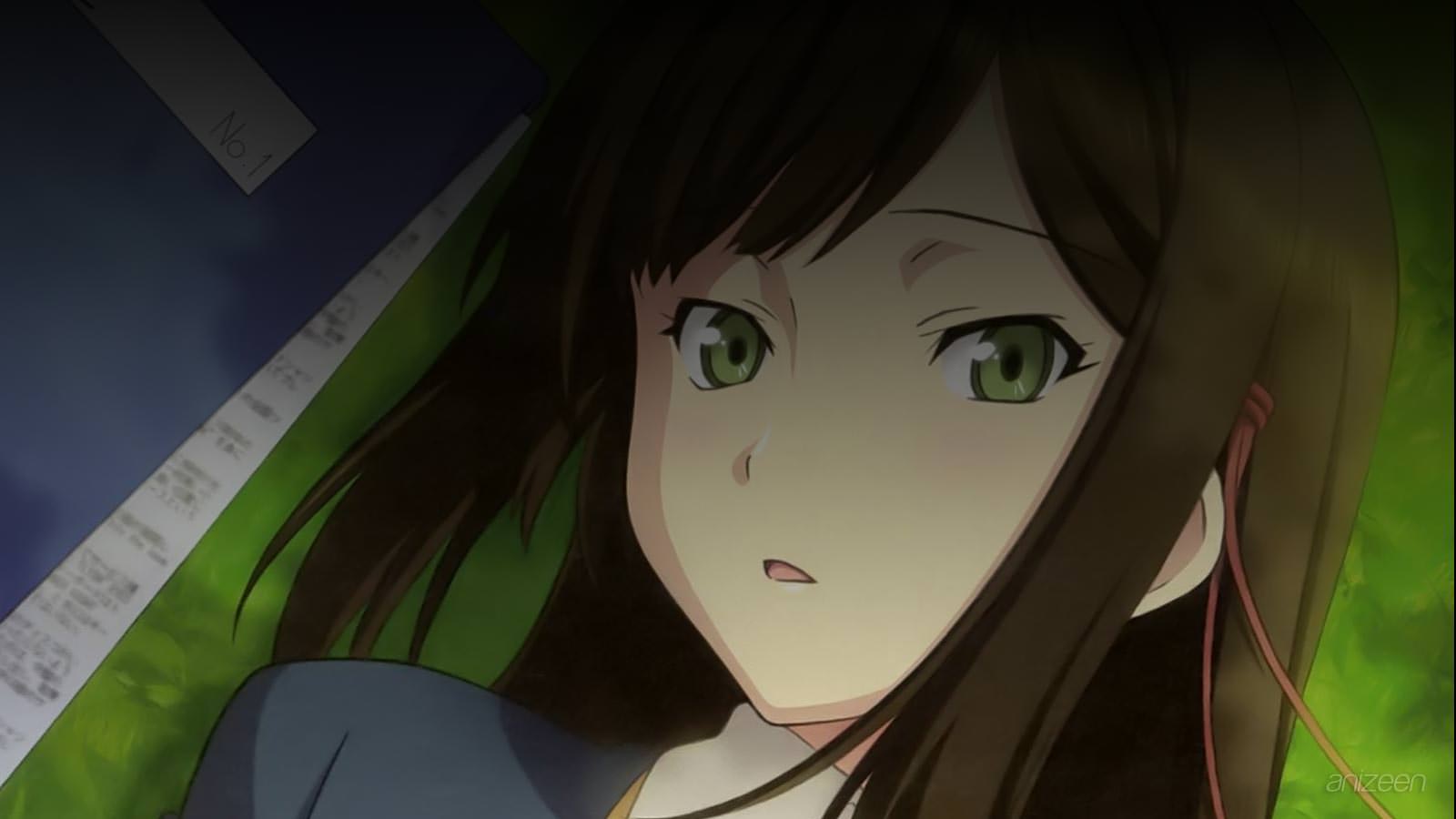 Something suspicious is happening in the middle of the night, someone stays still and tolerates the cold weather waiting.

Suddenly, it starts to happen, someone takes some papers out of a briefcase and delivers them, in return, a huge amount of money seems to be exchanged. Kana Ougibashi, who is investigating anomalies involving the general affairs committee, takes multiple photos as evidence and begins to think what will happen if the photos are published.

Unfortunately for her, someone else is also waiting, she drives an electric car, so the noise is minimal, at the end of the transaction she doesn’t hesitate and hits the camera girl with the car, after that, she destroys the photo evidence.

The next morning, life continues as usual and Yuuki Oojima is sleeping soundly without any worries. He attends Takafuji Private Academy and is a member of the Food Research Club, also known as ‘Shokken’, along with seven others, including his childhood friend Chisato Sumiyoshi, who lives next door and usually comes to wake up Yuuki.

The day begins and both, Yuuki and Chisato find Mifuyu Kiba waiting for them in the street. They have all been close friends since childhood and are all part of Shokken.

To their surprise, the first thing they find when entering the Club is Michiru Morishita bending over in the floor. She is a quiet girl, with not many things to say, but is part of Shokken and happy about it, even though she doesn’t smile much.

Everybody gathers in the Club, including Hazuki Shinonome, a teacher and the adviser of the Food Research Club, who is a drunkard that keeps her own beer keg in the club and would often drop by to have a mug or two.

The Food Research Club is quite peculiar; they test new inventions or taste new and known sweets. Because of this, they spend quite an amount of money, and the student council is aware of it.

At Takafuji, it’s election time, and the student council is preparing for the event. Satsuki Shinomome is part of it and aspires to become the new president. She is the little sister of Hazuki, but she has a though attitude and is quite stubborn when she makes up her mind.

At this moment, she is preparing her campaign and is proposing to get rid of those clubs that spend money and don’t bring any good to the school, and the Food Research Club is the perfect example.

First, the Shokken members think they should support another candidate, but they are all week compared to Satsuki. As the club’s adviser, and because she doesn’t want to lose her personal pub, Hazuki tells them not to hesitate and launch a campaign on their own.

Now, everybody is clear on their objective, in order to save the Food Research Club, they must beat Satsuki in the student council elections, and Yuuki will be the candidate.

Yuuki Oojima is a second-year student at Takafuji Academy, who lives in an apartment with his mother. His father died when he was a child. He is a member of Shokken. He is a carefree kind of guy, but one day he has to step up and fight to save Shokken.

Chisato Sumiyoshi is a second-year student at Takafuji Academy and is Yuki’s childhood friend. She is the president of Shokken. She does not like chocolate due to an event which she experienced before.

Isara Aomi is a first-year student. She lives with her mother and two younger brothers. She works at a fast food restaurant because her family is poor, and is bullied by the wealthier students constantly, both physically and verbally.

Michiru Morishita is a first-year student and Isara’s classmate. She is a newcomer who joined Shokken just before the student council election. She lives in the student dormitory because her home is far from Takafuji Academy. She is generally very quiet, only speaking a few words to express her thoughts, and almost never smiles.

Mifuyu Kiba is a second-year student. She is Yuki’s classmate and is a member of Shokken. She is actually one year older than Yuki since she had to repeat the same class due to an illness before she saw Yuki for the first time. She is from Hokkaido.

Satsuki Shinonome is a second-year student. She is in the student council and is the head of the financial affairs department. She is a wise girl and is a strong candidate in the next student council president election. Her family manages a wagashi shop.

Koi to Senkyo to Chocolate
(恋と選挙とチョコレート)
Also known as Koichoco, is a adult visual novel developed by Sprite, and it was released in Japan on October 29, 2010. There have been two manga adaptations based on the game: one each serialized in ASCII Media Works’ Dengeki G’s Magazine and Dengeki Daioh. An anime adaptation produced by AIC Build and directed by Touru Kitahata began airing on July 7, 2012.
OP
S1. “Signal Graph” ~ Annabel
ED
S1. “Kaze no Naka no Primrose” ~ Ceui
WEB

ED ~ Kaze no Naka no Primrose