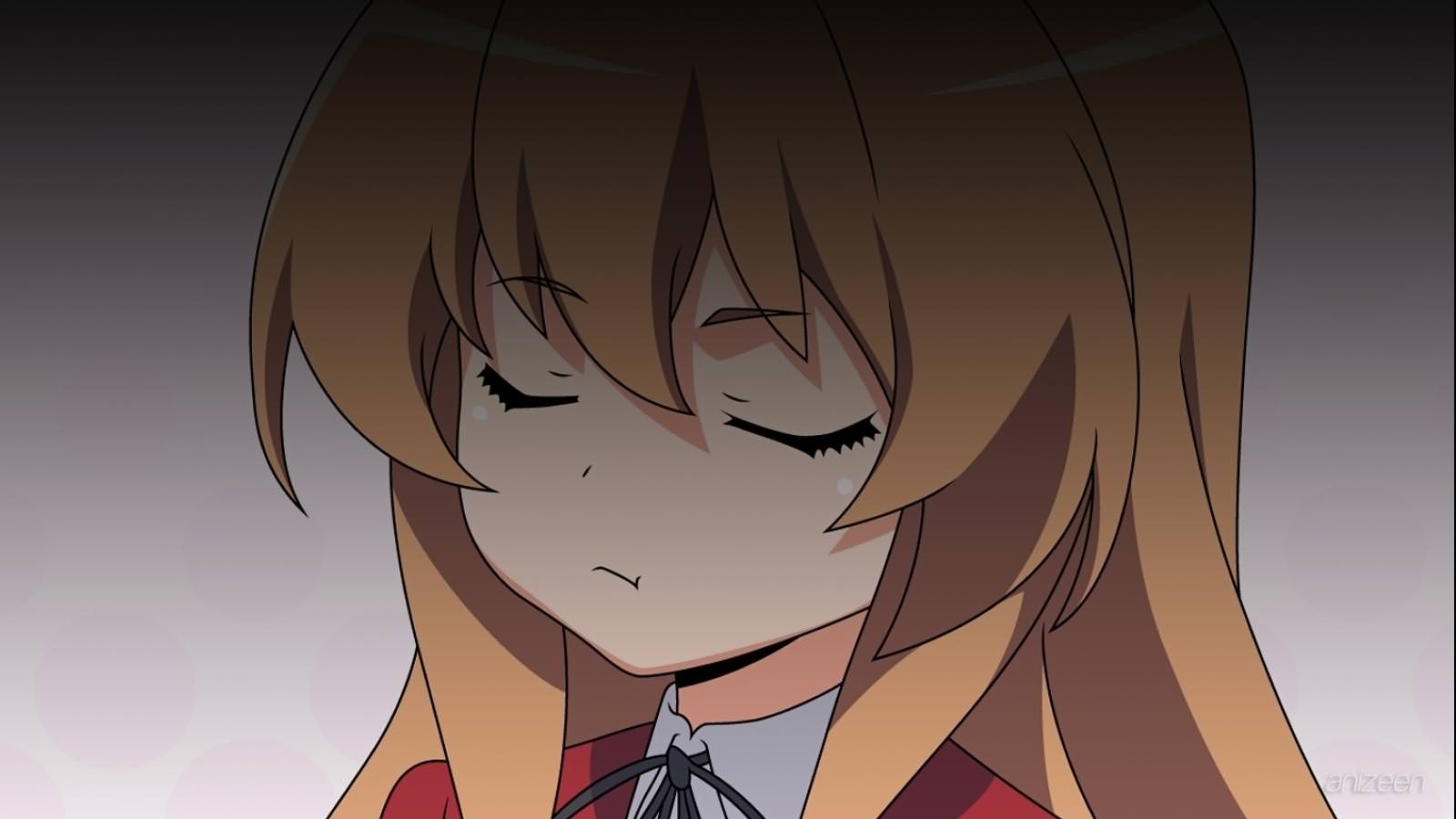 Ryuuji Takasu who is frustrated at trying to look his best as he enters his second year of high school. Despite his gentle personality, his eyes make him look like an intimidating delinquent so he is utterly hopeless about his chances of getting a girlfriend anytime soon, and does not have many close friends either.

After being greeted by his hungover mother in the morning, Ryuuji goes to school and is happy to find that he gets to be in the same class as his best friend Yuusaku Kitamura and crush Minori Kushieda. However, it is then that he unexpectedly knocks into “the school’s most dangerous animal of the highest risk level”—Taiga Aisaka—who just happens to also be in his class, and is a good friend of Minori.

Taiga has a negative attitude towards others and will not hesitate to snap at people. After meeting Ryuuji, she takes an instant dislike of him. Taiga comes from a rich family, though she moved out to live on her own due to family issues, and by coincidence is now living in an apartment next door to Ryuuji. After Ryuuji discovers that Taiga has a crush on Yuusaku, and Taiga finds out about Ryuuji’s affections towards Minori, Ryuuji suggests that they cooperate so they can win the object of their affections.

Ryuuji says he will do anything to get closer to Minori, which Taiga exploits, making Ryuuji her personal servant, and getting him to do household chores like cooking and cleaning for her. Taiga spends a lot of her time over at his house, so much so that she could almost be considered a member of his family. Since Ryuuji spends a lot of time with Taiga, he is opened up to her world and to a side of her that most people do not see.

The two also attempt to help each other in order to improve how people view them. Unknown to them, however, people they know from school start to become curious about their strange relationship together and rumors begin to spread about them.

Ryuuji Takasu is a sixteen-year-old high school student in his second year, class C. Due to biological inheritance, his eyes make him look like an intimidating delinquent and causes many misunderstandings in his life. He lives in a fatherless family with just his mother, and due to this, Ryuuji has learned to be self-sufficient. He is good at cooking and keeping everything in his house clean, and also excels at sewing. He holds a crush on Minori Kushieda, a girl his age in his class. He has a pet parakeet named “Inko-chan”.

Taiga Aisaka is a girl in Ryuuji’s class. She has a well-regulated and beautiful appearance though is unable to stomach company from others. Due to her often snapping at others in brutal ways and her short stature, she is given the nickname “Palmtop Tiger”. Her under-developed body and the added nickname has given her a complex which in turn serves to give her a negative attitude and facial expression. Essentially, Taiga gets upset easily and is considerably clumsy. Due to her cute looks, she often gets confessions by boys her age, but she turns down every one of them.

Minori Kushieda is a girl in Ryuuji’s class, and is a close friend to Taiga. She is also known by the pet name “Minorin”. In contrast to the negative Taiga, Minori is always smiling and cheerful, but is also a natural airhead. She is very athletic and is the captain of the girl’s softball club at school, though at the same time she holds many part time jobs. She is a glutton when it comes to food, but is also constantly combating with dieting.

Yuusaku Kitamura is a male student in Ryuuji’s class, and is his best friend. He is the vice-president of the student council, the class representative, and captain of the boy’s softball club at school. Yuusaku wears glasses, and has a diligent personality. He thinks he is poor at talking to girls, though Ryuuji observes otherwise; Yuusaku likes the student council president Sumire Kanou. Despite being on the student council, he is in violation of riding a motorcycle to school.

Yasuko Takasu is Ryuuji’s thirty-three-year-old mother, though she refers to herself as eternally twenty-three; she has large, F-cup-sized breasts. Soon after Ryuuji was born, her husband died which left her to raise her son by herself. She works at a hostess bar named Bishamonten Kuni where she goes by the name “Mirano”, and single-handedly supports her two-member family financially.

Ami Kawashima is Yuusaku’s childhood friend who transfers into his class midway through their second year of high school. She is very beautiful and even works as a model, though after she transfers school, she temporarily stops modeling. However, she still continues to go to the gym readily and maintains a slim figure. She is always kind and generous towards others, though this is merely a deception.

Yuri Koigakubo is the twenty-nine-year-old homeroom teacher of Ryuuji’s class, though she turns thirty in the fifth volume of the light novels. She likes to do things at her own pace and is timid towards Taiga’s way of speaking out. Since her twenties are almost over, Yuri is in a hurry to get married soon and she even tries to dress well so as to be able to get into a relationship quicker.

Sumire Kanou is the student council president and always manages to get the top grades in school; she is in fact a scholarship student and has horrible eyesight. She has a strong-minded personality which she depends on to be a figure those will follow. Her younger sister is Sakura and her parents own a supermarket. Sumire likes Yuusaku and as a result is the object of an one-sided hostility from Taiga.

Toradora!
(とらドラ!)
Is a Japanese light novel series by Yuyuko Takemiya, with illustrations by Yasu. The first novel was released on March 10, 2006, and as of August 10, 2008, eight volumes have been published by ASCII Media Works under their Dengeki Bunko label. A single spin-off light novel was also created aptly titled Toradora Spin-off! and was released on May 10, 2007. A manga adaptation by Zekkyou started serialization in the shounen manga magazine Dengeki Comic Gao! on July 27, 2007, formally published by MediaWorks. The manga ended serialization in Dengeki Comic Gao! on January 27, 2008, but continued serialization in ASCII Media Works’ manga magazine Dengeki Daioh on March 21, 2008. An anime adaptation produced by J.C.Staff started airing in Japan on TV Tokyo on October 2, 2008.
OP
S1. “Pre-Parade” ~ Rie Kugimiya, Eri Kitamura, and Yui Horie
ED
S1. “Vanilla Salt” ~ Yui Horie
WEB