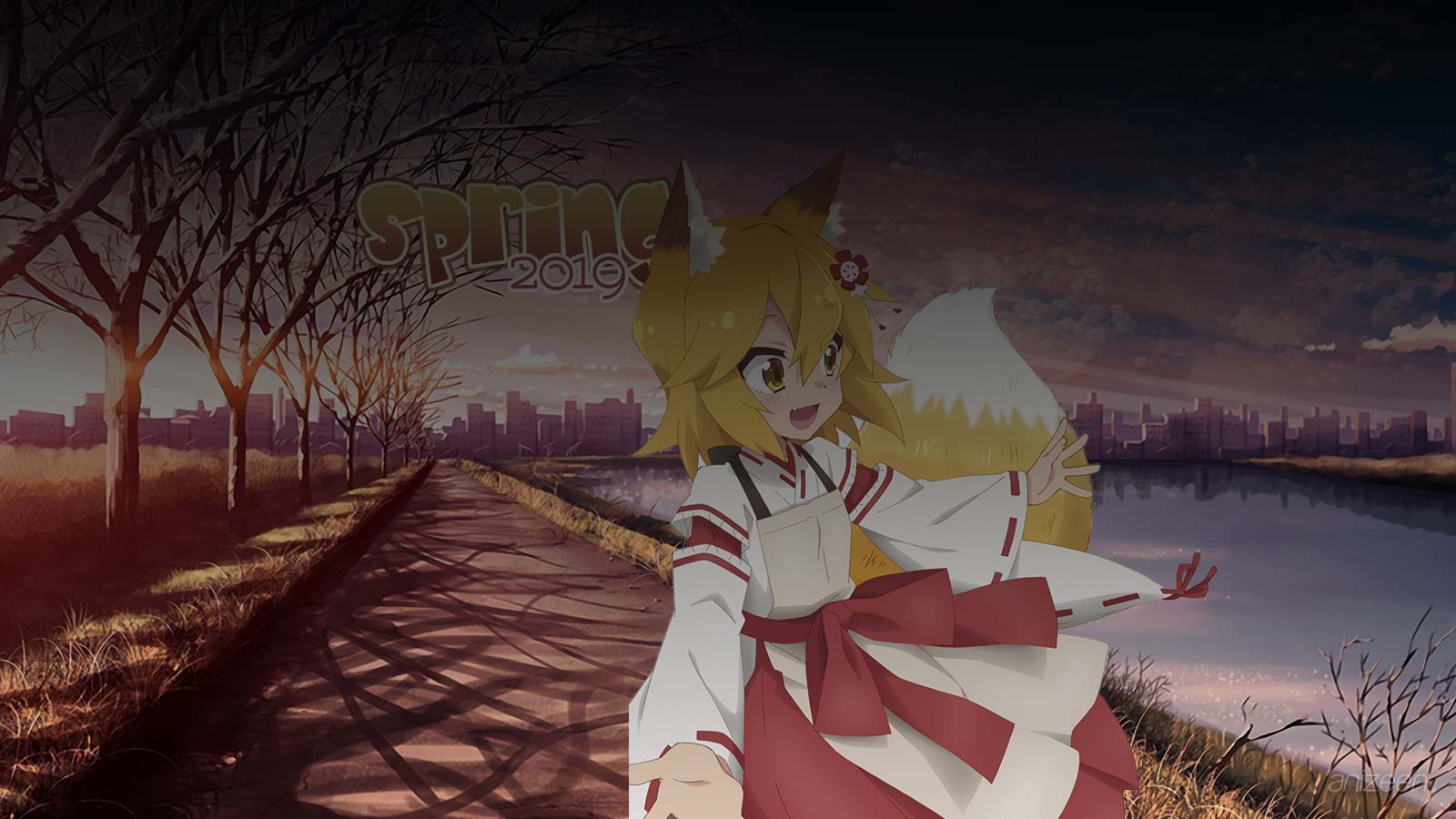 The past months, all I could think was to find a way to stay calm, as I said months ago, there are so many distractions in our chaotic world. In addition, I guess I am growing older, that is a fact, and I will stay apart of troubles… maybe that is why I want to find balance in my life, and certainly, I wish the same to you all.

After this, let us focus on the Spring Anime Season 2019? For some reason, I have a feeling it will be a good one, with several new series, nice character designs, and fortunately, good plots to follow.

Meet Nakano, a working person, immerse in a toxic corporate environment. In Sewayaki Kitsune no Senko-san, one day he arrives home after a disastrous day, as soon as he enters, he apologises an exits. He thinks he has entered the wrong apartmet, however, once calm, he sees an 800-year-old fox girl, preparing dinner. For some reason, she intends to live at Nakano’s, and begins to cook, clean, and calm his exhausted caregiver.

Meanwhile, in a world where fairies are used to possess and reside inside animals, humans begin to transplant organs from those animals into them. After that, they can partially summon the fairy and use their powers as weapons. In Fairy Gone, after a violent war, the “Fairy Soldiers” have lost their purpose, and now they must reintegrate into society.

Back in our time, Hitori suffers from extreme social anxiety; she is shy, and unable to talk to strangers. In Hitoribocchi no Marumaru Seikatsu, she decides to change her life, and entering middle school is the beginning, and becoming friends with her classmates and ambitious objective. However, it will not be easy, she is adept at avoiding people, and her legs tend to cramp and is not rare to see her vomiting when exposed to extreme tension.

Ecchiness seems to be in the air this Spring, and Nobunaga, a middle school teacher has a dream to find love, one day, that girl will appear and confess to him. In Nobunaga-sensei no Osanazuma, Kichou, a 14-year-old girl, proclaims herself as his wife, for some strange reason, she seems to come from a different era, where she was in love with Nobunaga Oda.

If that is not enough for you, in Nande Koko ni Sensei ga!?, Ichirou is an average teenager, however, for a strange reason, he always end up in awkward and perverted situations with his teacher, Kana. Ohh… and please do not forget this is a fiction, do not try this at home, nor school, nor work… or anywhere!

Now, let us find a different kind of series. In Shoumetsu Toshi, a whole city has disappeared, and Yuki is the only survivor. One day, Takuya, a professional courier and loneer, meets her. She has a message from her father, and, together, they will search for him. However, unexpected obstacles will strike the pair, as they face the feelings of those left behind, and unveiling a hidden conspiracy.

If you are still stuck in the “tutor theme” series, in Bokutachi wa Benkyou ga Dekinai, Nariyuki tutors three genius of different subjects in high school to get a scholarship. Fumino excels on literature, however, she is terrible in math, Rizu is a genius on mathematics and science but lacks literature and arts abilities and Uruka is an incredible athlete and a bad student.

Now, take a deep breath, and look into the sky… can you imagin life outside Earth? In Carole & Tuesday, humankind has conquered Mars, and as predicted, AI is in control. Destruction is still far away, and people are content to be just consumers. There we meet Carole, struggling to make a living, and Tuesday, a rich girl. And, they have something in common, music, together, they want to sing, and create.

Then, in a near future, a giant meteorite has collided with earth. All living organisms, including humankind, are gone. However, the government, who had foreseen this outcome, took measures to counter the worst-case scenario. In 7 Seeds, five sets of seven gifted young men and women were selected and placed into teams and put under cryogenic sleep in hopes of preserving the continued existence of mankind.

Finally, a special mention for an old favorite, Fruits Basket (2019) will let us know more about Tooru, a kind hearted orphaned high school student who, found living in a tent by Shigure and Yuki, they offer to take care of her in in exchange for housekeeping. She finds out, they, and the Souma family, have a secret, if touched by the opposite sex, they turn into animals of the Chinese Zodiac. In 2001, a previous anime series told and incomplete story, I hope it will not happen again.

Have a great season!