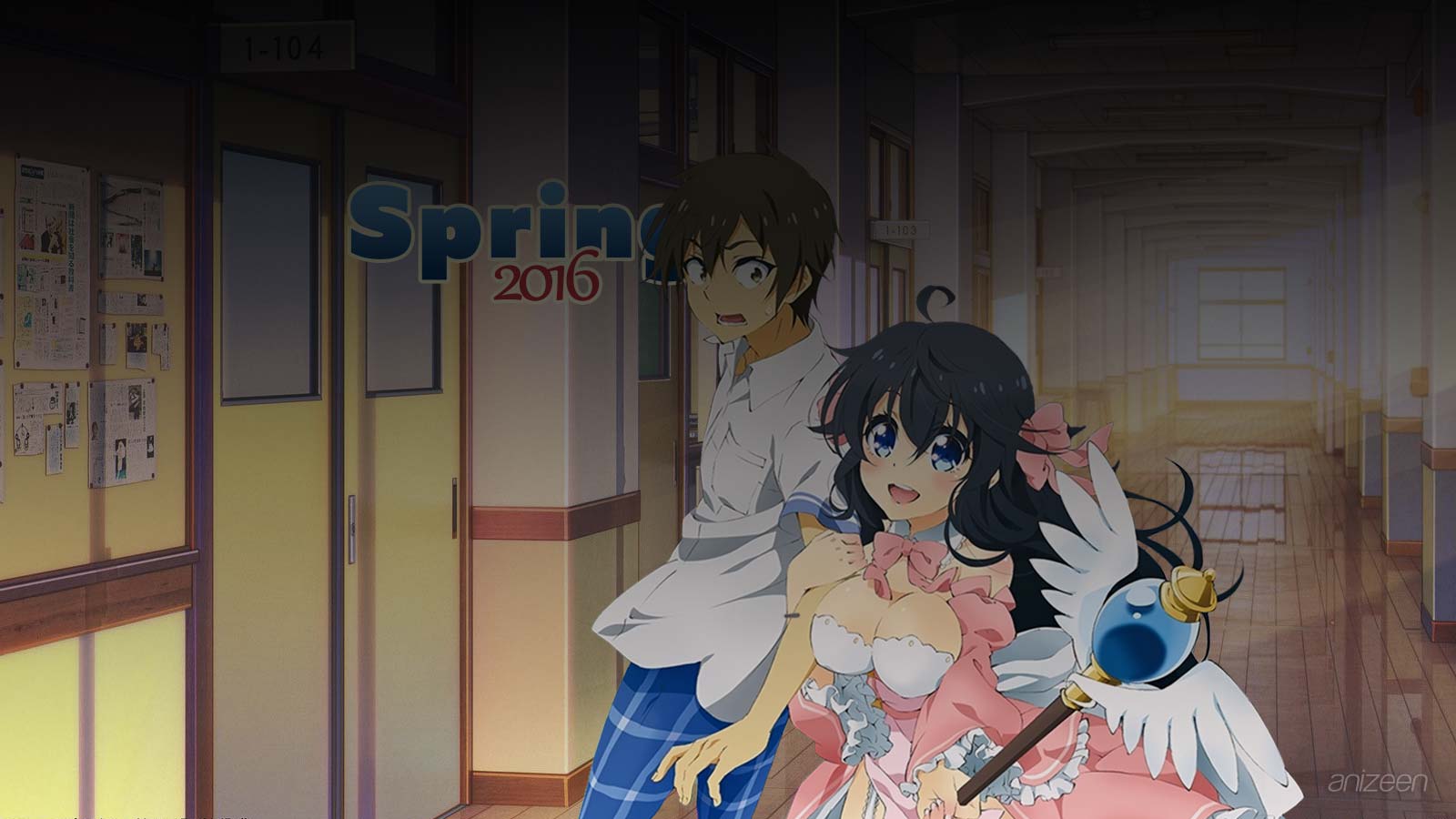 As the weeks go by, we found ourselves closer to the Spring Anime Season 2016. It seems to be a big one, at least in terms of the number of series to be premiered. Actually, there aren’t as many sequels as usual, which means we will find a lot of new characters and stories to follow.

So, let’s start with a constant search for the ideal life we all dream from time to time. In Mayoiga, a group of 30 men and woman begin a journey to find a village called Nanakimura, a place where you could live in utopia, able to escape from this tedious world. They will discover what really lies behind Nanakimura.

And if we think about new findigns, Hideaki has had a rough time. In Netoge no Yome wa Onnanoko ja Nai to Omotta? (header image), a couple years ago, Hideaki fell in love online, and he even had the courage to confess his feelings, just to find out on the other side of a multi-player game, a man. Disappointed, he simply begins to ignore women, specially if they are online gamers. But one day he receives what seems to be a true love confession, and this time it is a real girl -named Ako-. But she is a bit different, and seems to have some troubles distinguishing the game from reality.

Meanwhile, in an alternate world, Subaru is saved by a gorgeous girl named Emilia. In Re:Zero kara Hajimeru Isekai Seikatsu, Subaru wants to return the favor to her savior and stays around wandering for some time. But, stranded in a strange world, they end up being attacked and lose their lives. Subaru wakes up and finds out he has a new ability, unfortunately, this will make him fall in despair, trying to save Emilia from her fate.

In a different story, we find a guy named Kouki, who is supposed to be just a regular student, and he would love to stay that way. Unfortunately for him, in Wagamama High Spec, the student council president of Oosui Academy -Kaoruko- is searching for new male student to join the office, she notices that Kouki is a manga artist. Actually, he publishes on a weekly basis about romance, and Kaoruko, as an illustrator has helped him without even noticing. She decides to use this information to force Kouki to join the council, and after that, only troubles will arise.

If life was this sweet and interesting, we might be happy all the time, right? But that rarely happens, and Atsushi knows about it. In Bungou Stray Dogs, he was kicked out of the orphanage, has no place to go and is just in the brink of starvation. But one day he saves Ozamu, who seems about to commit suicide. He ends up being a detective, part of an agency that takes care of dangerous jobs in the city.

The unknown sometimes is appealing, in order to find the truth, science tries to discover anything. In Kuromukuro, as a dam construction takes place, something unusual and old is discovered. The ancient artifact is completely unknown and important, and complete investigation institute is established around it. Now, Yukina, the daughter of the institute’s head is attending a near high school, and will end up meeting a guy who seems to be a reborn samurai.

And if we think about heroes, in Boku no Hero Academia, Izuku dreams about it every single day. He lives in a world where superpowers are common, also known as Quirks. Unfortunately, Izuku doesn’t have a Quirk, until he meets All Might, the greatest hero of all time. Now, with all this power, he will be able to make his dream come true, and starts attending Yuuei Academy, the top-ranked hero-training high school in Japan.

Now, let’s go onward into the future. In Macross Delta, it is the year 2067, eight years after the Macross Frontier events. As before, a group of talented idols and Valkyrie pilots will get tangled between a never ending battle against evil and the mysterious Aerial Knights, from the Kingdom of Wind.

Back in out era… somehow, we find Machi, a girl who is a shrine maiden in certain mountain in north Japan. In Kumamiko: Girl Meets Bear , Machi will have to prove herself brave enough to attend school in the city. But she is not alone, her guardian is a talking bear named Natsu, who will guide her to accomplish her dream.

Meanwhile, in another world, there are three kingdoms about to clash into a destructive war, but also threatened by a powerful dragon. In Seisen Cerberus: Ryuukoku no Fatalite , Hiiro’s parents faced the dragon to save the world, but the lost their lives in the attempt. Now, Hiiro is determined to avenge his parents’ death by killing the evil dragon known as Danguard.

And, if you had not enough threats to the world, in Hundred, an evil life form known as Savage is attacking, and only a weapon will beat it for good. Hayato wants to wield such weapon and destroy the creature, to do it he enrolls into a marine academy. For some strange reason, he is recognized by his roommate, Emile, and challenged by the most powerful slayer, Claire.

With such evil around, we might need the help of an exorcist such as Rokuro, who comes from a distinguished family who fight such menaces. But there is a little problem, in Sousei no Onmyouji, Rokuro would love to be anything but an exorcist. But one day everything changes, a new exorcist -named Benio- is in town. He begins to compete with her, and without noticing, end up being destined to become the “Twin Star Exorcists”, the ultimate fighters fated to marry and raise the prophesied child who will eliminate all evil in the world.

Finally, if you enjoy specials and movies, I’d say that Yuu Gi Ou: The Dark Side of Dimensions is the most expected one of the season. And I’d add to my list: Garo: Divine Flame, Owari no Seraph OAD and Meitantei Conan: Junkoku no Nightmare.

Let’s have a great Springtime!