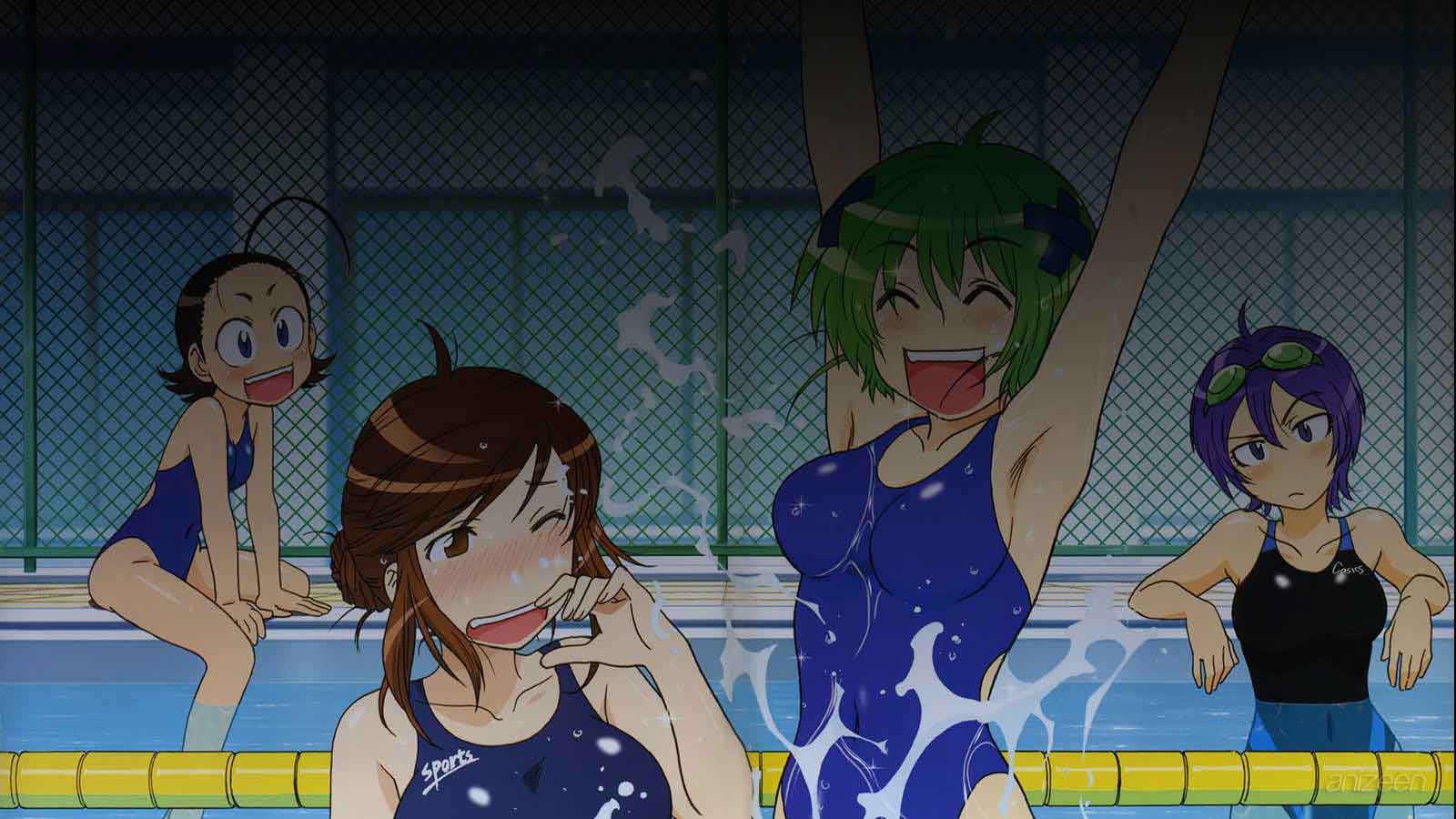 Situated on the island of Itoguchi in Umineko, Kanagawa Prefecture.

Umishou begins with an energetic female transfer student from Okinawa, joining the school and its swimming team, where she meets the team’s manager, Kaname Okiura. Upon meeting Amuro, Kaname feels an attachment to her, as if he had met her previously.

Second year high school student Okiura Kaname manages his high school’s swim team, mainly because he likes to ogle the girls on the swim team. Okiura doesn’t swim himself because as a child he was nearly drowned by what he thought was a mermaid.

One summer day a green-haired girl named Amuro Ninagawa arrives on a houseboat from Okinawa to become a transfer student at Okiura’s school. It turns out that Amuro can also swim like a fish and both she and Okiura think that they’ve met somewhere before.

Amuro Ninagawa is a second year student, and a new transfer student from Okinawa at Umishou. Despite her being a dedicated and skilled swimmer, she finds difficulties in performing at competitions due to her not being used to the rules and environment of professional swimming. Among her other uncommon habits, she prefers swimming nude.

Kaname Okiura is a second year student, and the swimming team’s manager. He had a traumatic experience involving a creature he describes as a mermaid during his childhood, and after which he has been afraid of swimming ever since. However this scenario started to change after Amuro’s arrival at Umishou.

Momoko Orizuka, a third year student, and vice-captain of the swimming team. Just after meeting Amuro, she realizes her hidden potential and recruits her to the swimming team, after challenging her to a match and being impressed with her speed at water.

Maki Ikuta, a first year student, nicknamed Makio. Too small for her age, she is usually confounded with a junior student. Despite being a member of the swimming team, she is still learning how to properly swim by taking lessons from Kaname.

Mirei Shizuoka is a second year, and the swimming team’s backstroke specialist. Admired by the boys because of her generous measures and polite demeanor, few people know of her repressed lustful desires, and that although she appears to be innocent and pure, she usually wears very mature pieces of underwear.

Maaya Nanako, a first year student. A famous swimmer and model who transfers to Umishou in order to get close to Kaname, for whom she has a crush since childhood. Considers Amuro as a rival and competes with her for Kaname’s attention.

Kenkou Zenrakei Suieibu Umishou
(ケンコー全裸系水泳部 ウミショー)
Is a manga series by Mitsuru Hattori, which has been serialized in Kodansha’s Weekly Shounen Magazine from issue 33 since 2005. It has been adapted into a TV anime series, directed by Kouichirou Soutome and written by Mamiko Ikeda, which premiered in on July 3, 2007 on Chiba TV, Tokyo MX, and numerous other UHF television stations. Animated by Artland, it is being directed by Kouichirou Soutome and written by Mamiko Ikeda. What’s it really about? Girls in swimsuits. Girls in wet shirts. Girls in lingerie. Girls with no clothes on at all. And skin, skin, skin.
OP
S1. “DOLPHIN☆JET” ~ Ayane
ED
S1. “Splash BLUE ~ Taiyou to Lemonade” ~ Ayumi Murata
WEB