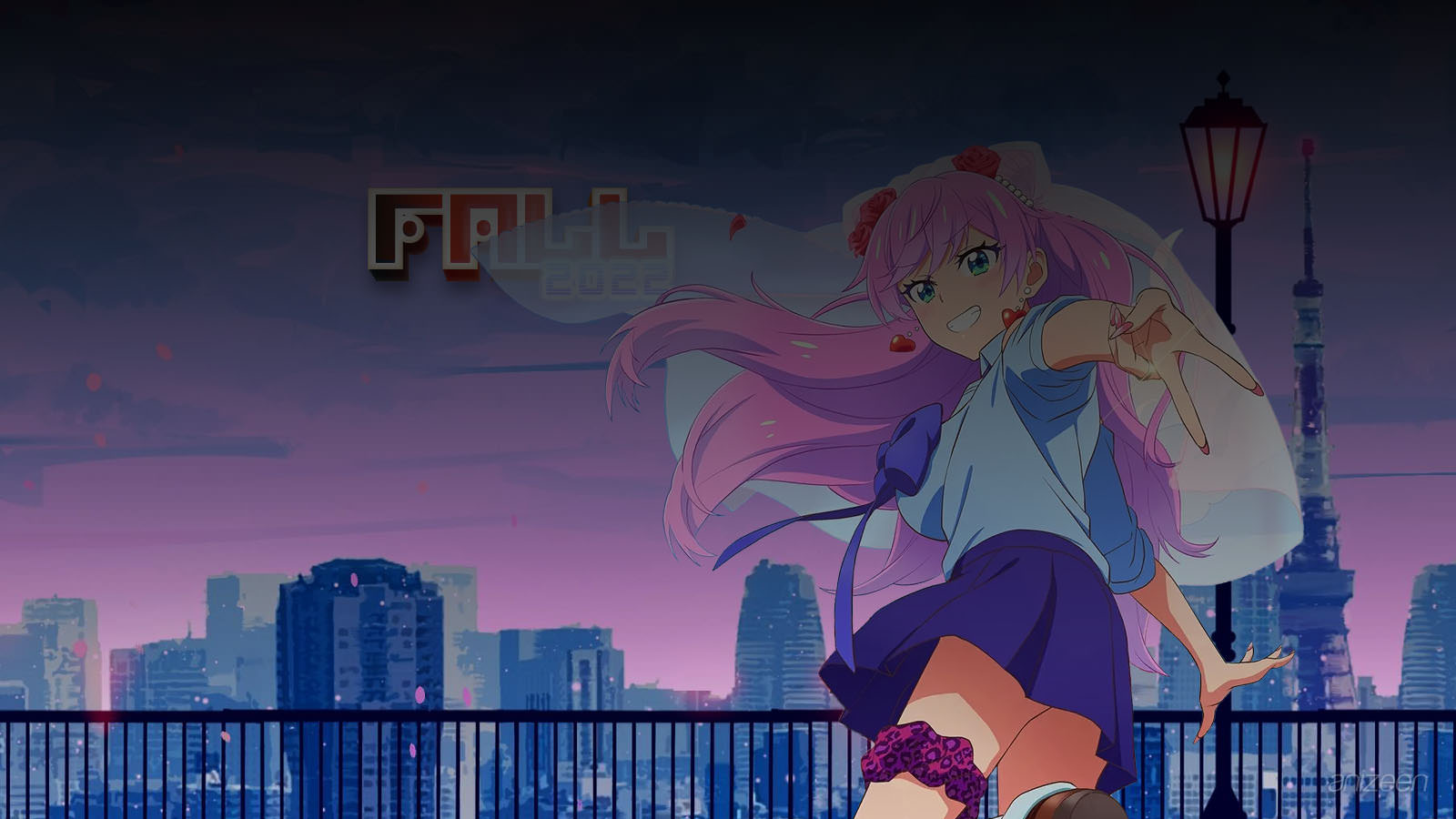 Today, as never before, we live in turbulent and incredible times. We have faced pandemics, economic crises, armed conflicts, and even the death of a historic Queen.

Now, in terms of the Fall Anime Season 2022, the year comes to an end with a clear nod to the past, as successful action series, such as Bleach, or romance, such as Urusei Yatsura, are revived.

But we also have new series, and we start when we meet Jirou, who has been in love with his friend Shiori for a long time, but has not confessed to her. In Fuufu Ijou, Koibito Miman, as a senior in his last year of high school, the school implements a couples training program, but Jirou ends up pairing with Akari, who couldn’t be more different from Jirou’s crush.

Meanwhile, in another reality, we meet an extraordinary hunter named Madan, who feels that he is wasting his youthful years and decides to retire. In Futoku no Guild, before doing so, a guildmate suggests that he accompany Kyan on a quest, and upon doing so, he is surprised to see how she is constantly attacked by all kinds of monsters.

Then, comes Aileen Lauren, a student from the gentry, who is shocked when her fiancé breaks up with her in front of everyone at school. In Akuyaku Reijou nano de Last Boss o Katte Mimashita, at that moment something strange happens and Aileen Lauren discovers that she has been reborn inside a video game, that she is the villain of the story and that at any moment she could die. To avoid her fate, she must look out for the Demon King and force him to fall in love with her.

Still out of our world, someone, who remembers his past life, except his name, reincarnates into a magic sword. In Tensei Shitara Ken Deshita, accepting his fate, he decides to find someone who can bear him and help discover his purpose in this world. One day he runs into a caravan of slave traders and Fran, a slave girl with cat ears, finds the sword and saves everyone from the attack of a beast. She now calls him Master and their adventure begins.

Then, we arrive at a farm, where Al Wayne dreams of a quiet life. In Noumin Kanren no Skill Bakka Agetetara Naze ka Tsuyoku Natta, the young man enhances his skills as a farmer, however at the same time he seems to have maxed out other skills, some of which are the envy of any hero. And although he wishes to dedicate himself to his crops, demons and monsters keep invading the kingdom where his farm is located, so he must intervene or lose his harvest.

And if we talk about heroes, you have to meet Rein, who specializes in taming beasts and forming contracts with them, but his teammates say he is too weak and is expelled from the party. In Yuusha Party o Tsuihou Sareta Beast Tamer, Saikyoushu no Nekomimi Shoujo to Deau, while searching for a job, Rein rescues Kanade who is a member of the powerful cat tribe and they decide to team up. By signing his contract, Rein gains some of Kanade’s powers and abilities.

Back in time, we arrive in Japan’s Taishou era (1912-1926) and meet Mameda, a tanuki with the ability to transform into a human. In Uchi no Shishou wa Shippo ga Nai, Mameda decides to transform and go to the city of Osaka, however, she is immediately discovered and in particular, a beautiful woman named Bunko tells her to return to the place she came from. It turns out that Bunko is also a supernatural creature, and she transforms into a human to perform her comedic act in the city. Mameda begs her to teach her how to behave and not be found out.

And now in our era, Ittoki arrives, an ordinary student who suddenly finds out that he is the 19th heir to the famous Iga Ninjas. In Shinobi no Ittoki, the Iga must defend themselves against the Koga, a rival clan that wants to end Ittoki’s life. Therefore, the young man must learn the art of modern shinobi, protect himself and save his historic village from danger.

Meanwhile, a boy dreams of controlling the power of shadows, but thanks to his imagination ends up losing his life. In Kage no Jitsuryokusha ni Naritakute, upon reincarnation, he starts a new life in a fantasy world under the name of Cid Kagenou, and decides to keep a low profile, but still dreams of manipulating shadows. One day he saves a young girl named Alpha and makes up a fantastic story, telling her that the world is in danger, but claims his secret organization is working to save it. Alpha decides to join and they begin to recruit other members, only to end up involved in a complicated power struggle.

Meanwhile, yet in other world, Sarasa has just graduated from the royal academy of alchemists. In Shinmai Renkinjutsushi no Tenpo Keiei, as a graduation gift from her teachers, the young woman receives her own store, however, its condition is not exactly optimal and she will have a hard time starting to operate. While she obtains ingredients, keeps training and sells her products, Sarasa aspires to live her life in a relaxed way.

Likewise, in a fantastic world, we find Lady Elianna, who discovers her fiancé, Prince Christopher, very affectionate with another noble lady. In Mushikaburi Hime, the young woman confirms the rumors that the prince is in love and imagines that her engagement will end, but that is only the beginning, and a great conspiracy starts to take shape.

Back among us comes Denji, a young man desperate to live in poverty. In Chainsaw Man, Denji runs into a demon named Pochita and decides to sign a contract with him, by merging, he gains the terrifying ability to turn parts of his body into chainsaws. Eventually, Denji is recruited by a public office tasked with hunting down devils capable of becoming a threat to the world.

Then, we meet Anzu who has the perfect high school life, every day she plays video games, eat snacks, and pets her beloved cat. In Romantic Killer, her blissful existence is turned upside down when a magical creature transports her to an altered reality bereft of her favorite things. To make things worst, now she’s stuck with hot guys all around her.

Finally, after their loss at the 2018 World Cup, the Japan team is having trouble regrouping. In Blue Lock, the team searches for a striker who can lead them to victory. The Japan Football Union has a plan and has gathered the best 300 players in the country, looking for the striker who can turn the tide of an almost lost game into victory.

And for those who can attend the movie theater, you want to see: Gekijouban Sword Art Online: Progressive – Kuraki Yuuyami no Scherzo, Suzume no Tojimari, Bokura no Yoake, Gekijouban Tensei Shitara Slime Datta Ken: Guren no Kizuna Hen or The First Slam Dunk.

As usual, I invite you to look ahead, with the desire to live better times, with health and peace for all.