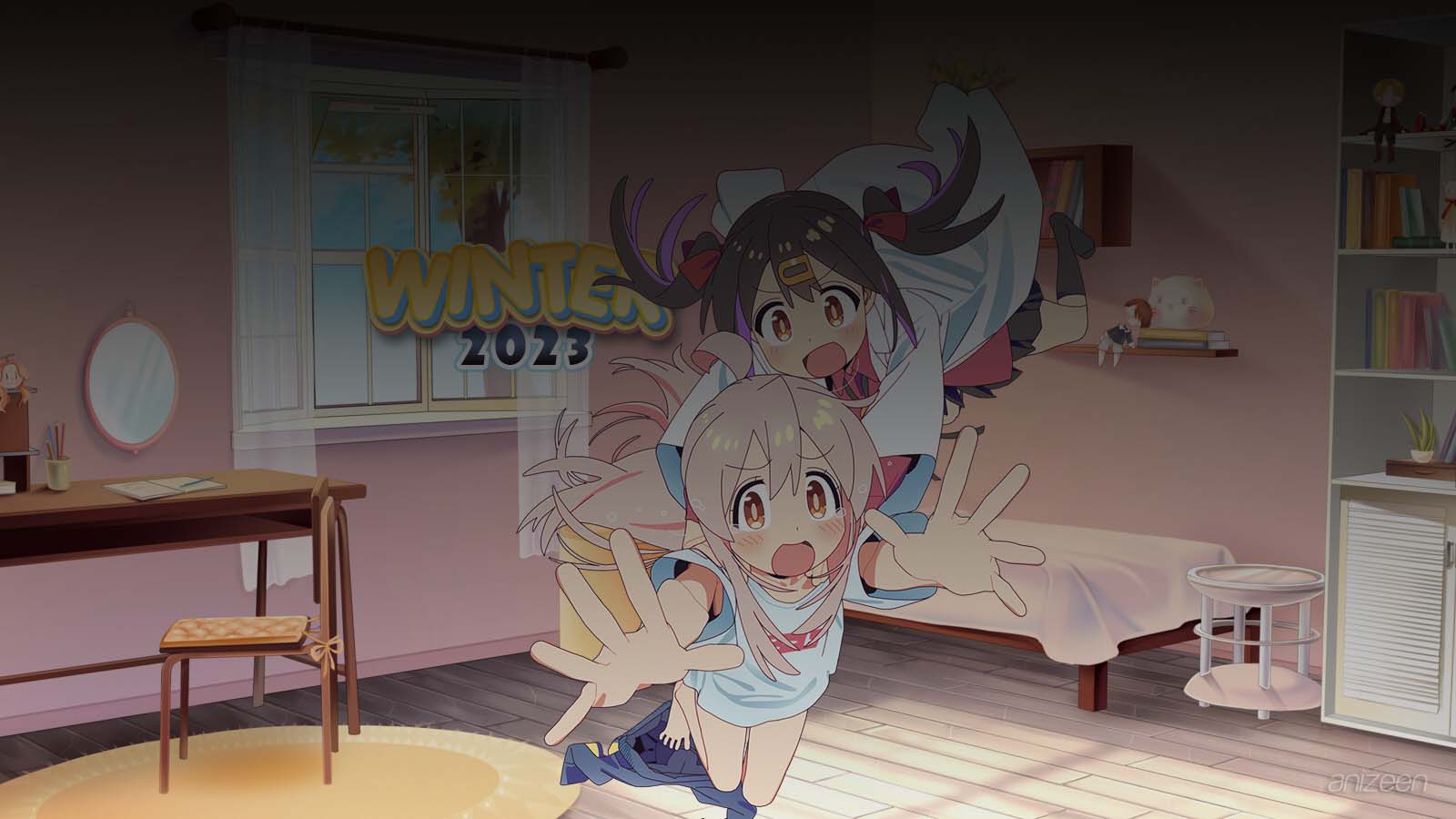 If we thought 2021 was difficult, 2022 proved us so wrong, the health crisis is far from over, vaccines helped many of us, however, they were not available for everyone. And then comes Putin, and we are back in the 1960s.

Now, let’s talk about anime, the year ended with a slow season, but the Winter Anime Season 2023 seems to start quite fast with many new titles.

We begin the new year with Mahiro, who seems to be a normal guy, with a kinky mind of his own. In Onii-chan wa Oshimai!, this adult gamer wakes up in the body of a girl. Mihari, his younger sister has used him as a test subject for one of her experiments, and now she is not sure how to turn him back.

Then, Himuro shows up, and he is a descendant of ancient yuki-onnas, but today, he is a newbie office worker. In Koori Zokusei Danshi to Cool na Douryou Joshi, every time he feels emotionally overwhelmed, he ends up causing blizzards around him. And now that he has feelings for his unique coworker Fuyutsuki it gets worse. On the other hand, Fuyutsuki seems to be really cool, and is also curious about Himuro.

Meanwhile, in a different world, Nick’s life is crumbling down. In Ningen Fushin no Boukensha-tachi ga Sekai o Sukuu You Desu, despite all his expertise as an adventurer, his leader decides to kick him out, if this was not enough, his girlfriend dumps him, and his teammates shamelessly accused him of embezzlement. Heartbroken, he decides to join forces with other disillusioned adventurers and form an unstoppable party.

Then, in a world of magic, Ray is meant to inherit the title of the most powerful sorcerer in the world. In Hyouken no Majutsushi ga Sekai o Suberu, after a big war, he banishes traumatized, years later he enters the Arnold Academy of Magic, where he is judged and scorned as an ordinary man.

Having said that, one day the crown prince Siegwald is able to listen to the voice of the Gods inside his head. In Tsundere Akuyaku Reijou Liselotte to Jikkyou no Endou-kun to Kaisetsu no Kobayashi-san, because of her sharp tongue, his fiancée Liselotte is has turned into a villainess and is destined to meet her demise. He must do something to save her, however, the Gods are actually a couple of high school students.

Later, in a classic reincarnation story, Hikaru dies of a serious illness and God decides to give him a second chance. In Isekai Nonbiri Nouka, Hikaru with his health and youth back, he decides to become a farmer, but not any kind if farmer, one in a fantasy world.

And there is nothing more fantastic that a Demon Lord, and despite being raised by one, Dariel cannot use magic and ends up useless for its brother, the new Lord. In Kaiko Sareta Ankoku Heishi (30-dai) no Slow na Second Life, after he rescues Marika from a monster, he starts to realize that he may be more powerful than he thought.

In a sudden death experience, Mitzuha falls off a cliff and ends up in a medieval world. In Rougo ni Sonaete Isekai de 8-manmai no Kinka o Tamemasu, after a close encounter with death, she realizes how to transport between her original world and this one. Now, she is planning a way to retire comfortably, but need to save a lot of gold coins to do it.

Followed by a great war, countries now battle using professional spies. In Spy Kyoushitsu, Klaus, an especially capable young spy loses his mentor, and now has inherited his mission. He is told to assemble his own elite spy team and infiltrate a neighboring country. Klaus agrees; however, his new team is more “incompetent” than “elite”.

In the meantime, in a chaotic time during the XIX century, Wisteria continues her desolate existence on her own. In Nokemono-tachi no Yoru, one day she finds a powerful, but equally lonely immortal being. Together, they are in search of a place where they can live together in peace.

Now, in a high school setup, Tomo and Junichiro have been best friends forever. In Tomo-chan wa Onnanoko!, she has decided to become more than friends, but Junichiro sees her as a pal, one of the guys. Tomo is not exactly feminine, and every time she tries to demonstrate her affection to Junichiro, things turn physical in an awkward way.

And if you like awkward stories, one day, our protagonist wakes up in the body of a dog. In Inu ni Nattara Suki na Hito ni Hirowareta, he wakes up as the pet of his crush, Karen, who acts cool and reserved at school but is quite caring to his dog at home. He wants to return to human form someday, but there’s something great about being cared for by the person he loves.

In a different kind of love, we meet Amane, who lives alone in an apartment. In Otonari no Tenshi-sama ni Itsunomanika Dame Ningen ni Sareteita Ken, and the most beautiful girl in school, Mahiru, lives next door. However, they rarely talk, until the day Amane sees her in distress during a rainy day and he decides to lend her his umbrella. To return the favor, she offers him help around his place, and they start to get closer.

Out again in a fantasy world, we meet Anne who is a candy crafter determined to follow in her mother’s footsteps and gain a title bestowed only by royalty. In Sugar Apple Fairy Tale, in order to travel to the capital and realize her dream, she purchases Shall Fen, a handsome but foul-mouthed fairy, as her bodyguard.

Back in time, in the age of the sword, heroes and mythology, giant beasts are hunted by humans for profit. In Ars no Kyojuu, Jiro makes his living that way, and one day he encounters Kuumi, who is being chased. Jiro decides at that moment to save her, and then they learn some rumors about humanity and a mysterious experiment, now they want to discover the world’s secrets.

Finally, in a distant future in 5012, the sudden invasion of Earth by aliens and their creations, known as Machine Lifeforms, led mankind to the brink of extinction. In NieR:Automata Ver1.1a, The surviving number of humans who took refuge on the moon to organize a counterattack using android like 2B and 9S to recapture Earth.

For the movie fans, buy your tickets for: SSSS.Gridman Gekijou Soushuuhen, Kagami no Kojou, Meitantei Conan: Haibara Ai Monogatari – Kurogane no Mystery Train, Soukyuu no Fafner: Behind the Line or Kin no Kuni Mizu no Kuni or Eiga Doraemon: Nobita to Sora no Utopia.